Blue Microphones, who is now a fully owned subsidiary of Logitech, has officially revealed has released a miniaturised successor to their most popular microphone, the Blue Yeti.

With a price tag of $99, the Yeti Micro is designed to cater to the same market as its bigger brother, which is already a favourite of YouTubers and amateur podcasters, offering users an excellent balance between audio quality and pricing.

The Yeti Nano is designed with a USB interface and a zero-latency output, integrating a volume wheel and mute button into the device while offering both Cardioid and Omnidirectional modes, dropping the Stereo and bidirectional modes that are supported by the larger Yeti. The Yeti Micro is designed with support for Blue's Radius III mounting system.

When compared to the full-sized Yeti, the Yeti Nano offers higher recording sample rates, offering 24bit/48kHz support, whereas the Yeti only supports 16bit/48kHz sample rates. Alongside this, the Yeti Nano also supports Blue's Sherpa companion app, which allows users to fine-tune their microphone in a hands-free manner, allowing the Yeti Nano to be muted, and adjusted from a PC. This change makes the microphone much easier to adjust, replacing the fiddly on-microphone dials with desktop-based sliders. 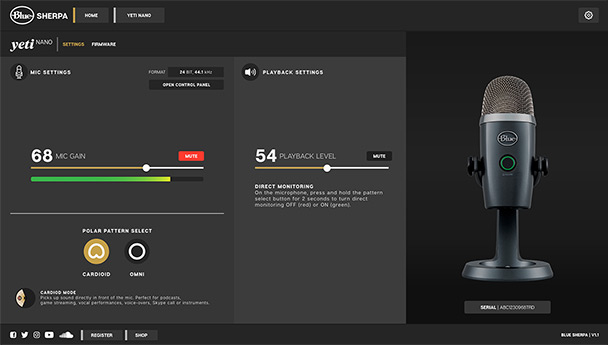 Starting today, Blue's Yeti Nano is available from the Blue website and selected retailers in the US for $99, with Blue offering Shadow Grey, Red Onyx, Vivid Blue and Cubano Gold colour options.

You can join the discussion on Blue's Yeti Nano microphone on the OC3D Forums.

Warchild
I think you mean Logitech has shrunk it

Not sure why they would shrink such an iconic product. Unless this was a materials cost cutting necessity?Quote

NeverBackDown
Quote:
Because not everyone wants a giant cucumber shaped microphone in there faceQuote
Reply