We've been having a lot of news about Cryptocurrency lately. This is partly due to the effect it has on anyone who has a spare warehouse full of GPUs, but also how that sudden drop in demand is effecting pricing for those of us in the market for a new card.

If you've been unaware, China have recently had a major crackdown on the resource usage of some cryptocurrency mines in areas with the cheapest electricity. This has led to many shutdowns of enormous farms which has had a rather obvious knock on effect on the amount of this currency being mined at all.

Etherscan is a website which tracks the current hash rate of that particular coin, and in the last month has seen an enormous fall in the overall hash rate, perhaps indicating that Ethereum is no longer as profitable as it once was. 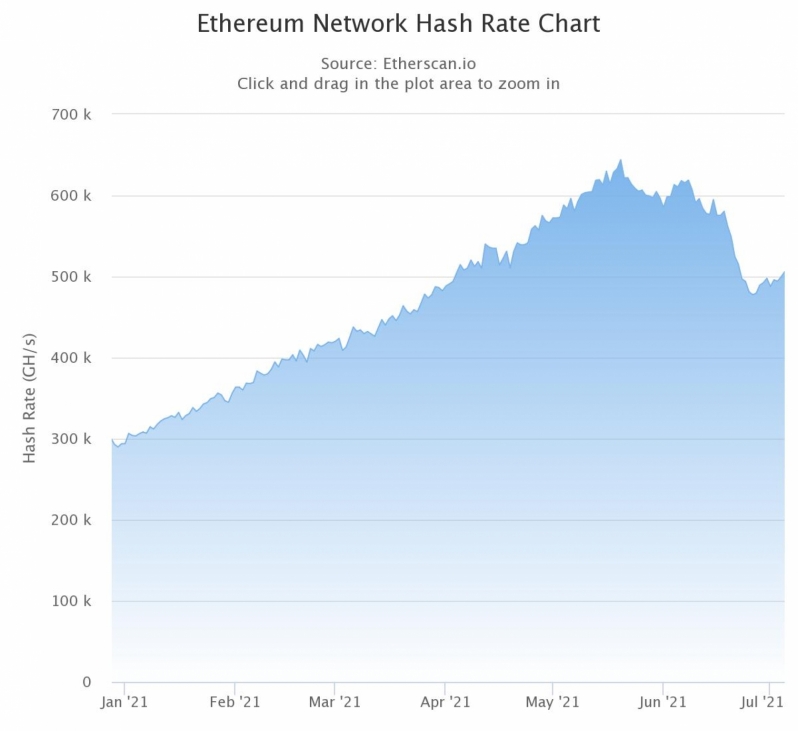 If you're of the opinion that cryptocurrency mining is only a similar idea to the old days of [email protected] or [email protected], with a couple of people in their bedroom on a computer or two whirring away, then the above graph should give you a clear indication of the scale of cryptocurrency mining. Remember this is just a few farms in China that have been closed, and there is about a 140000 GH/s drop in efficiency.

Sad that this is going to be a hit in your pocket, or pleased that this cynical burning of the Earth's resources in the quest for more profit is finally being reined in? Let us know ion the OC3D Forums.

grec
Considering Chinese miners account for 80% of the worlds organised mining pools, and China has effectively banned the ability to profit from them there by cracking down on bank transactions, you'd think this would be a bit of a larger drop, their crackdown there is nearing a ban on global organised mining until any large surviving pools move.

Unfortunately this likely means mining will move to much less environmentally friendly areas than the regions of China that were profitable for crypto-mining, but it does free up a chunk of China's renewable resources at least, not a huge chunk of course as China produces more renewable energy than any other country in the world, but enough to make a difference on their ability to meet the Paris climate agreement targets without too much expense.

The long term value for Ethereum is likely unchanged as it's been on track to switch away from the mining based PoW model for a few years now, with the switch to miningless and miniscule energy use PoS tech now deep into progress and due to complete by the end of the year.Quote

meuvoy
Quote:
If the US government suddenly said US residents weren't allowed to buy meat, everyone wouldn't just immediatelly obey! Some would be glad it happened, some wouldn't mind it and immediately obey, some would stock meat, some would just keep buying, etc, etc. Some people need to feel the consequences of their actions to take warnings and laws seriously, some others prefer to just move somewhere else, while some will wait a little to see if the decision isn't revoked. So no, it actually looks like the curve is going down as expected. and should keep trending down for a while.Quote

grec
Quote:
I get your point, but not being able to withdraw money into your local usable currency, because your bank is blocking any crypto related transactions, and then inevitably having police raid and physically close your business, if not already, is a bit different to just being told not to do something by law, I just thought China's crackdown would show through a little quicker.

Of course given as a drop was already inevitable as the mining profitability was already planned to be hashed this August with the EIP-1559 update (for the transition period leading up to the PoS switch coming up), it's soon going to be hard going to be say what influence on this chain China had vs the impact of the Ethereum developers plans, as both are intended to phase out the mining, just for different reasons.Quote

ET3D
A larger percentage of Bitcoin was mined there than Ethereum, so Bitcoin was affected more.

Hopefully the move to PoS on the side of Ethereum will start an avalance that will make mining drop all over.Quote
Reply