7nm and Zen 2 are coming to the mobile market, and it could be a gamechanger

AMD's Zen 2 architecture has already shaken up the desktop, enterprise and high-end desktop market, but in the mobile space, Intel remains king. That said, Zen 2's next target should have Intel worried, as Zen 2's performance/watt gains should grant AMD a solid position within 2020's notebook market.

_rogame on Reddit has spotted AMD's upcoming Ryzen Mobile 4700U on the 3DMARK and PCMARK databases, revealing a processor with eight cores, no SMT (8-threads), and a capable Radeon graphics component. _rogame has also reported that Xiaomi, Acer and HP are testing next-generation AMD mobile CPUs, which are said to support 2666MHz and 3200MHz DDR4 memory.

Ryzen 4000 series processors are due to be revealed at CES 2020, allowing AMD to bring Zen 2 to yet another market. Intel has been dominant in the laptop market for almost a decade, and the combination of TSMC's 7nm silicon and AMD's Zen 2 architecture are due to bring that dominance into question, especially given Intel's processor shortages.

What remains unknown is the exact specifications of AMD's next-generation Ryzen mobile SKUs, the architecture used for the processor's integrated graphics (Vega or Navi?) and what TDPs AMD plan to target. 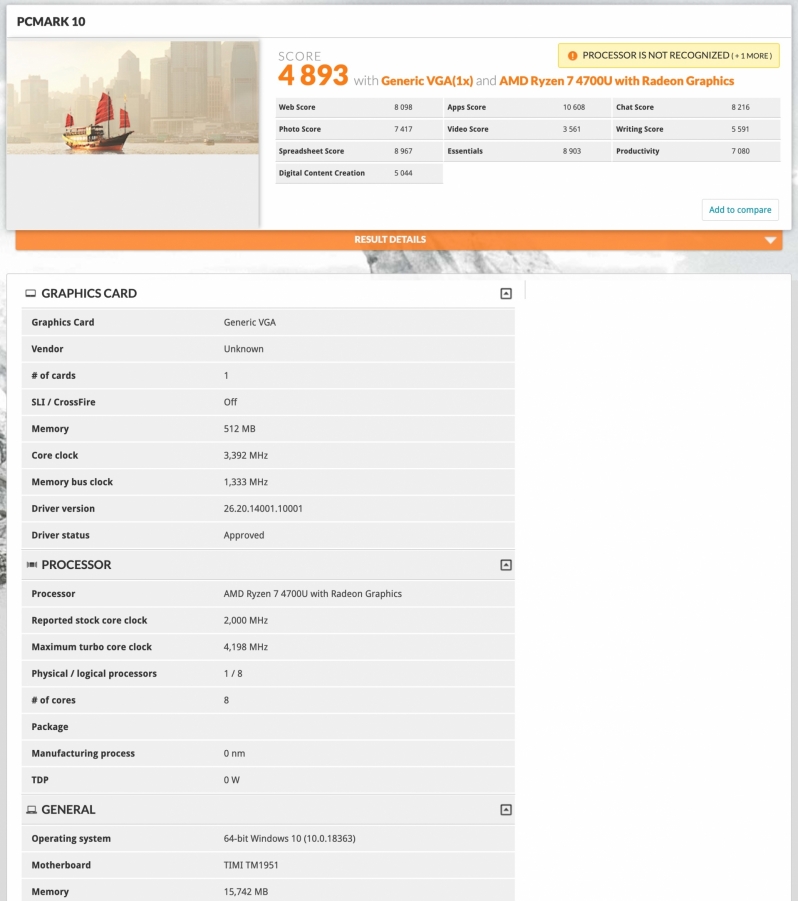 AMD's Zen 2 architecture has brought big changes to every market where it has been introduced, making it a huge success for AMD despite some early platform issues. In the notebook market, Zen 2 will allow AMD to deliver some much-needed competition for Intel, which should eventually lead to better pricing for consumers, especially on the high-end.

You can join the discussion on AMD's 8-core Ryzen 4th Generation Mobile Processors on the OC3D Forums.