Intel's offering some significant design improvements, but those improvements have a cost...

Alder Lake will utilise an LGA-1700 socket design, a socket that is much larger than Intel's recent mainstream socket designs. This design change will make Intel's new CPUs larger and more rectangular, creating the need for new CPU cooler mounts.

Alder Lake's new LGA-1700 socket has a new cooler mounting pattern, requiring heatsink manufacturers to create a new mounting system for Alder Lake. On top of that, Alder Lake has a lowered Z-height, a change that will require CPU coolers to be mounted lower than before.

With LGA 1200 mounting system uses the same mounting hole pattern as all of their mainstream LGA sockets since at least Sandy Bridge, giving Intel's current design a longstanding legacy. This will make Intel's moves with Alder Lake unexpected for many, though such a shift is not exactly unwarranted after a decade of support for Intel's current mounting pattern. A change needed to happen eventually, so why not now?

A lowered Z-height is good news for PC builders

Lowering the thickness of their processors lowers the amount of thermal resistance between Intel's CPU silicon and the user's heatsink. This allows heat to be moved more efficiently away from the user's processor, lowering load temperatures while reducing the need for delidding or IHS thinning. In short, this design change should make Intel's future processors easier to cool, and that is great news for PC enthusiasts and overclockers. 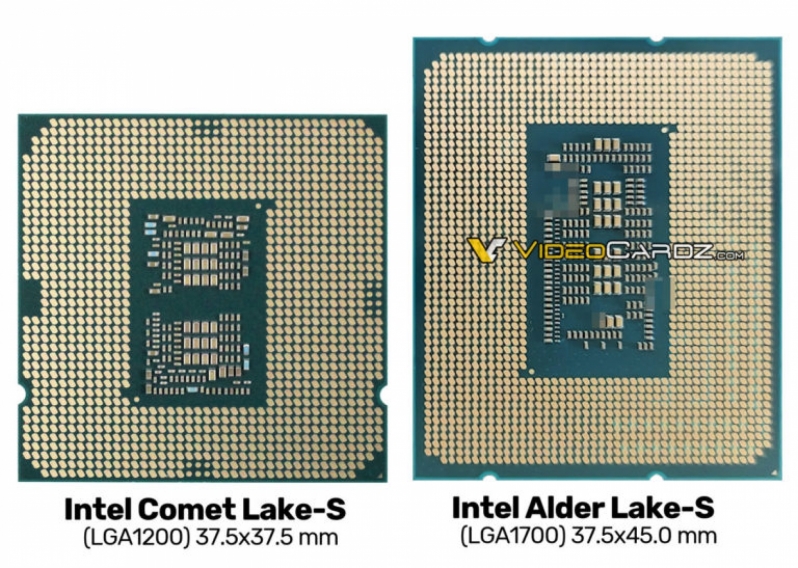 While Intel's move to a new mounting system will be inconvenient, it is hard to claim that this move is unnecessary. Today's mounting system has been supported for over a decade, and Alder Lake's larger form factor has forced Intel to change things up.

You can join the discussion on Intel's Alder lake CPUs requiring new CPU cooler mounts on the OC3D Forums.

looz
Looks to be a thinner PCB as well. Gotta be a bit careful when delidding.

Warchild
Quote:
Thinner pcb is risky. We all know how bad skylake went when users were seeing damage and poor performance. I guess we will not know until release.Quote

AngryGoldfish
I imagine many will be doing a complete re-build with Alder Lake as it's Intel's first true new architecture in years.Quote
Reply