Being a water cooling focused company Alphacool has also kitted out their frames with support for up to six 360mm water cooling radiators, allowing users to water cool all 12 GPUs connected to the system. While this may seem silly to some, many GPUs are more efficient under water cooling, and the reduced thermal stress on the mining hardware may increase the lifespan of each mining card in the system.

The Mining Rig 12 has also been designed stacked on top of each other using a screw mount system to securely place large collections of mining hardware in a single location while offering enough open space to replace faulty equipment or upgrade mining systems quickly.

Alphacool has integrated seven fan mounting locations across the chassis, directing airflow around each of the system's GPUs and the system's power supplies, ensuring that each component receives optimal airflow and that GPU performance will not suffer due to thermal constraints. 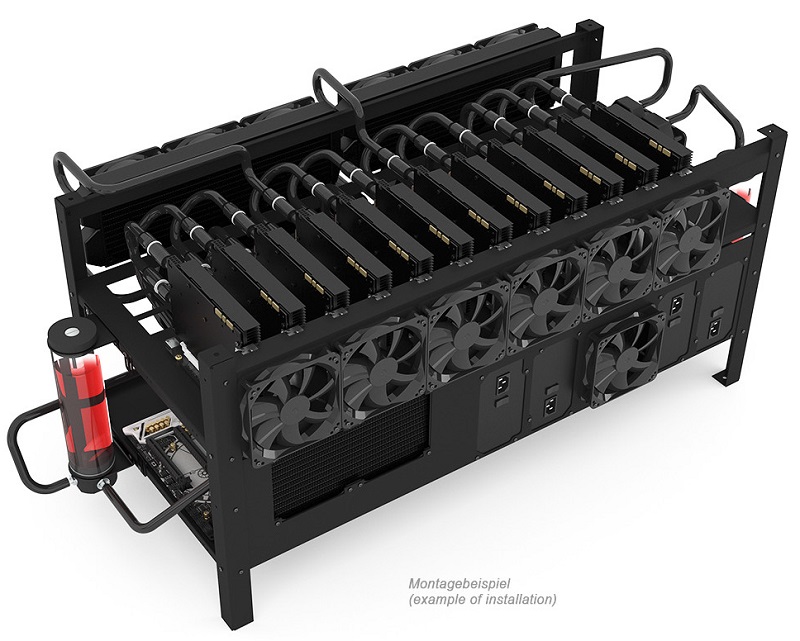 While many of you will have your own opinions about GPU mining, it is undeniable that Alphacool has created an incredibly functional mining frame, keeping GPU equally spaced while providing mounts that will suit almost any mining configuration. The only problem that we can foresee is reduced demand from miners, given recent drops in GPU demand and pricing.

Alphacool's Mining Rig 12 is available for €148.79 on the Alphacool web store.

You can join the discussion on Alpahcool's Mining Rig 12 water-cooling ready mining frame on the OC3D Forums.

Piskeante
they sell this when mining is not profitable.

WYP
Quote:
If mining is anything it is unpredictable, the mining craze has ended and restarted several times now.Quote

Avet
I don't think that people who are mining will stop. I have few friends who continue. They just don't sell as often as they did when the craze was on. What have we learned from the past year or two? It is always good time to start mining.Quote

WYP
Just found this on Twitter. Does anyone else think this will look like a mini bunk bed when stacked?

Layer Cakes
Can someone explain why on earth you would WC a mining rig? Surely its just going to hurt ROI and introduce more potential points of failure?Quote
Reply