be quiet! ventured into the world of All-in-One (AIO) liquid coolers in 2016, offering customers a great mix between pricing and performance while providing low noise levels. That said, their lineup lacked modern features like RGB lighting, and over time technology has moved on to allow more efficient liquid cooling solutions to be created. That's why be quiet! has created their new Silent Loop series of liquid coolers.

With their Silent Loop 2 series of liquid coolers, be quiet! has invested in a new pump design which has allowed them to increase unit performance and decrease the noise output of their closed-loop liquid cooler design. In addition to these changes, be quiet! has also allowed their users to reduce the input voltage range of their heatsink to 9V, allowing for lower noise levels when compared to the Silent Loop 2's stock 12V power input.

To ensure the longevity of their units, be quiet will provide users of their Silent Loop 2 a bottle of cooling fluid, which can be used with the Silent Loop 2's refill port to ensure that their unit is always filled and running under optimal conditions.

With their Silent Loop 2 series, be quiet! has designed their units to support all mainstream CPU sockets, with the only exception being AMD's sTRX4 socket. be quiet's Silent Loop 2 AIO liquid coolers will be sold from April 6th and a standalone sTRX4 will be made available for these units in June 2021.

You can join the discussion on be quiet's Silent Loop 2 series of liquid coolers on the OC3D Forums. 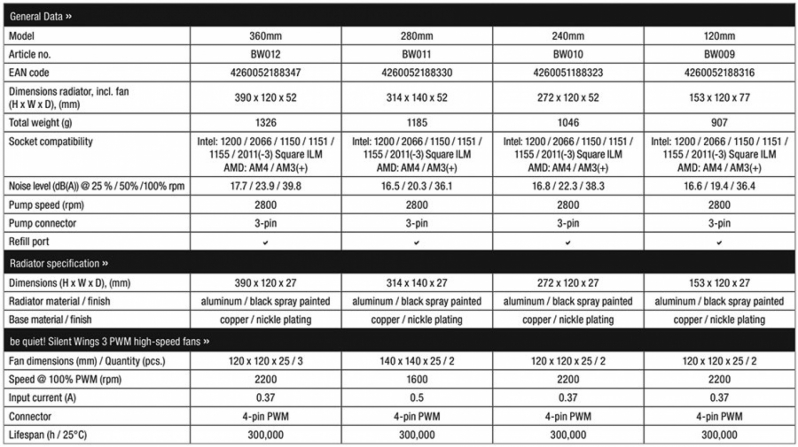 g0ggles1994
Sod the RGB, I think they look pretty boss!Quote

NeverBackDown
Gotta agree these look pretty good. That pump is just class. Not over the top and can still get you nice rgb accents.Quote

Excalabur50
They do indeed look quite classy and understated, very nice.Quote

looz
Depends on what that brushed aluminium look-a-like surface is made of. Plastic replicas of it tend to look fairly awful in person, and same goes for some junk grades of metal.Quote
Reply