Cooler Master's High Air Flow series is shifting its focus to GPU cooling. Will it work?

At Cooler Master's Summer Summit event, the PC hardware manufacturer announced that they are working on new HAF (High Air Flow) series enclosures, one of which is their new HAF 500.

While Cooler Master has confirmed that " a flagship HAF product is also in the works", the HAF 500 appears to be everything that most PC builders would want from a new airflow-optimised enclosure, promising to deliver ample cooling performance for even the hottest PC hardware.

Sadly, the release timeframe and pricing of Cooler Master's HAF 500 remain unknown, but that doesn't mean that the chassis itself is a mystery. You can see for yourself that this enclosure will feature a left-mounted tempered glass side panel, Black and White options, a large mesh front panel and two beastly front-mounted 200mm ARGB fans.

Based on the image below, we can also see that the top plate of the HAF 500 is designed to be removable, a factor that will make the installation of liquid cooling radiators and fans a simple process. This will be especially true for PC builds where motherboards and other components are already installed.

Cooler Master doesn't appear to be making many mistakes with these new HAF case designs. The company has stated that this enclosure design is the result of "Community Collaboration", where Cooler Master has sought feedback from their "community of builders, reviewers, and TechTubers". This case is designed by PC enthusiasts for PC enthusiasts. 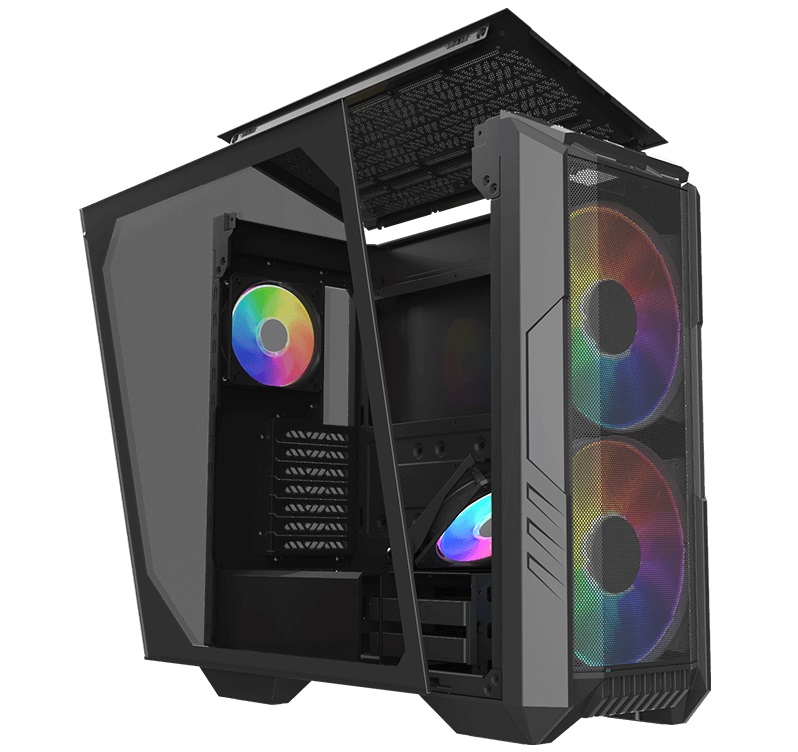 Modern graphics cards consume a lot of power, with the latest GPUs from both Nvidia and AMD pushing TDPs beyond normal limits on the high-end. These heightened power requirements call for stronger GPU cooling solutions, and Cooler Master has taken note of this.

With their HAF 500, Cooler Master has added an internal 120mm fan to their enclosure to allow users to direct more airflow into their graphics card. In theory, this dedicated GPU airflow channel will help modern graphics cards achieve lower thermals under load, potentially allowing them to run quieter and at higher performance levels through technologies like Nvidia's GPU Boost.

Cooler Master is focusing on the Airflow aspect of their HAF design philosophy, and that is great news for consumers. Should TDPs rise again with the next-generation offerings of AMD and Nvidia, the HAF 500's dedicated GPU airflow feature will become an even larger selling point for the enclosure. 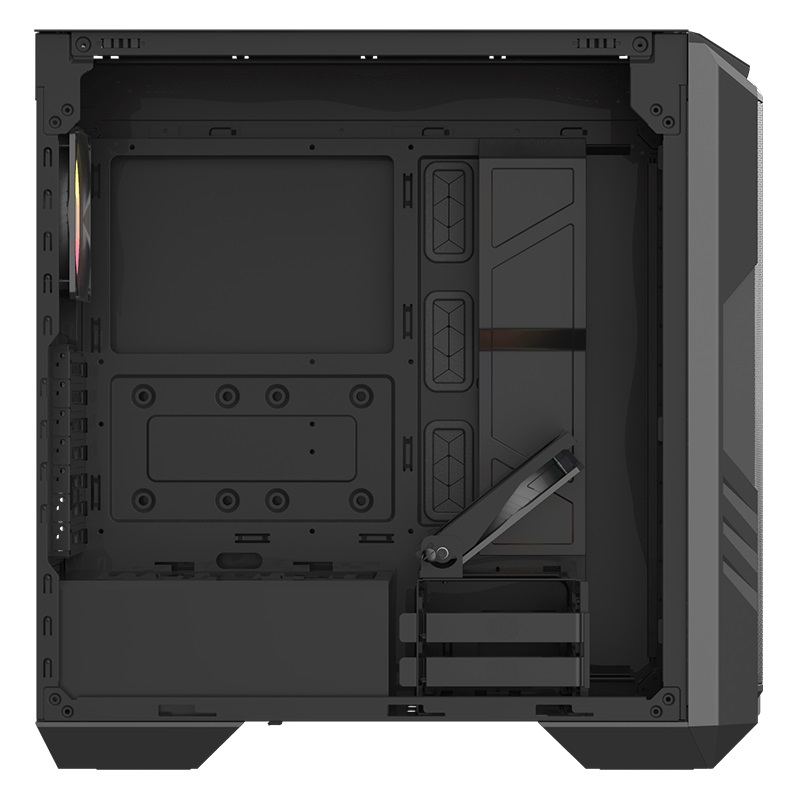 Cooler Master's HAF 500 appears to be the perfect case for today's PC market, focusing on airflow and cooling at a time where performance is critical, and the TDP of high-end products appears to be rising. Only time will tell of Cooler Master has been able to achieve its design goals with the HAF 500, but so far, things are looking good for the HAF series.

You can join the discussion on Cooler Master's new HAF 500 PC Case on the OC3D Forums. 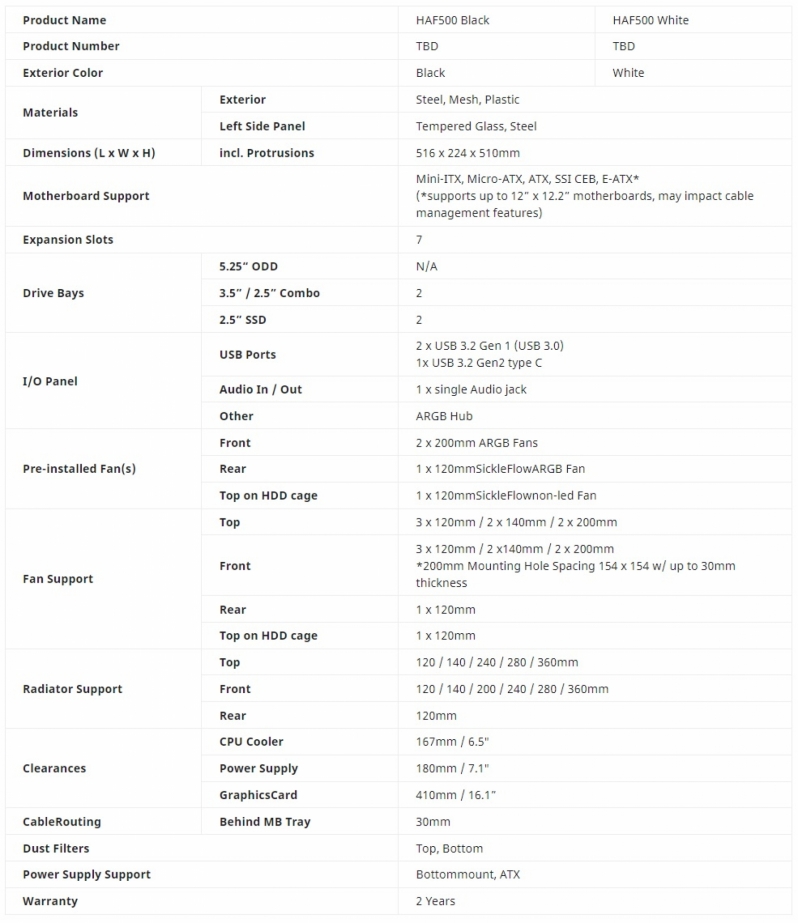 dazbobaby
I've never understood why GPU's now have their heat firing down, it only rises back up to the GPU.


Back in the ISA/VLB days the GPU vented upwards.


Is it written in law or a standard somewhere that GPU's must vent heat down?


Also, what happened to the old desktop case that you could sit a monitor on?Quote

Warchild
Quote:
What do you mean heat firing down? Heat is push outwards throught the sides of the gPU or out the back of the case. GPU upside down allows heat to also dissipate upwards through the back side of the PCB

Deadtroopers
I can already hear Tom on the PSU shroud and drive cage! :-)


We'll have to see on review abut performance, but past HAFs had all the aesthetic appeal of a humvee and this looks just yawn. Sure they consulted, there are a couple of companies that Tech Jesus shouts out as wanting feedback and reading the coments when he is on his Taipei jolly. I don't recall CM ever being one of them. This looks like just another a minor tweak of the usual metal box. Thermaltacky comes to mind.


A case wide enough for 200mm fans with 120mm rather than 140mm fans elsewhere? Yeah right.


Graphics cards are just as much about a shroud you can't see in a regular orientaton. I'd flip them just for that reason. Still, a case wide enough for 200mm fans should be wide enough for a vertical installation that won't compromise a three slot card. We'll have to see.Quote

dazbobaby
Quote:
I had no idea, I honestly thought the were blowers and not suckers

Every day is a school day, thanks for the lesson.Quote
Reply