EK confirms that it has Air Coolers in the works

EK confirms that it has Air Coolers in the works

EK Water Blocks has confirmed to us that it plans to create air coolers in the future, showcasing the following image at their EK Cooling Expo, an online event which replaced EK's usual Computex 2020 presence.

After speaking with EK representatives, we were told that the company discussed "only the bare minimum" of their air cooling plans at their expo, stating that their "product design isn't finished" yet.

What we can see below is a design for an EK heatsink which has not been finalised at this time. Understandably, EK wants its first air coolers to meet the same quality standards as the company's other products; and doesn't want to reveal too much information about their upcoming products before they are ready to release.

EK has confirmed that this product is legitimate and that its design is a work in progress. At this time it is unclear how many heatsinks EK are designing, or how much these heatsinks will cost when they eventually release. Will EK become a competitor of Noctua within the air cooling market? Only time will tell. 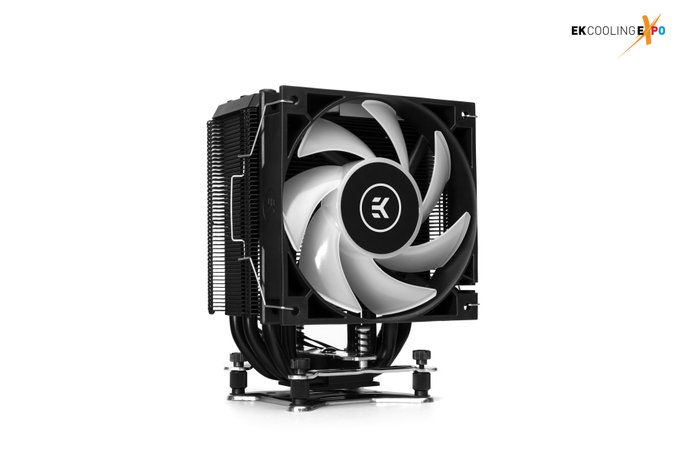 You can join the discussion on EK's plans to enter the air cooling market on the OC3D Forums.

Warchild
Guess they are losing market share to aquacomputer etc so need more products in their catalogue.Quote

Damien c
Smart move considering most nVidia GPU's these days if you buy aftermarket really don't "need" watercooling yeah there maybe some benefit in terms of noise and potentially a little more overclocking, and AMD GPU's yes they benefit quite abit from watercooling but will that be the case with the next ones who knows.


CPU's are getting to the point where they either don't need to be overclocked or just simply cannot be overclocked, without the need for Phase Change or LN2 to actually get some worth out of overclocking for everyday use.


Not to mention yes there blocks might look nice, but more importantly the performance can be matched or beaten by cheaper blocks or better looking blocks.


I like the radiators they make, but to be honest if I was going to go full custom watercooling again which I will probably at some point, it's only going to be the CPU and the block will be a Heatkiller.Quote

The_Crapman
Quote:
I think if anything EK have been doing really well considering the amount they're pouring into r&d. Aquacomputer have really slacked off the block market and seem to be concentrating on pumps, sensors and controllers, Alphacool really hurt themselves sticking to that modular gpu block design and unflattering CPU blocks, Watercool and recently Corsair have picked up some of that, some influx from China with bitspower, byski and barrow, but generally I see a lot more builds full of ek than anything else. They must have sold a good 500k O11D distro plates alone! lolQuote
Reply