One of the biggest problems with custom water cooling is the fact the barrier to entry, offering a difficulty spike when compared to building a PC with a standard AIO liquid cooler or with an air-based heatsink design. Newcomers to PC building will feel uncomfortable introducing custom liquid cooling to their PC, as any loose fittings could spawn a leak and potential catastrophe.

All of these units will use copper components and contains an EK-made coolant, removing the choice of coolant from the equation entirely, removing the need to choose a custom coolant and all the potential compatibility concerns associated with this decision.

Radiator-wise, EK is offering 120mm, 240mm, 360mm, 140mm and 280mm options, all of which comes with a built-in pump. Adding an extra radiator into your system will also deliver additional pump power, making this system suitable for complex multi-rad configurations. 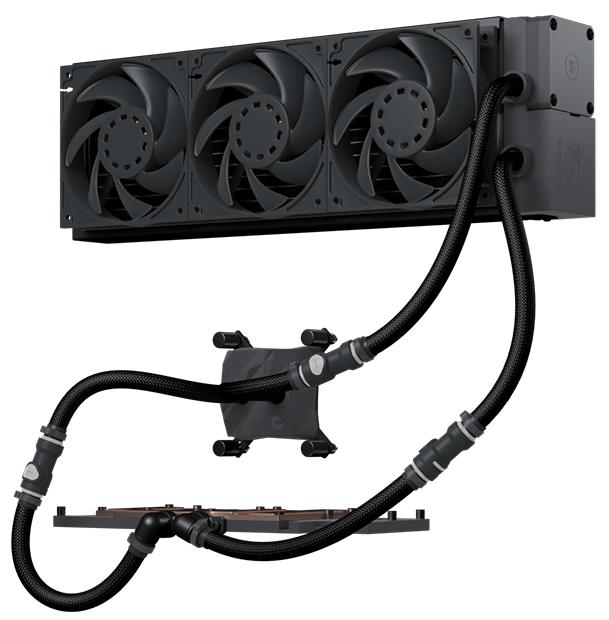 You can join the discussion on EK's new MLC Phoenix series of modular pre-filled liquid coolers on the OC3D Forums.

Excalabur50
These look pretty good and would be good for beginners into the water cooling world, lets just hope they don't leak like one of their previous units did.Quote

138e for the 120mm rad version... depends what pump it is I might pick one up. Perfect for my ITX build.Quote

AlienALX
Quote:
The problem with it is the hoses. There are no specific units. So for example you can't pick ITX, MATX, full ATX and so on. Meaning the hoses are going to be a set length "one for all" and thus you will have spaghetti in your ITX. It's worsened by the fact that the GPU and block are not G 1/4 (or at least don't look like it) so you can't cut the hoses I don't think.

I dunno. It's been proven time and time again that real water means real water. IE - you need to use fittings etc etc. They are trying to make some sort of boggy standard works for all kit which means it will be a Jack of all trades, master of none.Quote

AngryGoldfish
I was quoted €391 for a radiator, pump, quick-disconnects, tubing, fans, CPU block, coolant, and GPU block. That's not bad. That's great performance for your GPU, decent performance for your CPU (a dedicated 280mm AIO would perform better or likely even big air), low noise (hopefully) and decent looks. I think that's not bad at all. You're saving quite a bit of money compared to a custom loop and it's less hassle than a kit. The kit would also be more expensive than the MLC Phoenix, but a kit would look better and offer more options for only slightly more money.Quote
Reply