In recent years, EVGA has become a much bigger player within the PC cooling scene, complimenting their Intel-series motherboards with high-end All-In-One Liquid coolers.

To date, EVGA's largest Closed-Loop Liquid Cooler (CLC) has been their CLC 280, a 280mm offering that supports dual 140mm fans. At Computex 2019, EVGA has revealed that they plan to go large with their next-generation cooler offerings, revealing their CLC 360 liquid cooler.

As the name implies, EVGA's CLC 360 is a 360mm liquid cooler which utilises three 120mm fans for cooling. Up to six fans will be supported by this cooler using a push-pull fan configuration. Like EVGA's existing CLC solutions, the CLC 360 appears to be an Asetek-based design, which means that the cooler is likely to support all of the same CPU sockets at EVGA's existing cooling lineup.

EVGA hopes to reveal more details about their upcoming CLC 360 CPU cooler in the near future. 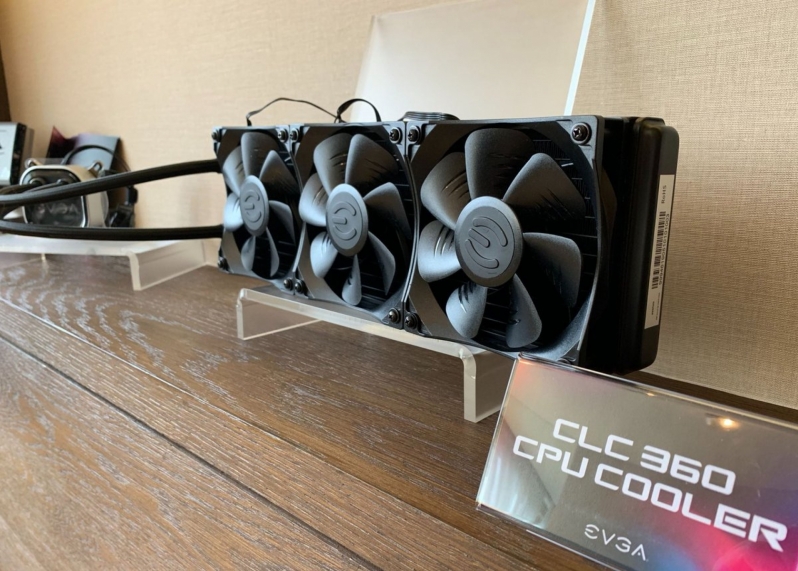 You can join the discussion on EVGA's CLC 360 CPU cooler on the OC3D Forums.

66racer
Wish they would change their fans, otherwise I like their AIO coolers and use them often but with Noctua fans.Quote

Warchild
Quote:
Whats special about their AIO? Its more expensive than others.

Not a snipe at you. Its a genuine question since replacing the fans anyway makes me wonder how this AIO is your preferred choice over others that are far cheaper.Quote

looz
I guess it's up to local pricing, EVGA 280 was the cheapest option when I bought it.
Until I bought new fans for it, which made it carry a price premium. But the stock ones are horrendous.Quote
Reply