AIO Liquid Coolers for both Intel Core and AMD Ryzen processors - Even LGA 1200!

At CES 2020, MSI has announced that they plan to return to the CPU cooler market, revealing two new closed-loop liquid coolers (CLCs) to create their new MAG Core Liquid series.

As it launches its MAG Core series, MSI is showcasing a clear focus on performance. MSI has decided not to release a 120mm variant of its MAG Core, opting instead to focus on its 240mm and 360mm variants, which promise to support all of today's consumer-grade CPU sockets. MSI has even confirmed that its MAG series will support Intel's LGA 1200 socket, a CPU socket which Intel hasn't officially announced. Naughty.

Like many of its peers, MSI has decided to embrace RGB lighting with its MAG Core series, allowing users to choose from seemingly millions of colour options. While the rainbow vomit of many RGB computer ads may be offputting, it is worth remembering that RGB lighting is the only way to offer PC gamers exact choices for their preferred lighting shade. This feature enables user-defined colour matching using MSI's Mystic Light software. RGB is about user choice, and a lot of people forget that.

MSI's MAG Core series will ship with ARGB (Addressable RGB) LEDs on the cooler's fans and pump/block, which can be controlled using MSI's ARGB controller. This allows users of this cooler to have their MAG Core lit using multiple colours at once, making a spectrum of unique custom lighting effects possible.

When looking at the specifications of MSI's MAG Core Liquid series, we can see that the cooler's pump is designed to operate with noise levels which max out at 18dBA, while the units PWM fans are also designed to offer users "completely silent operation". However, these fans can ramp up to speeds of 2500 RPM is required, bumping up their noise levels fo 40.9dBA if users want to crank things as high as possible.

Below are the full specifications of MSI's MAG Core Liquid series of CLCs. 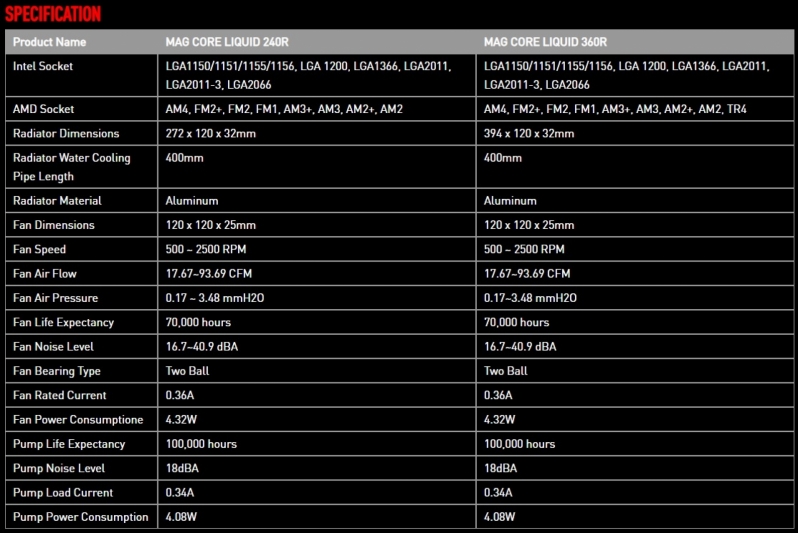 You can join the discussion on MSI's MAG Core Series of Closed-Loop Liquid Coolers on the OC3D Forums.

m2geek
Yuck, an ugly rehash of the Gigabyte AIO...Quote
Reply