Making it easier to keep your components cool

Noctua's NT-H1 has been one of the world's leading thermal compounds for over 10 years, cementing itself a legacy as a stable thermal compound which also delivers excellent thermal performance.

A lot has changed since 2007, and Noctua knows that they can improve upon their NT-H1 TIM (Thermal Interface Material), leading them to invest in the creation of their new NT-H2 thermal paste, which is designed to deliver improved performance thanks to a fine-tuned material mix and enhanced material properties.

Noctua's new NT-H2 TIM is designed to be used on processors for up to five years, offering non-conductive and non-corrosive properties to ensure that there is no risk of short-circuits or product degradation. The boffin's over at Noctua have also worked to decrease the thermal resistance of their NT-H2 thermal paste, as well as reduced bond-line thicknesses at typical mounting pressures.

The video below compares Noctua's NT-H1 Thermal Paste with the company's new NT-H2 thermal paste on LGA 1151, AM4, LGA 2066 and TR4 CPU sockets.

Further improving the award-winning NT-H1, Noctua’s NT-H2 thermal compound uses a new,
fine-tuned mixture of metal oxide micro-particles for even lower thermal resistance and reduced
bond-line thickness at typical mounting pressures. This allows it to achieve an even better performance
in most application scenarios, making it ideal for enthusiasts looking for that slight cooling edge.
This video shows you what kind of differences in performance can you expect to achieve and which
factors you should keep in mind when testing thermal compounds.

Performance-wise, Noctua's new thermal compound is said to offer up to a 2-degree decrease in CPU temperatures, with the most significant reduction in CPU thermals coming from platforms with large mounting surfaces, such as AMD's TR4 socket.

On smaller CPU sockets like LGA 1151, thermal differences are more marginal, thanks due to the socket's low surface area and the low TDP nature of products on that socket. Noctua's testing was conducted over several mounts, using averages to minimise the impact of changes in application quality during their testing. 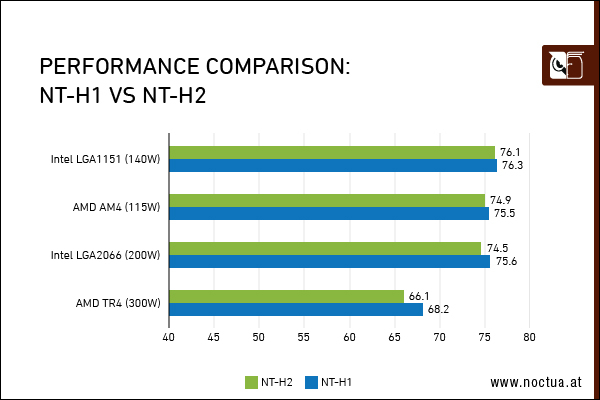 Noctua's new thermal paste lineup will be available at the following prices in the US/EU:

You can join the discussion on Noctua's new NT-H2 Thermal Compound and NA-CW1 cleaning wipes on the OC3D Forums.

looz
Neither the thermal paste or the wipes are brown, Noctua is completely disregarding their brand identity!Quote

Dawelio
So how does this actually stack up against other popular TIMs such as MX-4 or Thermal Grizzly Kryonaut?... I'm assuming the difference is marginal or next to none, amongst these tier one TIMs?Quote

NeverBackDown
There's not much separating them tbh. As long as they aren't conductive, really doesn't matter. Just a few C difference. You can do more by getting better fans and adjusting fan profiles tbhQuote

grec
Good thermal paste is great for upgrading laptops where you can't change much else, when I switched this old Thinkpad to a 45W quad core i7 model(The laptop only has a 35W cooler) I used some kryonaut and it's pretty much always at full boost clocks (3Ghz) while silent & cool.Quote

Dawelio
Quote:
Regarding Thermal Grizzly Kryonaut, just to clarify here and sorry for going a bit off topic, but is it non-conductive or not? Seems to be a bit of confusion around the web on that part.Quote
Reply