Noctua's expanding its all-black Chromax lineup of CPU coolers, releasing an AM4 variant of its low-profile NH-L9a CPU cooler, a favourite amongst HTPC users and small-form-factor (SFF) enthusiasts.

The NH-L9a-AM4 Chromax offers users the same basic formula as the original, offering users an ultra-short height of 37mm, quiet operation and the promise of 100% RAM and PCIe compatibility. This cooler is designed to not interfere with your case, DRAM, PCIe slots and other components within your compact PC builds, with this Chromax edition offering users some extra style with its all-black colouring.

In the UK, Noctua's NH-L9a-AM4 Chromax is available for £45.99 on Amazon UK. In the US, this heatsink costs $49.90 and in Europe this cooler costs €49.90. This heatsink will ship with Noctua's high-performance NT-H1 thermal compound and a 6-year manufacturers warranty. 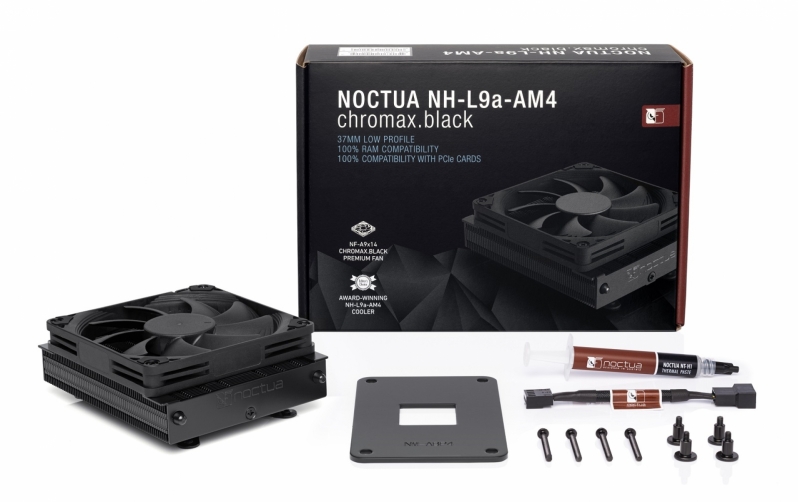 You can join the discussion on Noctua's all-black NH-L9a-AM4 Chromax CPU cooler on the OC3D Forums.

Warchild
Look at the contents though. Its just perfect.

Simple, slim. Elegant and black. Only thing I see odd is the sticker label on the 7v cable. But jeez this is a great product in every aspect.Quote
Reply