AMD's due to launch their Ryzen 7000 series processors later today, and to support this launch, Noctua has reconfirmed that all of their existing CPU coolers, except two, already support AMD's new AM5 socket.

AMD's AM5 CPU socket uses the same mounting position as the company's AM4 socket, allowing most AM4 CPU coolers to support AM5 out of the box. The only exception to this are coolers that utilise an aftermarket backplate, like Noctua's NH-L9a-AM4 and NM-AM4-L9aL9i, the only two AM4 compatible CPU coolers that do not support AM5 out of the box. That said, Noctua are working on a new mounting system that will enable socket AM5 compatibility for these heatsinks.

Currently, the vast majority of Noctua's heatsink lineup already supports AMD's AM5 socket, and soon the company's two exceptions will support AM5 though the use of mounting kit upgrades.

Below is what Noctua has to say about their support for AM5 on their website.

FAQ: Which Noctua CPU coolers are compatible with AMD AM5?

AM5 (LGA 1718) is AMD’s upcoming socket for its next-generation Ryzen 7000 (Zen 4) series processors. Please refer to our socket compatibility overview in the Noctua Compatibility Centre (NCC) to see which Noctua CPU cooler models support socket AM5 out of the box or via mounting upgrade kits.

In short, all Noctua coolers and mounting kits that support AM4 are upwards compatible with socket AM5, except the NH-L9a-AM4 and the NM-AM4-L9aL9i.

The NH-L9a-AM4 and the NM-AM4-L9aL9i are not compatible with AM5 because they require replacing the standard AMD backplate with a custom one, which isn’t possible on AM5. A dedicated AM5 upgrade kit for NH-L9a, NH-L9a-AM4 and NH-L9i coolers is in preparation. 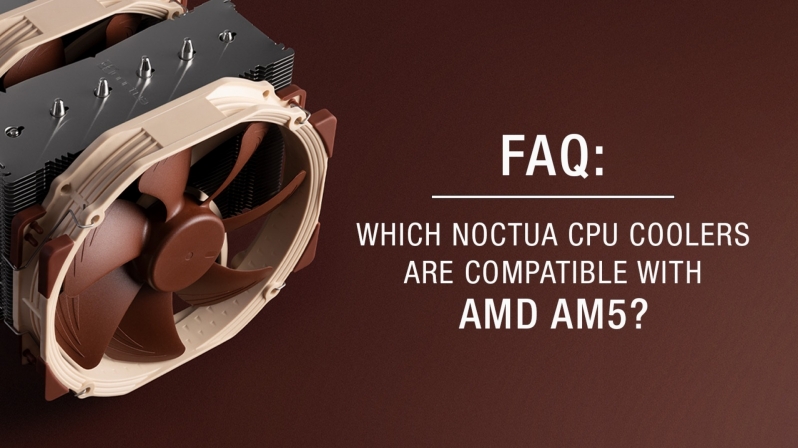 Noctua CPU coolers purchased before 2019 that lack AM4 socket support can be upgraded to support AMD's AM5 socket using Noctua's NM-AM4 or NM-AM4-UxS upgrade kits. These kits deliver AM4 support to these CPU coolers, and therefore AM5 support.

Is my Noctua CPU cooler compatible with AM5?

Using Noctua's "Compatibility Center" webpage, PC builders should be able to check if their Noctua heatsinks will support AMD's new AM5 socket. It should tell you whether or not you will need an AM4 upgrade kit, or if your CPU cooler will be compatible with AM5 out of the box.

You can join the discussion on Noctua's AM5 socket compatibility on the OC3D Forums.