ASUS was one of the first manufacturers to master the use of liquid metal thermal interface materials with their ROG series laptops, delivering CPU thermals that are up to 10 degrees cooler than standard thermal compounds.

When comparted to traditional thermal paste, Thermal Grizzly's Conductonaut Extreme TIM can deliver thermals that are up to 15 degrees lower. When compared to ASUS' existing liquid metal formulations, this new thermal compound can deliver CPU temperatures that are up to five degrees cooler. That's an incredible difference given the performance of existing liquid metal TIM formulations. 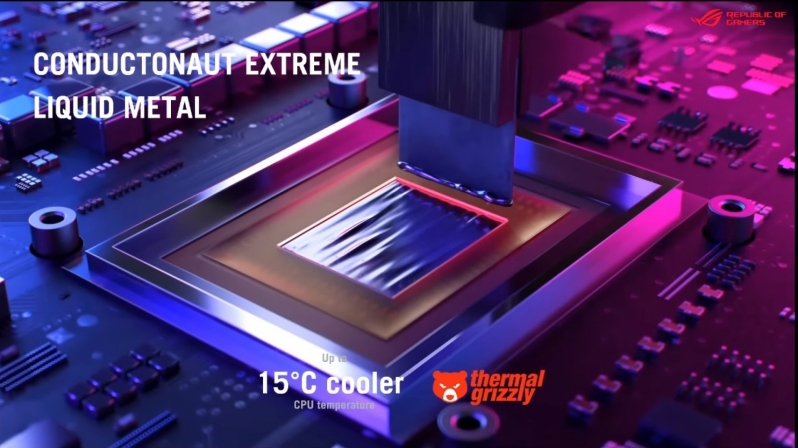 One of the issues that ASUS/Thermal Grizzly's new liquid metal formula is that it is more difficult to apply to processors. This change required ASUS to rework its tooling to apply this new thermal material to its notebooks, enabling improved cooling performance with many of its newly revealed ROG laptops.

ASUS believes that it is far ahead of the competition when it comes to liquid metal utilisation, giving its thermal solutions an edge over its competitors. Liquid metal has already delivered ASUS lower CPU thermals on its ROG laptops, but with their new formulation and tooling, ASUS can deliver even better results. By using their new Liquid Metal TIM, ASUS can make the CPUs in their notebooks cooler and the cooling systems of their latest systems quieter than its competitors. That's a big deal within the laptop market.

You can join the discussion on ASUS' use of an enhanced liquid metal thermal interface material on the OC3D Forums.