Silverstone has announced their new RL06 ATX chassis, which will come in with no optical drive bays and an MSRP of $80 for the standard/base model.
This chassis will be made primarily made from steel and plastic, weighing in at 6KG and coming in both White/black and black/red versions. This chassis will also be coming in both standard and Pro versions, with the basic model coming with a single 120mm fan in the rear and the Pro model coming with three LED illuminated 120mm at the front of the case.
Internally this chassis supports GPUs that are up to 348mm in length and CPU coolers that are up to 158mm tall. This chassis will also support a 240mm radiator at the front and top of the case and PSUs that are up to 200mm in length.
Sadly we have no internal pictures of this chassis, though we do know that this chassis has three 3.5-inch drive bays and two 2.5-inch drive bays, with no 5.25-inch external drive bays for optical drives. 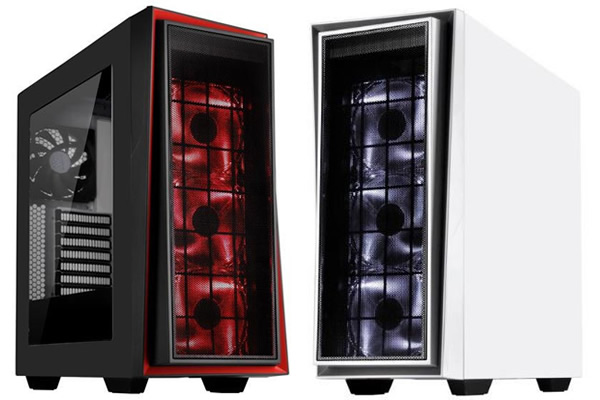 This chassis is expected to launch later this month, with the standard version costing $80 in the US. At this time we do not have a price for the Pro model, though we expect this to be released soon.

You can join the discussion on Silverstone's RL06 ATX chassis on the OC3D Forums.

NickOmega
It's on their website, no actual internal shots but you can see through the window in the side-on shots. It looks ok, but I'm somewhat irked by the lack of rubber grommets for cable routing.Quote


Not going to say I'm sold on the front it looks wrong. like it was an after thoughtQuote
Reply