ASUS is quickly filling in the gaps that have prevented PC builders from creating an all-ROG gaming PC, revealing ROG AIO liquid coolers and their ROG Thor power supply during their Computex press conference.

Not everything at Computex is a final product, which means that there are more than a few "prototypes" and "concept" products at the event, one of which is the ROG Strix PC chassis, a PC case design that came about thanks to a collaboration between both ASUS and In Win.

From the outside of the case, we can see that this concept case is designed for up to EATX motherboard designs, with enough space inside for several large water cooling radiators (2x 360mm) and a lot of heavy-duty hardware. We can also see what appears to be an RGB illuminated ROG logo and ROG Strix lettering on the front and inside of the enclosure respectively.

While the case is designed to accommodate heavy hardware and water cooled components, ASUS has built their ROG Strix enclosure with portability in mind, offering users woven carry handles at the top of the case. Each RGB LED in the system is addressable, allowing users to create a fully custom lighting setup that can match your other components from your motherboard to your GPU to external accessories like an Aura compatible gaming mouse or keyboard. 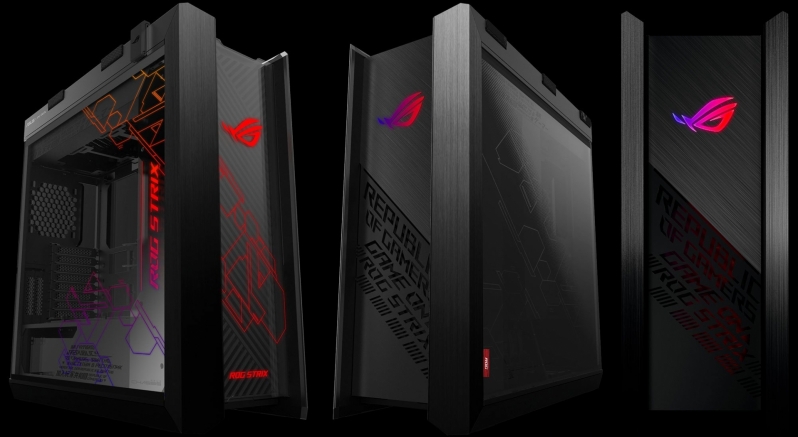 ASUS has also designed this case with a PSU shroud, though it does feature a cutout that can showcase the RGB lighting and OLED display on their latest Thor Platinum series units, allowing ROG fans to showcase their brand loyalty. The enclosure also comes with a vertical GPU mount, which allows PC builders to showcase their graphics card with its cooler being fully visible. 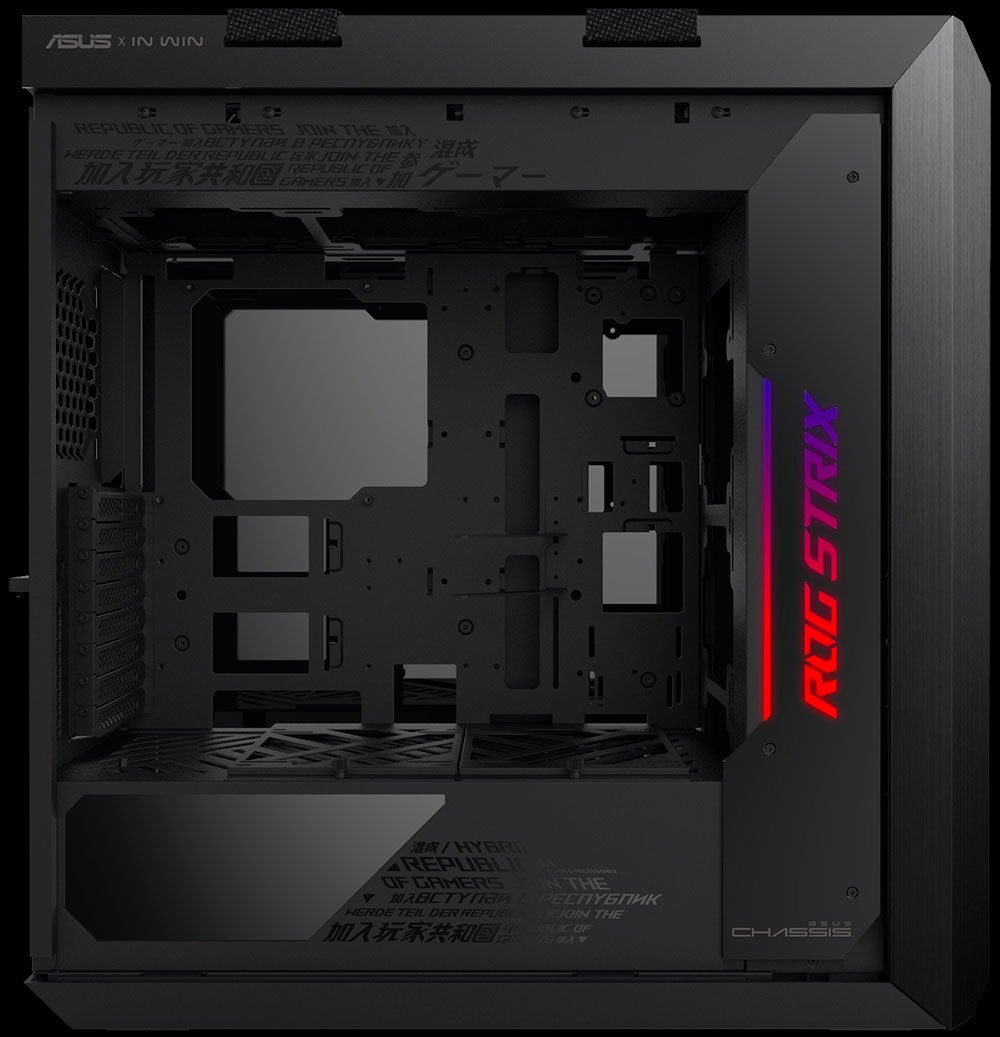 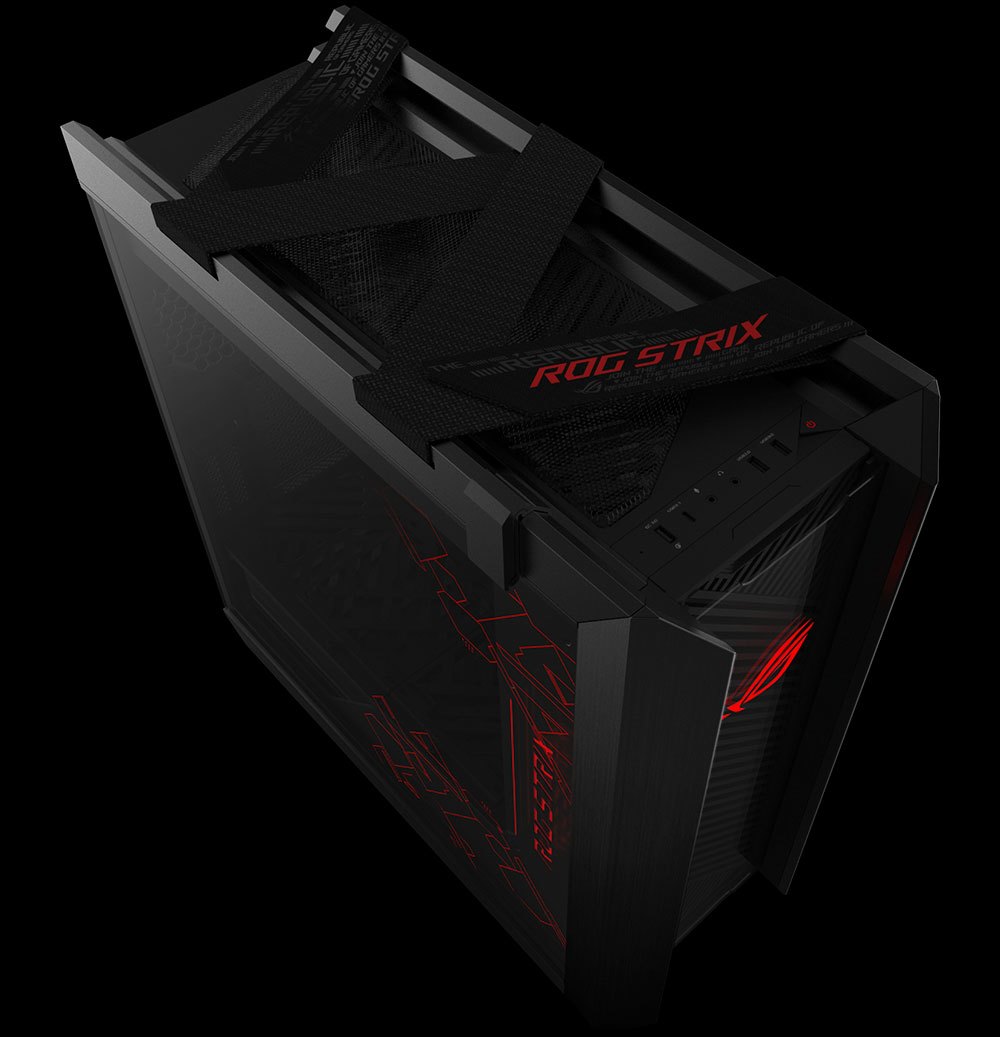 On the case's I/O ASUS are offering support for Quick Charge 3.0 and USB 3.1 Gen 2, allowing for fast device charging and rapid data transfer speeds. ASUS has not revealed the final pricing of this chassis, though we have heard that the case will release in the second half of this year, provided ASUS are able to finalise their design without the need for any significant changes.

You can join the discussion on ASUS' ROG Strix Concept case on the OC3D Forums.

Dicehunter
Close but no cigar, Way too much branding going on, The circuitry design I like but instead of words etched into what I'm assuming is the fan grill at the front, They should have continued the circuit or "Aztec" design and removed the illuminated ROG Strix wording at the bottom.

Same goes for the inside, Get rid of the ROG Strix branding and just have the circuit design continued, The case has a ROG eye on it, No need to over brand something, Makes it seem tacky and cheap.Quote

Bagpuss
Well compared to some of the previously hideous designs they've come out with for their pre-built systems, this is the height of minimal sophistication.Quote

demonking
They just want to be sure we all know Asus is a gaming brand lol
cos they haven't told anyone before...Quote

Bartacus
That front panel is just hideous with all that "gaming" text. Blah, wouldn't touch for free.Quote

Peace Đ
Quote:
I'm with you, but assuming that all pictures are showing the front of the case, it's pretty clear that these are 2 different cases. One with the wording and the other with the circuitry. I like the circuitry more.Quote
Reply