Thermaltake reveals their The Tower 500 Chassis at CES 2022

Thermaltake has expanded its 'The Tower' case lineup

Thermaltake has a new The Tower Chassis, and it will support your EATX motherboards

Meet Thermaltake's The Tower 500, a new mid-tower enclosure that supports motherboards that are up to EATX (12"x13") in size, long graphics cards, and a wide range of liquid cooling components.

Thermaltake describes this new chassis as being "moderate-sized", measuring in at (H)608 x (W)388 x (D)388 mm. The case supports up to eight 120mm fans or six 140mm fans, CPU coolers that are up to 275mm tall, and can support up to a 280mm liquid cooling radiator at the top of the case and up to a 240mm radiator at the bottom of the chassis.

Like other The Tower series cases, The Tower 500 features three 4mm tempered glass windows that give gamers a "panoramic" view of their system's components. The internal space and internal viewpoints offered by this enclosure makes it ideal for showpiece liquid-cooled systems. An example of such a system can be seen below. 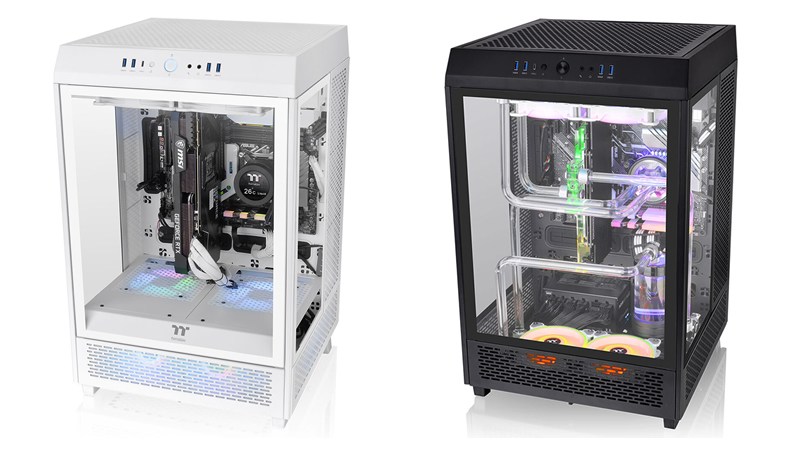 Thermaltake, the leading PC DIY premium brand for Cooling, Gaming Gear, and Enthusiast Memory solutions, is thrilled to bring out The Tower 500 Chassis Black and Snow Editions, the first mid-tower form factor in The Tower series, at the 2022 Thermaltake EXPO January Virtual Exhibition.

Inheriting the well-known vertically-designed appearance beloved by users, The Tower 500 comes in the size of (H)608 x (W)388 x (D)388 mm, which is bigger than The Tower 100 Mini-Tower chassis but smaller than the Tower 900 Supper-Tower chassis. Like other The Tower series models, The Tower 500 provides panoramic viewing by featuring three 4 mm tempered glass windows at the front, left, and right sides. 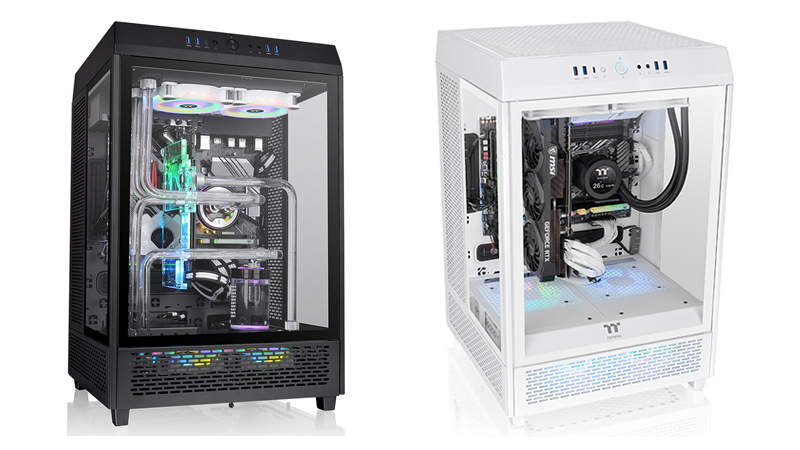 This moderate-size chassis has great hardware expandability which is capable of fitting an E-ATX (12" x 13") motherboard, up to eight 3.5" HDDs, a 355 mm long triple-slot VGA cards; whilst providing a wide-range of opportunities when selecting cooling components, including a 275 mm tall CPU cooler, and up to eight 120 mm or six 140 mm fans. Other than that, both AIO cooling parts and DIY cooling configurations will fit as the interior capacity allows users to place a 280 mm radiator on the top and 240 mm on the bottom. It is also easier for users to figure out how to route the tubes with a water block and radiators on the same side of the chassis thanks to its spacious interior design. All your powerful and gorgeous components will be well-presented through its panoramic view.

The Tower 500 Mid-Tower Chassis is expected to be available for purchase in Q2 2022. For all PC enthusiasts, especially those who love The Tower product line, please stay tuned on the first Mid-Tower of the series!

You can join the discussion on Thermaltake's The Tower 500 Chassis on the OC3D Forums.