Like most modern heatsink designs, Thermaltake's TOUGHAIR series supports all mainstream Intel and AMD sockets, such as LGA 1200, LGA 1150 and AM4. Leger sockets like Intel's LGA 2066 and AMD's TR4 sockets are unsupported, with Thermaltake recommending their liquid coolers for more power-hungry processors.

Starting with the $35 (USD) TOUGHAIR 110, the smallest product in the TOUGHAIR product line, Thermaltake has confirmed that this heatsink will support CPUs with TDPs of up to 140 watts and that the heatsink's lower profile design will allow the cooler to fit into smaller enclosures than their larger TOUGHAIR models.

Thermaltake's three TOUGHAIR coolers will be available at retailers in early February 2021. We expect the UK and European prices for these heatsinks to be revealed soon.

Powered by optimized high static pressure fans that have the same design concept as the TOUGHFAN 12 fans, the TOUGHAIR CPU Air Cooler’s fans are equipped with an advanced Gen.2 hydraulic bearing, LCP fan blades, and a new anti-vibration mounting system to offer outstanding reliability and serenity to any gaming build regardless of the cooling solution.

The TOUGHAIR CPU Air Cooler and TOUGHFAN Turbo High Static Pressure Radiator Fan have a two-year warranty and are supported by the Thermaltake worldwide customer service and technical support network. TOUGHFAN Turbo is now available for purchase via Thermaltake worldwide network of authorized retailers and distributors. TOUGHAIR CPU Air Cooler will be available in early February 2021. 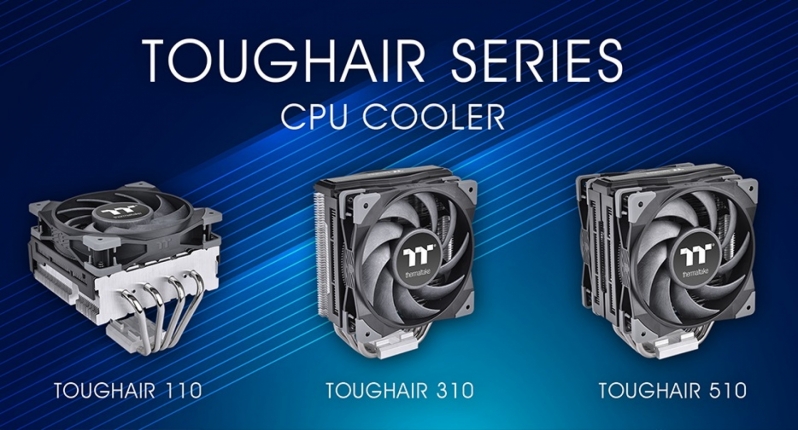 You can join the discussion on Thermaltake's TOUGHAIR series of CPU coolers on the OC3D Forums.