Should Intel be worried? 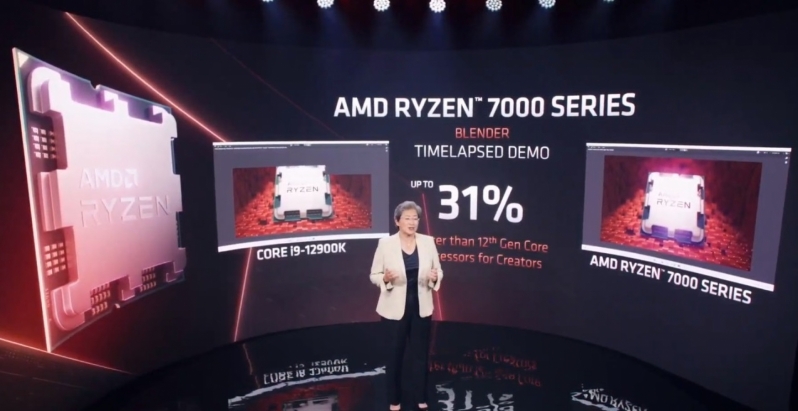 With their Zen 4 core architecture, AMD promised a greater than 15% gain in single-threaded performance when compared to the company's Zen 3 processors. This data point compares AMD;s Ryzen 9 5950X with their 16-core Zen 4 Pre-Production Ryzen 7000 series CPU with DDR5 memory in Cinebench R23's single-threaded benchmark. While this does not seem overly impressive, it is worth remembering that this is a single data point that discusses a workload where AMD already delivers strong performance. Don't consider this as a promise regarding IPC or anything like that. Beyond that, AMD promises a greater than 15% performance increase in single-threaded workloads.

With their Blender benchmark results, AMD has clearly showcased the potential of their Ryzen 7000 series. AMD's Ryzen 7000 series clearly has a solid position within the CPU market, though it remains to be seen how AMD's next-gen CPUs will compare to their Intel counterparts in other workloads.

Dicehunter
Will be interesting to see how Raptorlake stacks up against Zen 4.Quote

KingNosser
Pretty sure Intels next batch will come close to these, but the days of Intel selling clock speed as the best of the best are over. Thing is good to see competition again they will go back and forth each gen on who is the current best. For gaming thou least for now i think anyone on a modern chip is fine and shouldn't feel the need to switch just yet.Quote

Dicehunter
Quote:
I'll get a 13900K only because current Z690 boards are compatible, My 12900K will go into my HTPC but a complete platform swap would be a little silly, I'm not switching to DDR5 until it actually makes sense to do so.Quote

KingNosser
Yea the prices on ddr5 are not great atm, is why i'm waiting, i'd most likely have gone AM5 if amd hadn't given x370 5k support, much more likely to upgrade in gen 3 or 4 of AM5 now.

The GPU however may get upgraded sooner depending but atm i'm happy but i think I'll at least skip a gen on that first. Hopefully by then it still has some value to help.

Makes sense if your board supports the next chip it'll be a lot of leap frogging each gen now between the two they both have a lot of plans, I'm just going to hold off until towards the end more than i did last time, see how it plays out. Idk if i'd go MSI next time on the board thou while it's been fine they are much slower on updates, thou they did add a 1P2 bios fixing the cpu led light issue on my board that I was able to point out to them but everything else is the same so I don't see the point in switching atm unless they add a whql bios i can live with a tiny red light that i don't see

23RO_UK
Quote:
Agreed Dice, financially (the pricing just now is insane) and performance wise (it's still in it's infancy I feel).Quote
Reply