6GHz is the new target for CPUs - Intel's top-tier Raptor Lake processor reportedly runs at up to 5.8GHz

Will Intel be able to reach 6GHz in a few years time?

Later this year, Intel's planning to release a new generation of desktop processors. This new processor series is called "Raptor Lake", and it will be used to create Intel's 13th Generation of Core processors.

Alder Lake introduced Intel's Hybrid x86 CPU architecture to the masses, and Raptor Lake will double down on these ideas by adding more E-cores to their high-end products. Raptor Lake will ship with up to eight P-cores and sixteen E-cores, doubling its E-Core count over Alder Lake. Raptor Lake's is doubling down on E-cores, and hopes to boost single-threaded performance with architectural tweaks and higher core clock speeds.

A report from @OneRaichu, has claimed that Intel should be able to squeeze an extra 200-300MHz out of Raptor Lake when compared to Intel's i9-12900KS. This would give Intel a single-threaded boost clock speed of 5.8 GHz, which is an insane feat. With Raptor Lake, Intel appears to be approaching 6GHz clock speeds.

With Raptor Lake, Intel has promised enhanced overclocking support and "up to a double diget performance boost". These performance increased will come from Intel's increased E-Core count and improved P-Cores. With Raptor Lake, higher core clock speeds and higher Instructions Per Cycle (IPC) are expected. Both of these factors will increase Intel's single-threaded performance. 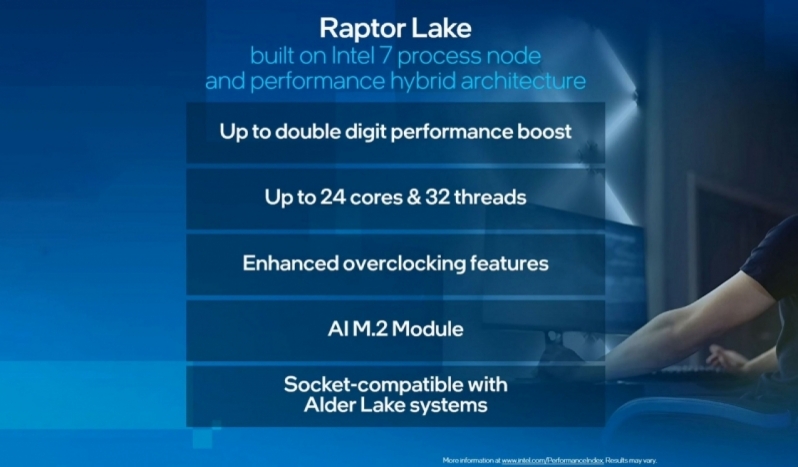 With Raptor Lake, we expect higher levels of single-threaded performance from Intel. As mentioned before, these increased will likely come from an IPC boost due to architectural improvement's and higher core clock speeds.

Later this year, Intel's Raptor Lake processors will be battling against AMD's Ryzen 7000 series. With their Ryzen 7000 series, AMD will be offering users new Zen 4 CPU cores, DDR5 memory support, and other design improvements that stem from AMD's use of TSMC's 5nm lithography node. Large single-threaded performance boosts are expected from Zen 4, both from clock speed enhancements and IPC improvements.

Intel and AMD will be fighting fiercely later this year. It remains to be seen which manufacturer will come out on top. All we know is that it's going to be an interesting battle.

You can join the discussion on Intel's Raptor Lake processors reportedly running at up to 5.8 GHz on the OC3D Forums.

NeverBackDown
Let them get it. Will still make no sense as it'll consume double the power than AMDs flagship. That alone makes it a no go for me.Quote

Dark NighT
Yep total waste of effort, i'd rather see a way better IPC and lower clocks to get to this level of performance instead of just brute forcing high clocks to beat past the competition.Quote

AlienALX
Quote:
Firstly they are not brute forcing the clocks. You can't force something to do what it is not capable of doing. As for doing it to get past the competition? don't you remember the AMD Centurion? even at 5ghz it was balls.

The big thing is whether it actually helps. Like, will IPC improve per clock. I would imagine so, given they are instructions per clock, but whether it will be worth the power consumption remains to be seen.

I can absolutely bet you now that if AMD could clock their chips to those speeds they would, power consumption be damned. Mostly because they did it before.

Like I said, the scaling remains to be seen. However, if this was just pump? then AMD would have nothing with the big Navi GPUs. Fact is that clock speed does help to make them really fast.

I mean really if anything we should be expecting higher clocks. We've reached parity on cores now and we're no longer being screwed by a monopoly so clock speeds is the next logical step, given that they are what has lagged behind most due to die shrinks.Quote


There will always be some people who, planet be damned, will buy the absolute best they can because they have the money.


Let them, they're helping to fund further developments. A bit like motor racing. Eventually new technology trickles down to mid-range guys like me at prices I like.Quote
Reply