Is this AMD's 'Dragon Range' CPU?

AMD's next-gen Ryzen 9 7845HX mobile processor has been spotted, giving us a glimpse of Zen 4 on mobile platforms

A new AMD processor has appeared on the Ashes of the Singularity Benchmark website, showcasing an unreleased AMD processor called the Ryzen 9 7845HX, a 12-core mobile processor that features 12 cores and 24 threads.

This new processor from AMD appears to be a Zen 4 based mobile processor that could be based on the same silicon as AMD's Ryzen 9 7900X. Like the CPU below, it also features a Radeon graphics component and the same core count as this new mobile SKU. For AMD, the Ryzen 9 7845HX represents a huge generational leap for AMD, as their current Ryzen mobile CPU models have a maximum core count of eight.

If AMD is repurposing desktop silicon for their new Ryzen mobile processors, it is possible that AMD also plans to release a 16-core Ryzen Mobile processor. This could be AMD's rumoured Ryzen 9 7945HX processor, though this has not been confirmed.

AMD has confirmed that they plan to release "Dragon Range" mobile processors in 2023. These CPUs will feature Zen 4 CPU cores, the "highest ever cores, thread, and cache ever for a mobile gaming CPU" and fast creator/productivity performance. 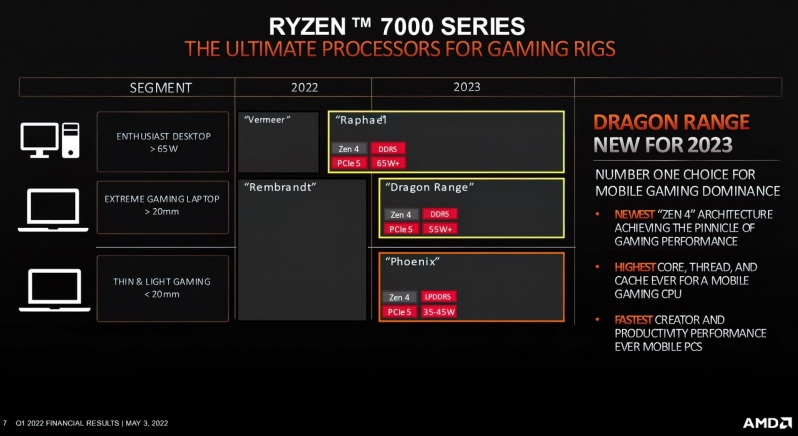 We expect to hear more about AMD's Ryzen 7000 series "Dragon Range" CPUs at CES 2023. This is where we expect AMD to reveal their plans for next-generation AMD-powered laptops.

You can join the discussion on AMD's Ryzen 7000 series mobile processors on the OC3D Forums.