A next-generation Zen 4 Ryzen CPU has been spotted with a 5.2GHz clock speed

An AMD Ryzen 7000 series engineering sample has been spotted over on the OpenBenchmarking website(via @Petkemano), somebody has tested AMD's next-generation Zen 4 processors using the Phoronix Test Suite, completing various tests with the new processor. This benchmark listing revealed a lot of new details about AMD's Zen 4 "Raphael" series processors.

For starters, the CPU in question was an 8-core model that had sixteen threads and featured a 5.21 GHz clock speed. This clock speed is likely to be the CPU's boost clock speed, though it is worth remembering that AMD showcased a Zen 4 CPU at CES where "All of those Zen 4 cores are running at 5 GHz".

So what does these leaks tell us? It tells us that AMD's Ryzen 7000 processors will offer users much higher core clock speeds, as no Zen 3 processor can boost above 5GHz, and that AMD's Zen 4 Ryzen processors will feature integrated graphics silicon, a first for AMD's high-end performance-oriented Ryzen series CPUs. 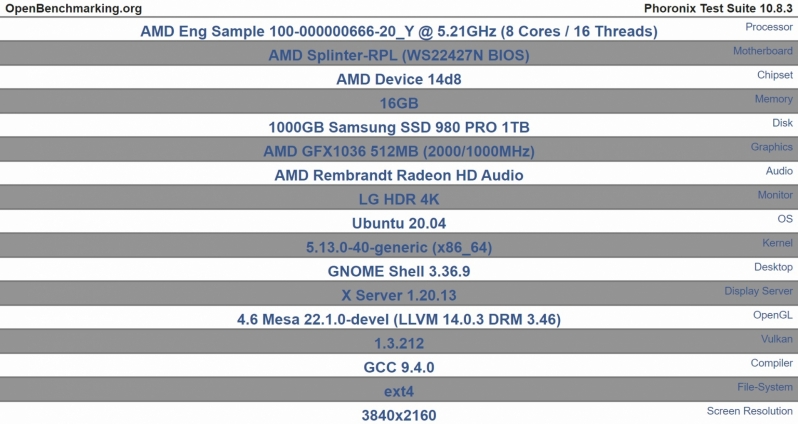 AMD plans to host their Computex 2022 keynote on May 23rd at 7am UK time. Here, we expect AMD to release more information about their next-generation Ryzen 7000 series processors, CPUs that will be based on the company's Zen 4 architecture and use the company's new AM5 CPU platform.

At CES, AMD showcased a Ryzen 7000 series CPU running at 5GHz on all cores. It is likely that AMD will give us a taster of Zen 4's performance at Computex, as AMD is expected to launch their Ryzen 7000 series later this year, around September/October 2022.

You can join the discussion on AMD's latest Ryzen 7000 leaks on the OC3D Forums.