In response to a Tweet from CapFrameX, Yuri Bubliy (@1usmus), the creator of the Ryzen DRAM calculator, the Hydra overclocking utility, and ClockTuner for Ryzen (CTR), stated that AMD's upcoming AGESA 1207 microcode will "bring performance gains" to AMD's Ryzen 5800X3D processor.

AMD's Ryzen 7 5800X3D is a processor that specifically targets gaming workloads, as the processor's enlarged L3 cache can only increase the performance of AMD's Zen 3 CPU cores in workloads that are memory/cache heavy. If a workload does not benefit from having more data on cache, the Ryzen 7 5800X3D will not offer gamers more performance than AMD's existing Ryzen 7 5800X. 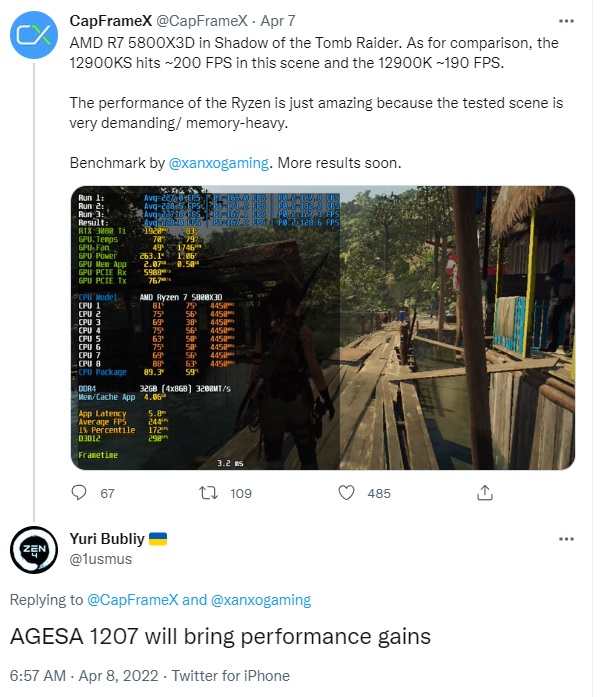 AMD's AGESA 1207 AGESA microcode will be available within new BIOS releases for AM4 series motherboards later this month. Those who purchase AMD's Ryzen 7 5800X3D processor should make sure that their motherboards are updated to utilise the full potential of AMD's V-Cache enhanced processor.

You can join the discussion on AMD's AGESA 1207 microcode enhancing their Ryzen 7 5800X3D's performance on the OC3D Forums.

Good thing is as soon as I get my grubby mitts on the Bios I am ready to press the order button on the CPU, i've decided it'll be either one of two cpu's 5700x or a 5900x I just want to be certain first and know it'll work in the board but with the prices not being a huge gap apart i'd really like to get a 5900x it's overkill for sure but it'll last that little longer.

Sure am looking forward to it thou XD

Not so sure 5900x or 5950x will be supported on x370 looking at the original press release seems only the newest and lower tier cpu's are getting that in the bios update, it'll still be a big upgrade thou

My eyes are on the 5800x3d reviews whip tom mush faster as i'm seeing intresting numbers on that one atm.Quote
Reply