Is AMD sandbagging us?

Should we expect Zen 4 to be better than claimed?

When AMD showcased their Ryzen 7000 series processors at Computex, a lot of hardcore PC enthusiasts were unimpressed. AMD's claims of a "^15% single-threaded uplift" seemingly implied that the majority of Zen 4's performance gains would come from clock speed enhancements and not IPC gains, leaving many Ryzen fans concerned that AMD could struggle against Intel's next-generation CPU offerings.

In a recent interview with TechPowerUp, AMD's Robert Hallock stated that AMD was being "deliberately conservative" with their single-threaded performance numbers at Computex. Beyond that, Hallock confirmed that AMD would be discussing the "exact breakdown of IPC vs frequency contribution" of Zen 4's performance gains this summer.

At Computex, you showed a 15% single-thread performance gain over the Ryzen 9 5950X. Wouldn't that only put the gaming performance on par with 5800X3D?

I think it's too early to say actually. We were deliberately conservative with our number on single-thread performance. We do intend to publish the exact breakdown of IPC vs. frequency contribution later in the summer, also including performance, power, and area on the new process. As far as what stacks up against what, I think it's too early to say, we're still in silicon bring-up.

To make a long story short, we need to see a lot more data before we start making any major performance claims regarding AMD's Ryzen 7000 series processors and AMD's Zen 4 CPU architecture. 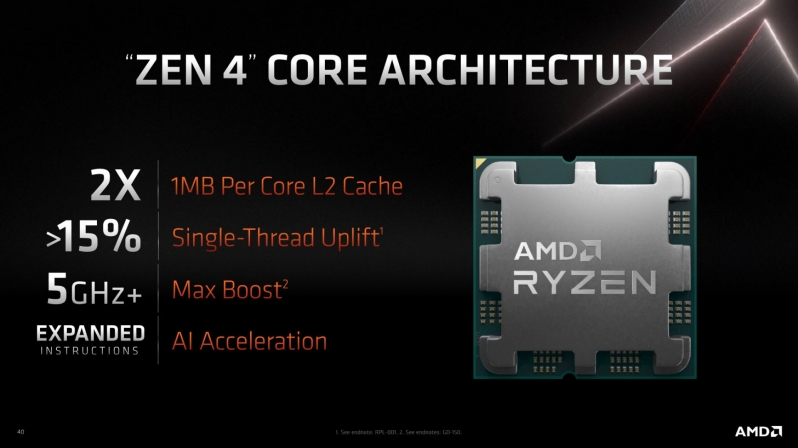 When discussing CPU overclocking, AMD's Robert Hallock stated that "5.5GHz was very easy for us", and commented elsewhere that their 5.5GHz clock speed demo was using a early Ryzen 7000 series CPU without applying an overclock or using an overly exotic cooling setup. This CPU was cooled using a 280mm AIO liquid cooler, not a water chiller.

What can we expect from the processors in terms of CPU overclocking?

I'm not gonna make a commitment yet on frequency, but what I will say is that 5.5 GHz was very easy for us. The Ghostwire demo was one of many games that achieved that frequency on an early-silicon prototype 16-core part with an off-the-shelf liquid cooler. We're very excited about the frequency capabilities of Zen 4 on 5 nanometer; it's looking really good, more to come.

Should we expect more from Zen 4?

Assuming that AMD is not lying to us when they say that their Zen 4 performance claims from Computex were "conservative", then we should assume that AMD has some more impressive performance gains to show us later this year. That said, it remains to be seen how well Zen 4 will perform in critical workloads like gaming and content creation, or how the addition of AVX-512 instructions will improve AMD's performance in today's workloads. AMD still has a lot to show us with Zen 4.

You can join the discussion on AMD's Ryzen 7000 series performance claims on the OC3D Forums.

ET3D
"Wouldn't that only put the gaming performance on par with 5800X3D?" is kind of a silly question, really. The 5800X3D has lower single-threaded (and multithreaded) performance than a 5800X, yet smokes it in games. Obviously that's not a very good measure of gaming performance.

In this interview Robert Hallock also said that with Zen 3 Cinebench only went up 8-10% in IPC, but the average IPC increase over a larger number of software packages was 19-20%.

All in all, we can't conclude much from this figure.Quote

ET3D
Hmmm... My text "In this interview", which linked to a video, got the video embedded. Which is not very intuitive, but I guess it's not that bad.Quote

Dawelio
Quote:
Wouldn't be a shock if they did, but would be if they did so without being a nuclear reactor in terms of cooling