The SATA-IO website has been updated with a new filing that lists AMD's new Ryzen Threadripper PRO 59X5 WX Series of desktop processors. This listing has confirmed AMD's plans to release a next-generation series of Threadripper processors, what's likely to be a Zen 3 update for AMD's Ryzen 3000 Threadripper PRO CPU lineup.

SATA-IO's listing confirms nothing about AMD's Ryzen Threadripper 59X5 WX-Series processors outside its planned naming scheme and the fact that it supports the SATA 6 Gbps and SATA 3 Gbps interfaces. That said, we can make a few educated guesses based on a few factors.

For starters, AMD's use of a Ryzen 5000 series naming scheme suggests that AMD's new Threadripper PRO series CPUs will be based on the company's Zen 3 core architecture and support the same WXR80 motherboards as AMD's Ryzen Threadripper PRO 3000 series CPUs. If this is true, these processors will support 8-channel DDR4 memory and feature up to 64 CPU cores. 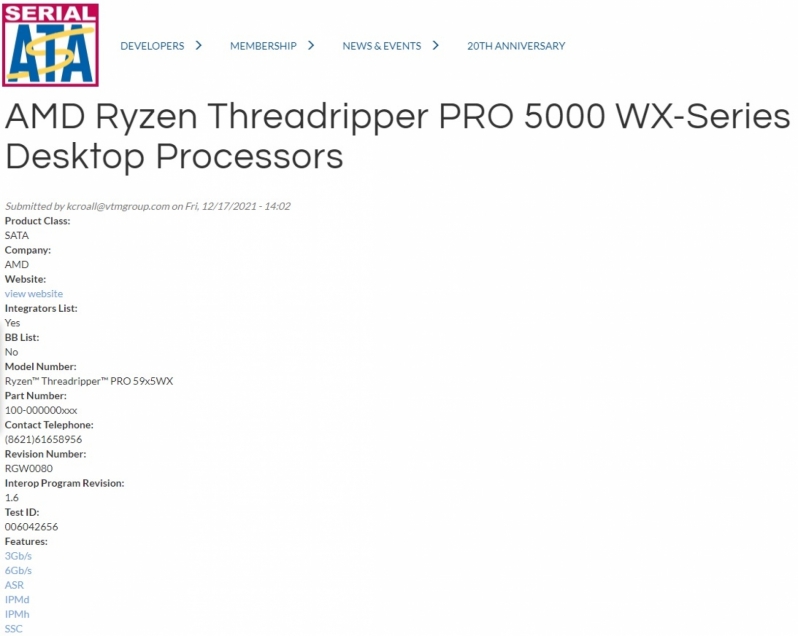 Recent rumours have suggested that AMD plans to launch their Ryzen Threadripper PRO 5000 series of desktop processors on March 8th, with a product reveal at CES 2022.

According to Videocardz, AMD plans to reveal five Threadripper PRO series processors. Recent rumours have suggested that there will be 12-core, 16-core, 24-core, 32-core, and 64-core models. At this time, the exact specifications of these processors are unknown.

You can join the discussion on AMD's Threadripper PRO 5000 WX series processors on the OC3D Forums.