AMD confirms that its AM5 socket will be "long-lived platform", just like AM4

Good news, AMD's new AM5 socket has been designed to be a "long-lived platform"

AMD's launching a new motherboard platform at the end of 2022, a platform that will act as the new baseline for AMD's Ryzen CPU lineup. With AM5, AMD will be moving to DDR5 memory, PCIe 5.0 connectivity and to an LGA1718 socket, enabling the next generation of AMD's Ryzen desktop product line.

AM5 is the successor of AMD's AM4 socket, with AM4 spanning from AMD's original Ryzen 1000 series to today's Ryzen 5000 series processors. AM4 was a long-lived CPU socket, and AM5 is due to be another long-lived CPU platform from AMD. As AMD's Lisa Su stated in a recent interview (from a now deleted article from PC World), "you should expect that AM5 will be a long-lived platform as AM4 has been."

PC builders should expect AMD's AM5 socket to support multiple CPU generations from AMD, starting with AMD's Ryzen 7000 series of Zen 4 processors. With AM5, AMD is ditching DDR4 memory, because in the long term, it is not in AMD's best interest to support both DDR5 and DDR4 long term. If AM5 is to be a long-lived socket, it cannot be shackled to DDR4 memory.

AM5 is designed to act as a new baseline for AMD's Ryzen product line, setting PCIe 5.0 and DDR5 memory as baseline aspects of the company's newest product lines. The move to an LGA socket gives AMD the pin density that they need to support the latest I/O and connectivity technologies, allowing AM5 to be a platform that can support long-term development.

Paul Alcorn (Tom's Hardware) - AMD committed to the AM4 platform, the AM4 socket for quite a long time. Can you guys give us any idea of how long you will stick with AM5?

Lisa Su (AMD's CEO) - Well, we've been extremely pleased with how AM4 has evolved….we said we would keep that socket for a long time and we have. We continue to believe that it has been good for the community and frankly, it's been good for us as well. As we bring things along, it was time to do a socket transition for the new I/O in the new technology, but I think strategy-wise, it should be similar. I don't have an exact number of years but I would say that you should expect that AM5 will be a long-lived platform as AM4 has been. I think we're expecting AM4 to stay in the marketplace for quite some years and it will be sort of an overlapping type of thing 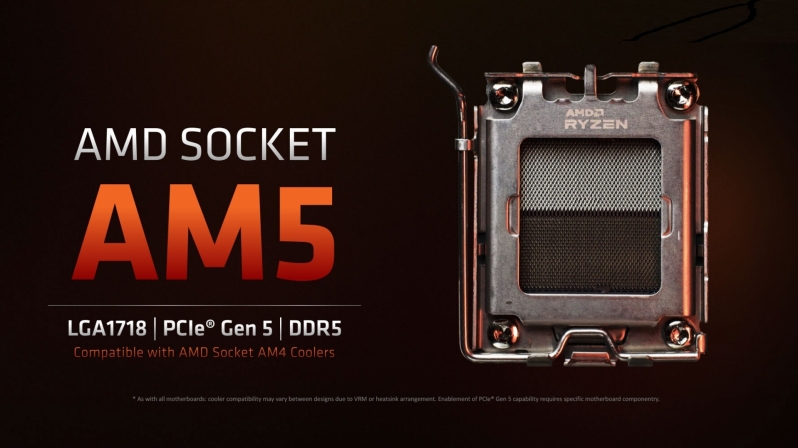 The move to AM5 will be a major transition for AMD, and it will coincide with a major architectural and lithography shift. AMD's AM5 platform and Ryzen 7000 series promise to deliver users Zen 4 cores and 5nm transistors, both of which have the potential to dramatically increase AMD's system performance. Add on DDR5 memory and PCIe 5.0 connectivity, and AM5 has the potential to be a breakthrough platform for AMD.

While AMD has not announced a specific lifespan, AMD is expected to last for at least three product generations from AMD. That said, AMD's long-term plans will be defined by what technology becomes available and how the needs of consumers shift. If these changes dictate the move to a new socket design and platform, AMD will move. That said, it will take years for such a change to be considered worthwhile.

You can join the discussion on AMD's AM5 platform being "long-lived" on the OC3D Forums.

Greenback
Though having the option to just upgrade the cpu is nice at some point you still need a new MB to get the newer features, wonder if they'll put extra large Bio's chips in the AM5 boardsQuote
Reply