AMD confirms that PCIe 4.0 will not be available on older 300/400-series AM4 motherboards

'The potential for confusion is too high' - Robert Hallock

AMD confirms that PCIe 4.0 will not be available on older 300/400-series AM4 motherboards

AMD's upcoming 'Matisse' series of Zen 2 processors will be the first consumer-grade CPUs to deliver support for PCIe 4.0 to the masses, enabling other manufacturers to create faster M.2 NVMe storage devices, or otherwise, develop products that can take advantage of the standard's 2x increase in bandwidth over PCIe 3.0.

Technically speaking, older AM4 motherboards could support PCIe 4.0, assuming that motherboards meet the PCIe signalling requirements of the standard. While AMD's 'Matisse' series processors will be backwards compatible with AMD's X470/B450 and X370/B350 series of motherboards, PCIe 4.0 support will not be added to these older platforms.

This is a safe position for AMD to take, as it lays down some guarantees for consumers. Now, owners of existing AM4 motherboards should not expect BIOS updates that enable PCIe 4.0 support when using AMD's latest processors, rather than sit with their fingers crossed with a vague hope that their motherboard may be one of the few to offer limited PCIe 4.0 support.

If AMD allowed their older motherboards to support PCIe 4.0, they ran the risk of getting blamed for any and all PCIe 4.0 related issues on their older motherboard designs. Signalling issues would result in data corruption, instability and other issues, problems which AMD would prefer to avoid. While some customers will call this move a mistake, it must be remembered that running any piece of technology outside of its original specifications is always inherently risky. 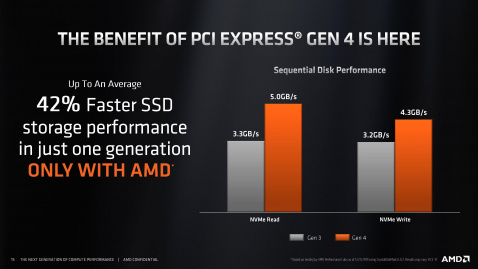 You can join the discussion on AMD preventing older AM4 motherboards from supporting PCIe 4.0 on the OC3D Forums.

Piskeante
did they really have to say this? Wasn't it obvious??Quote
Reply