AMD confirms that their mainstream B650 AM5 chipset will support overclocking

When AMD revealed their B650, X670, and X670E AM5 motherboard chipsets, AMD's marketing slides stated that their X670 chipset was for "enthusiast overclocking", leaving many to assume that AMD's lower-end B650 chipset would not support overclocking. Thankfully, this is not the case.

AMD has officially confirmed that their B650 chipset will support overclocking, which is great news for mainstream Ryzen 7000 series CPU owners. Overclocking will not be restricted to AMD's higher-end chipsets, allowing budget-oriented PC builders to unlock the potential of their AM5 processors.

While overclocking will be supported on B650, AMD's mainstream AM5 chipset will have its downsides when compared to X670 and X670E. PCIe 5.0 support will be restricted exclusively to storage, with motherboards likely supporting only a single PCIe 5.0 M.2 slot. Your motherboard's primary PCIe 16x slot will be limited to PCIe 4.0 data rates, which could limit the potential of future PCIe 5.0 compatible graphics cards. That said, PCIe 4.0 speeds is plenty fast for most modern use cases over a 16x PCIe slot. 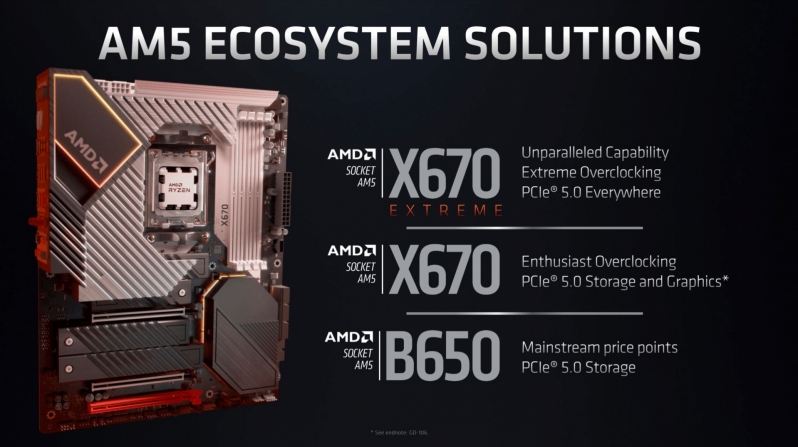 So no, AMD are not downgrading their B650 chipset by removing support for overclocking. AMD is committed to allowing its users to overclock their processors on their mainstream AM5 chipset. That said, X670 and X670E motherboards will be built with overclocking headroom in mind, and will likely feature beefier VRM heatsinks, more power phases and other overclocking-oriented design features. There's a reason why AMD says that X670 is designed for "enthusiast overclocking".

You can join the discussion on AMD's confirmation that their B650 chipset will support overclocking on the OC3D Forums.

I just hope that the overclocking bit is meaningful, and not a total waste of time like it has been since Ryzen came out.

I suppose it depends on how much they have to push it, given Intel catching them up.Quote

Dawelio
Quote:
I wouldn't hold my breath here, I think the days of overclocking are like SLI. They are gone. Not many people overclock their systems these days, mostly just enthusiasts. Especially given that Ryzen etc are basically at their limits out of the box.Quote

demonking
Quote:
I agree with you here, but more like GPU overclocking. Pre- boosting you'd have a set speed, i.e 3.4ghz. put any old cooler on it in any old case with next to no cooling, you'd be running at 3.4 and getting 4.2 would be easy with a good cooler, I ran a 3770 at 4.2 for nearly 7 years on a £65 scythe cooler

Now keeping any kind of clocks is reliant on good cooling, I mean 230 watts is a mental amount of heat to deal with on a processor! 10 years ago being able to pump enough power into a cpu to generate that sort of heat was extreme overclocking, huge open loops or sub zero.

Overclockings not what it was. it was for the nerds that wanted to spend a little extra money and lots of time, its the other way round now. You can spend hours now and get maybe a few points. Then some kids mum buys him the top board, sticks on auto and is just behind your 4 hour investment.Quote

AngryGoldfish
Quote:
In fairness, a 3770K is a very different CPU than current architectures. Obviously we don't want to go back to those days because processors are now lightyears ahead.

If AMD and Intel deliberately held back performance by limiting TDP and kept the price the same, we'd all be praising them for being great overclockers. But because AMD and Intel are doing that work for us, they're criticised.Quote
Reply