Q1 2021 has proven to be another record-breaking quarter for AMD, smashing through the company's 3.2 billion earnings expectations by almost 8%. Every part of AMD has seen positive revenue growth over the past quarter, with AMD seeing rising Ryzen, Radeon and EPYC sales.

In Q1 2021, AMD has earned $3.45 billion. This represents a 93% revenue growth over Q1 2020 and a 6% growth quarter-over-quarter. Q1 is usually a slow quarter for semiconductor companies, but today's AMD is firing on all cylinders and is selling practically every piece of silicon it can produce.

AMD is supply constrained, making the company's manufacturing capabilities the only limit on the company's growth. AMD has reported record ASPs (Average Sales Prices) and gross margins of 46%, a 1% increase over the last quarter. In contrast, Intel has reported a sharp decline in ASPs within the laptop and desktop market, signalling that AMD's growth has hit Intel hard.

All of AMD's products are in high demand, be it their desktop CPUs, their graphics cards, their enterprise solutions or their semi-custom console chips. The only limit on AMD's growth appears to be its manufacturing capabilities, and that is why AMD has increased their full-year 2021 earnings growth prediction from 37% to 50%. 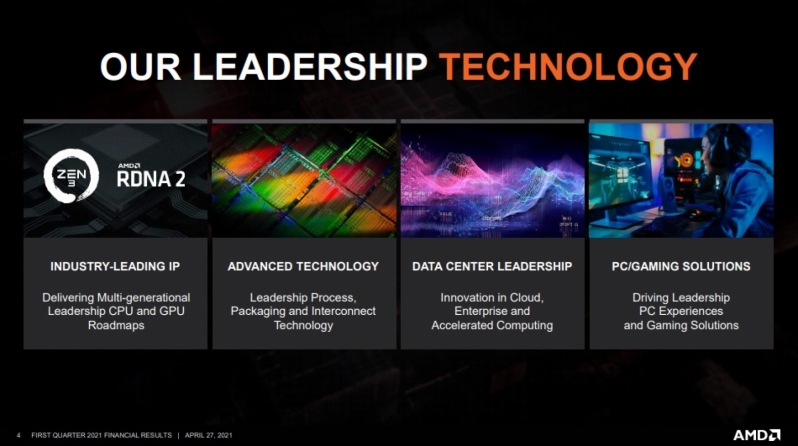 In Q2 2021, AMD expects its GPU supplies to increase next quarter, confirming that they have already doubled their Radeon RX 6000 series sales quarter-over-quarter. Even so, graphics card demand remains higher than ever, and it remains to be seen whether or not AMD's supply increase will be enough to meet the market's demand for RDNA 2 GPUs.

AMD has reported strong sales for their Ryzen, Radeon and EPYC product lines, highlighting growth within all areas of the company. Last quarter, AMD's net income increased by over 243% when compared to the prior year. All-in-all, AMD has reported a flawless Q1. 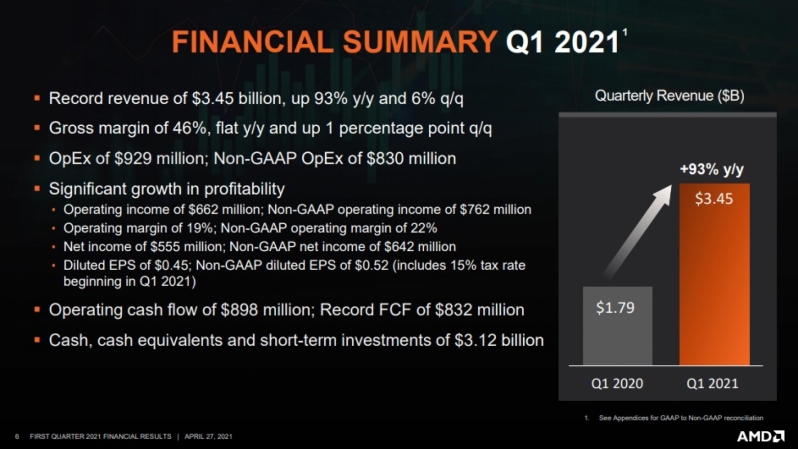 In Q2 2021, AMD now expects to earn $3.6 billion, an expected quarter-over-quarter revenue increase of 150 million over Q1. AMD expects to continue seeing strong sales across all areas of the company, with their growth being limited by their manufacturing capabilities and not the competitiveness of their products.

In Q1, AMD's strongest growth has been seen within the company's Enterprise, Embedded, and Semi-Custom segment, which has seen tremendous growth over the past quarter thanks to the launch of AMD's 3rd Generation EPYC Milan platform, and the continued success of AMD-powered consoles like the PlayStation 5, Xbox Series X and Xbox Series S.

Today, AMD now has $3.1 billion in the bank and $313 million in debt. AMD's now in a strong financial position, a staggering turnaround given the company's finances five years ago. Back then, AMD was at risk of going bankrupt, and now, AMD's finances have never been stronger. 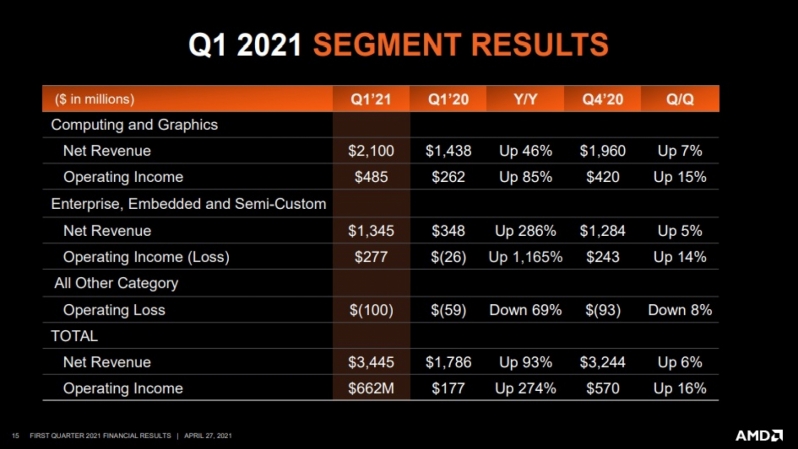 There are many reasons to have a positive outlook for AMD, especially when the company still has several Radeon RX 6000 series graphics cards to launch, new Zen 3 offerings in the form of Threadripper 4th Gen and continued sales from the company's existing product lines. 2021 will be a big year for AMD, especially if the company can continue to increase their manufacturing capacity. 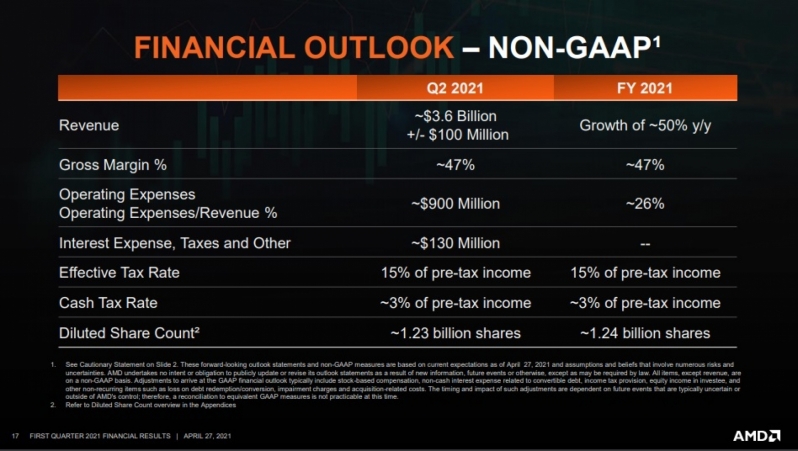 You can join the discussion on AMD's record-breaking Q1 performance on the OC3D Forums.