The better way to overclock

With their Ryzen 5000 series of Zen 3 processors, AMD wants to make overclocking great again, offering users more options to tinker with, more variables to tweak and the ability to make their CPUs both faster and more power-efficient. This is the future of overclocking, and AMD calls this future Precision Boost 2.

Traditional overclocking is dead, offering hardware enthusiasts increasingly minor performance improvements in many workloads while often coming with huge increases to both power consumption and cooling requirements. Rather than use the traditional 'higher volts=higher clocks' approach to overclocking, AMD has enhanced its Precision Boost Overdrive system to deliver undervolting for Zen 3, an adaptive voltage curve that's processor-specific and the possibility of single-threaded performance boosts. 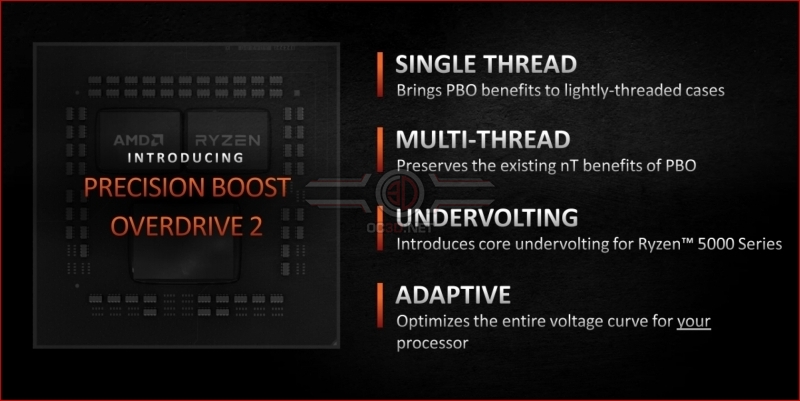 AMD's original Precision Boost technology was designed to enable higher power limits on AMD's Ryzen processors. This allowed Ryzen users to deliver higher sustained clock speeds and all-core boost clocks. In many cases, single-threaded clock speeds did not improve, but that is due to change with precision Boost 2.

We are no longer talking about overclocks where fixed voltages are used and a single clock speed is targetted. AMD's Precision Boost 2.0 targets the entire voltage/frequency curve, enabling both performance and efficiency gains. 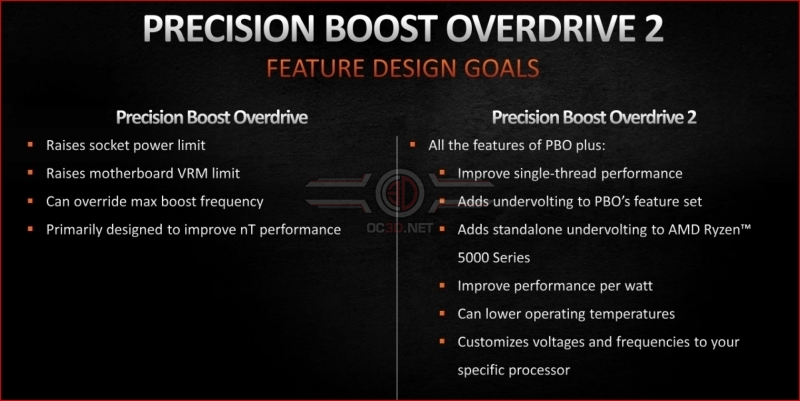 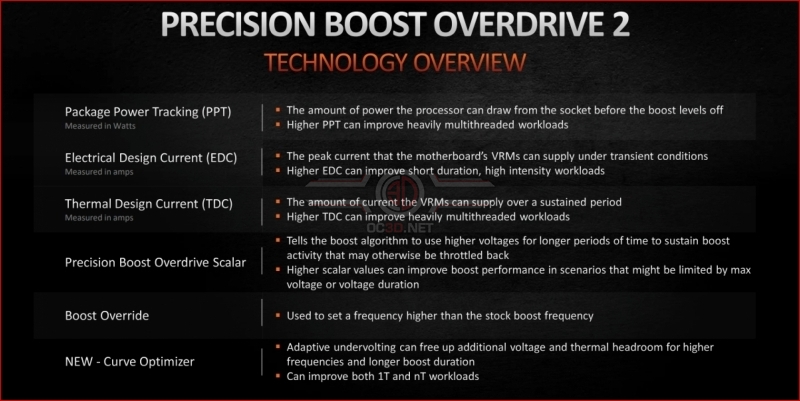 Like traditional overclocking, no two Ryzen 5000 processors will deliver the same results. As always, the Silicon Lottery always applies. Some CPUs will feature more undervolting headroom, while others will offer higher maximum boost clocks.

Using AMD's Curve Optimiser, users can define the operating conditions of their processors, giving them a deeper level of control over their Ryzen processor than ever before. 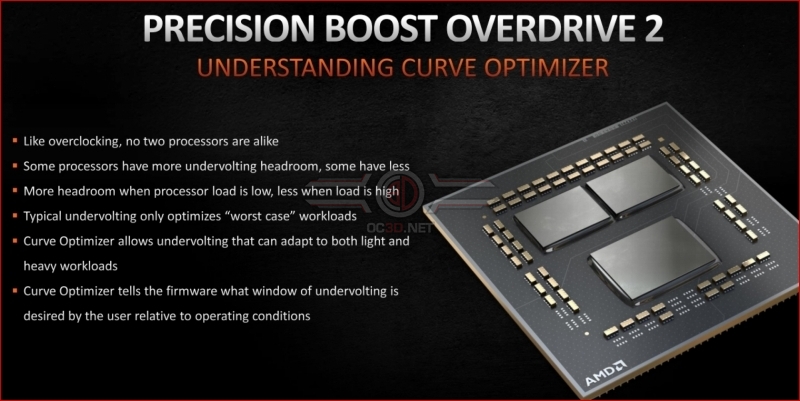 Below is an illustration of how two processors can vary, with one offering higher frequencies at lower voltages. 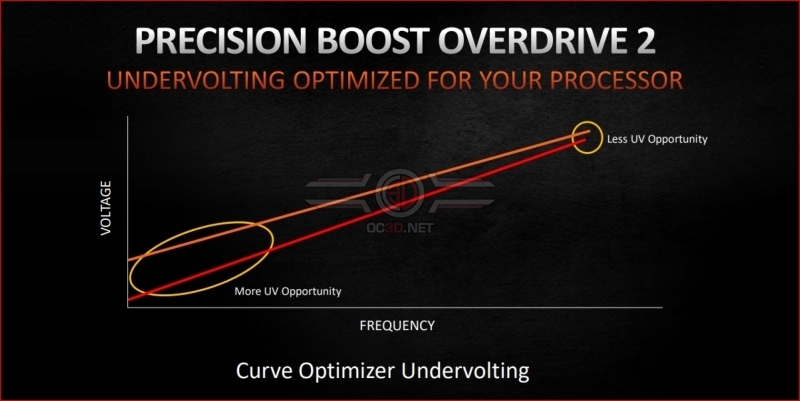 AMD's Curve Optimiser can be used on single cores or on all cores within a CCX (CPU die), giving tweakers as much fine-grained control as they could ask for. 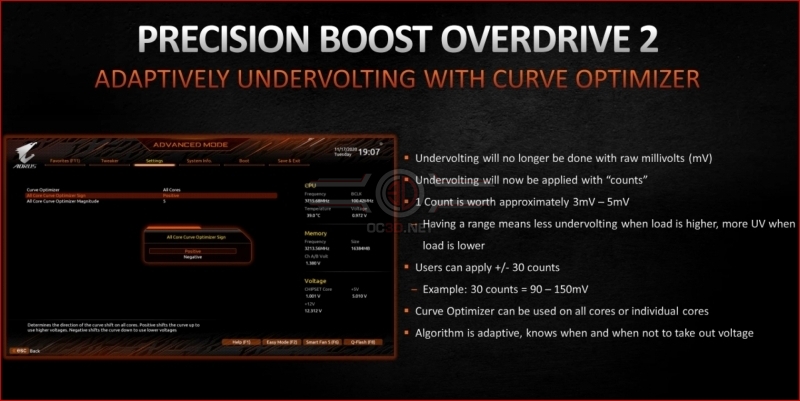 Below are some suggested settings from AMD, though ideal settings will be dependent on your exact processor and hardware configuration. 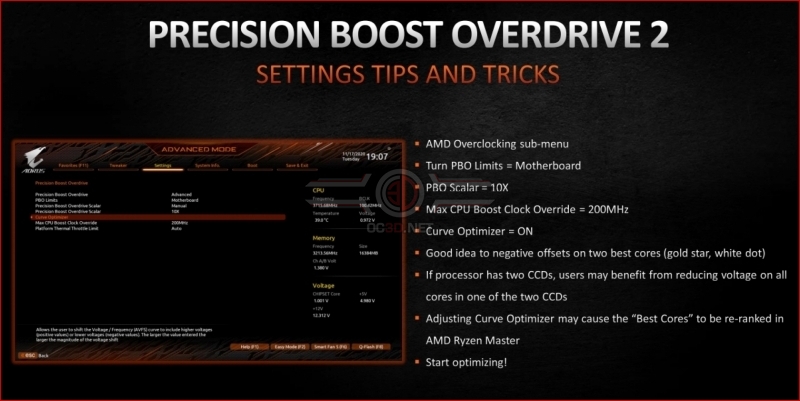 In terms of single-threaded performance, AMD delivered 16 point and 12 point improvements in Cinebench R20 respectively, surpassing what was possible with their original Precision boost tools. 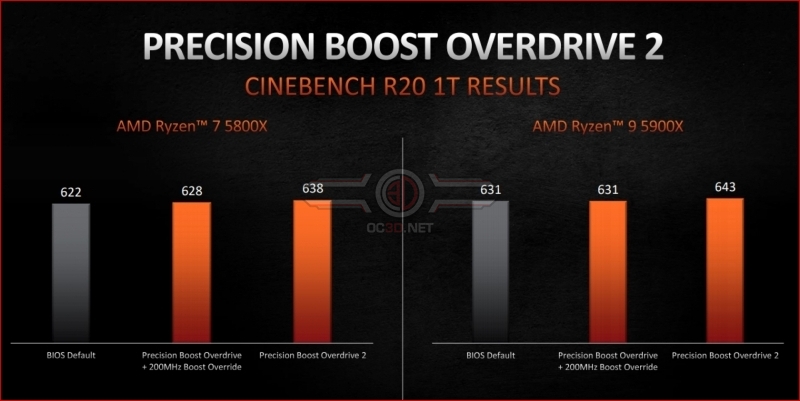 Precision Boost Overdrive 2's performance impact is even more impressive when looking at multi-threaded results, allowing AMD's Ryzen 9 5900X to achieve a score of over 9000 in Cinebench R20. 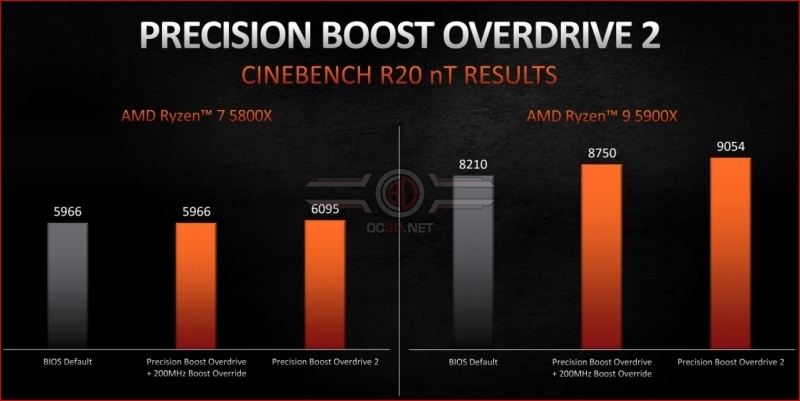 Precision Boost Overdrive 2 will be possible on Ryzen 5000 series desktop processors on AMD 400-seres and 500-series motherboards with AGESA 1.1.8.0 BIOS files. These new BIOS files are due to release this December. 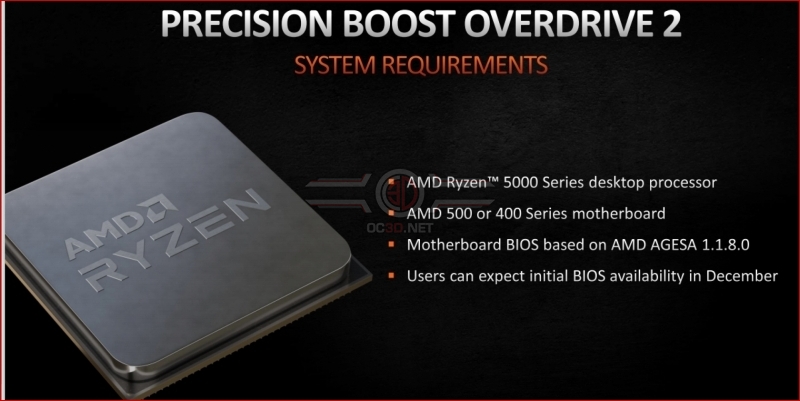 You can join the discussion on AMD's Precision Boost Overdrive 2 technology on the OC3D Forums. 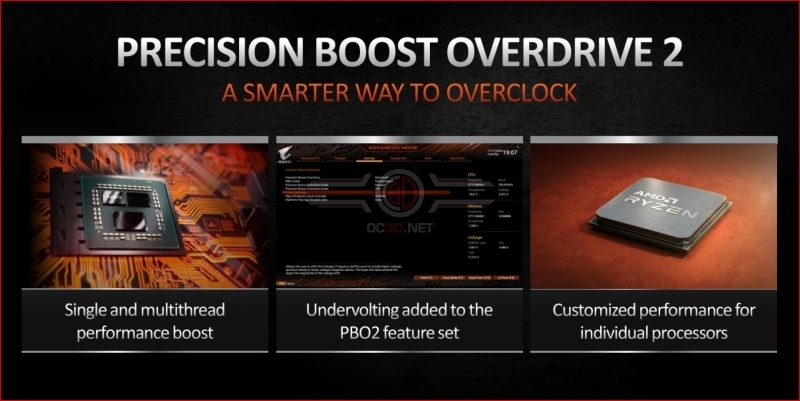 Very excited to see the real-world performance numbers of PB2. I wonder will it mean AMD beats Intel in gaming absolutely. In some tests I've seen, Intel's best chips still have a 1-2% lead.Quote

looz
I doubt it has a large effect on gaming, but production loads seem to benefit a fair bit potentially.Quote

WYP
Quote:
Quote:
If the Cinebench is anything to go by, a 2.5-ish percent gain in ST performance would be a good addition for AMD in gaming when things are so tight. That said, I'd imagine that having the right memory would have more of an impact.Quote
Reply