Here's what to expect from Zen 4

AMD has revealed a lot of new information about Zen 4 at their Financial Analyst Day. We have already talked about AMD's CPU roadmap (here), but that was not the only thing that AMD discussed with regards to their CPUs.

With Zen 4, AMD has now promised an 8-10% IPC improvement over Zen 3, and a greater than 15% single-threaded performance gain over Zen 3. Heightened IPC will allow AMD to deliver more performance per clock cycle, and increased clock speeds will allow AMD's Zen 4 cores to complete more clock cycles per second. Together, these changes will deliver significant performance increases across a variety of applications.

At Computex, AMD showcased a desktop Ryzen 7000 series Zen 4 processor that had 16 CPU cores running at 5+ GHz and peak frequencies of above 5.5GHz. That's a huge frequency gain over today's Zen 3 CPU models. 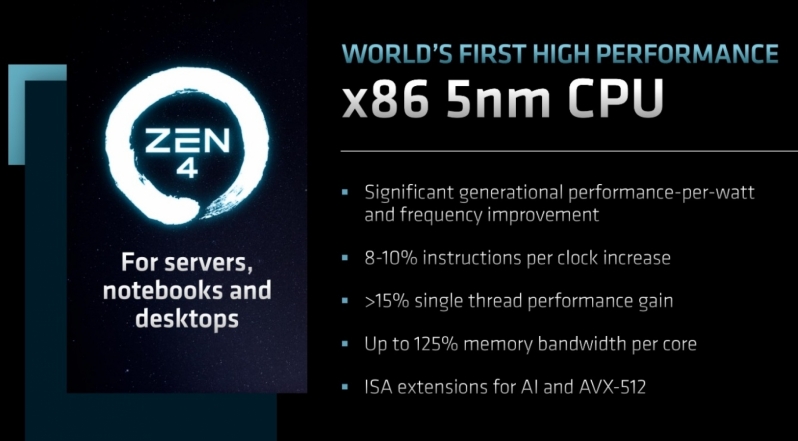 The slide below showcases how AMD's Zen 4 16-core desktop CPU can deliver more than 25% performance per watt gains over an equivalent Zen 3 processor, and a 35% increase in overall performance. In short, AMD's Zen 4 desktop processors will deliver higher efficiency levels than Zen 3, and higher wattages for premium products will result in larger performance gains in all-core workloads. 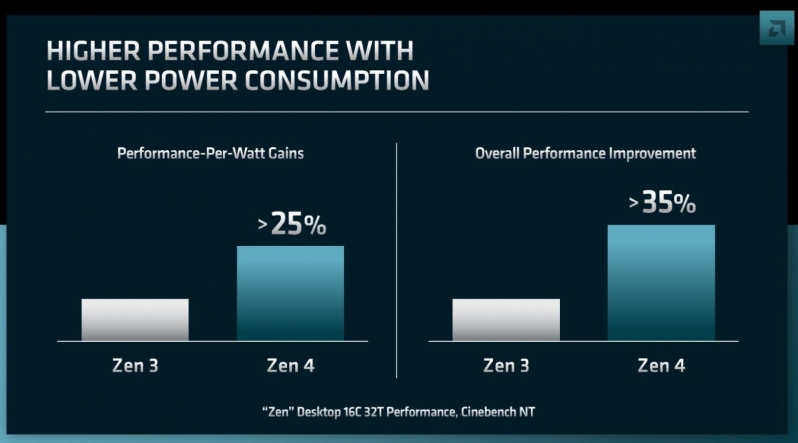 AMD has confirmed that Zen 5 is coming in 2024, promising higher levels of performance and power efficiency than Zen 4, a re-pipelined front end and wider issue. Alongside these changes, AMD will be integrating new AI and machine learning optimisations.

Sadly, AMD has not revealed a lot of useful information about Zen 5. Increased efficiency and performance are expected changes for Zen 5, but it is good to know that we should expect Zen 5 to launch in 2024. AMD's desktop Zen 5 processors should be compatible with AMD's upcoming AM5 motherboards, giving Zen 4 users a clear upgrade path in 2025. 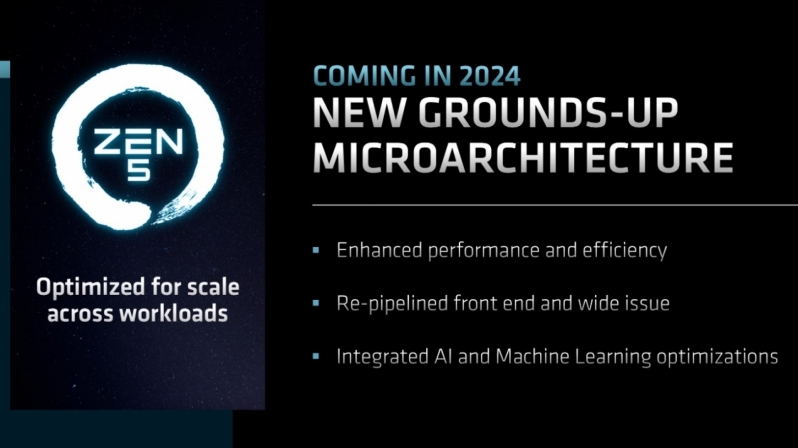 You can join the discussion on AMD's new Zen 4 details and Zen 5 plans on the OC3D Forums.

NeverBackDown
Not as impressive when you realize they are comparing to non V-Cahce CPUs. I'd like to see those comparisons included next time from them.

Still I'd like to upgrade to Zen 4. Just gotta wait for ddr5 ro finally be reasonable

AngryGoldfish
Yeah, AMD is facing a lot tighter competition now. Alder Lake is faster in IPC in many workloads than Zen 3 (not gaming when compared to 5800X3D), and Zen 4 might only match it or slightly beat it. Intel then will release Raptor Lake and retake that crown. I'm still very impressed by Zen 4 though.Quote
Reply