AMD ends 2020 with record revenues and a strong growth outlook

AMD ends 2020 with record revenues and a healthy growth outlook

AMD has just released its Q4 2020 and full-year 2020 earnings report, revealing substantial revenues and an impressive growth outlook for 2021. AMD has posted record-high gains for 2020, earning $9.76 billion in revenue while also increasing their gross margins. 2020 was AMD's most profitable year to date, and 2021 is set to be even better for the company.

In Q4 2020, AMD earned $3.24 billion in revenue, a 53% revenue growth year-over-year (YoY) and a 16% revenue growth quarter-over-quarter (QoQ). This growth comes thanks to strong semi-custom sales, growing sales for Ryzen, EPYC and Radeon products. In Q4 2020, all of AMD's major businesses experienced sales growth, thanks to the launch of their Zen 3 desktop processors, RDNA 2 graphics cards, and new AMD-powered consoles (like the Xbox Series X, Xbox Series S and PlayStation 5). 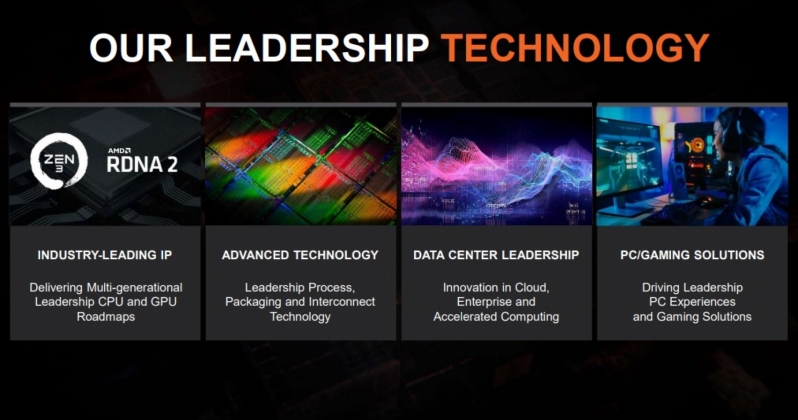 In Q4 2020, AMD saw its client processor average sales prices (ASPs) get lower thanks to growing Ryzen Mobile CPU sales, with client ASPs increasing thanks to the success of the company's Ryzen desktop CPUs. Radeon product ASPs also grew, thanks to AMD's re-entry into the high-end graphics market with the Radeon RX 6000 series.

AMD's largest success was seen in their Enterprise, Embedded and Semi-Custom group, which saw a revenue increase of 176% YoY thanks to growing EPYC sales and the launch of AMD-powered next-generation consoles from Microsoft and Sony. 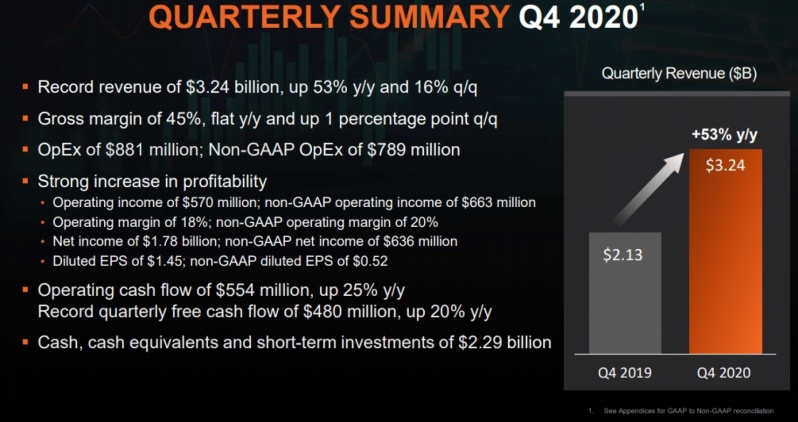 As a whole, 2020 was a huge success for AMD, seeing AMD's gross margins increase for eh 5th year in a row and a staggering 45% revenue growth when compared to 2019. AMD has also increased its operating cash flow and free cash flow, allowing the company to more freely spend money whenever it needs to. AMD has also decreased its debt by over 30% throughout 2020.

AMD has also set itself up for a strong 2021 with the launch of its Ryzen 5000 series of mobile processors at CES 2021. AMD has also demonstrated strong enterprise performance with their 3rd generation EPYC processors. 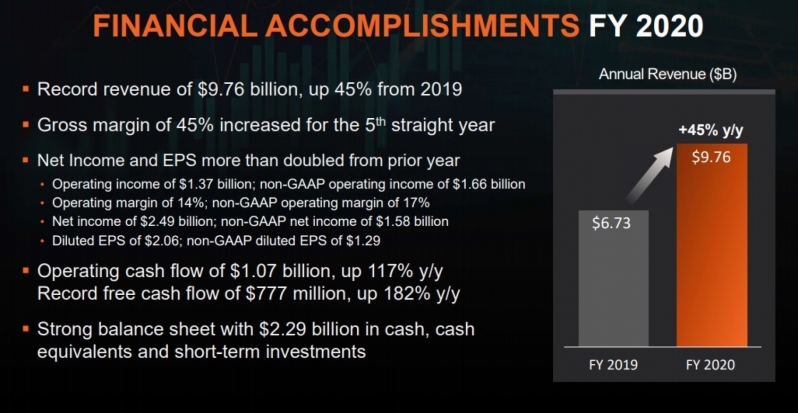 In 2021, AMD expects its gross margins to increase by two percentage points to 47% and the company's revenues to grow by approximately 37% year-over-year. If this prediction proves to be accurate, AMD will earn over $13 billion in 2021. While this would be a huge increase for AMD, it is worth noting that Intel's 2020 revenues were $77.87 billion, making AMD a small fry by comparison. AMD may be on an upward trajectory, but they are far from being the new Intel.

You can join the discussion on AMD's 2020 earnings on the OC3D Forums.