AMD gave Intel every advantage they could, but maintained performance parity

When AMD showcased their Ryzen 3rd Generation processor lineup at E3, the company revealed slides which shown performance parity with Intel in several popular titles. Now, it has been confirmed that AMD's testing methodology wasn't designed to get the best out of their processors. The opposite was true, AMD tested Intel's processors with every advantage they could, even when it came at the cost of their own system performance, at least according to Paul's Hardware.

For starters, AMD tested Intel's CPUs without software and firmware mitigations for the latest speculative execution vulnerabilities/security flaws that impact their processors. Doing so prevented these security fixes from reducing the performance of Intel's processors, giving their rivals a performance boost over an equivalent, secured system.

AMD also tested both sets of processors on an older version of Windows 10, which hampered their own potential performance. The latest version of Windows 10, which arrived with Microsoft's May 2019 update, delivered scheduler changes which enable the OS to utilise AMD's Ryzen series processors better. This version of the OS isn't widely used yet, so AMD opted to use the same version of the OS as their Intel-based test system, hampering their own performance in the process. More information on these OS changes is available here.

This testing methodology is designed to match those of reviewers who will opt to give Intel platform their best performance, even if it comes at the cost of platform security. Regardless, even with these shortcomings, AMD's Ryzen 3rd Generation processors offer exceptional levels of performance, even when placed against Intel's performance optimised platforms. 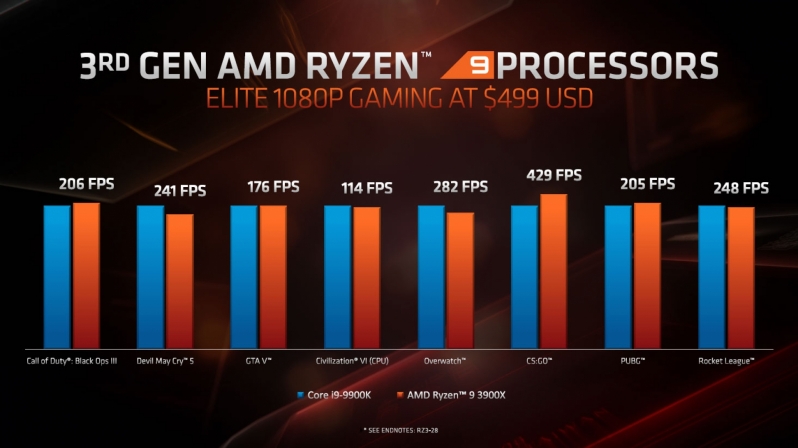 You can join the discussion on AMD giving Intel an advantage in their internal Ryzen 3rd Gen gaming tests on the OC3D Forums.