AMD have revealed their new Wraith CPU Stock Cooler, a CPU heatsink which is both cooler and quieter than AMD's current stock CPU cooler designs.

This cooler is bigger than their previous design and features a larger fan, which runs at a much lower speed and provides a higher static pressure in order to keep this heatsink much cooler than it's older generation counterpart.

This heatsink is expected to be bundles with high end CPUs and APUs from AMD's Bristol Ridge and Zen ranges of CPUs, giving AMD users a much better stock cooler experience before they more to larger aftermarket coolers for overclocking. 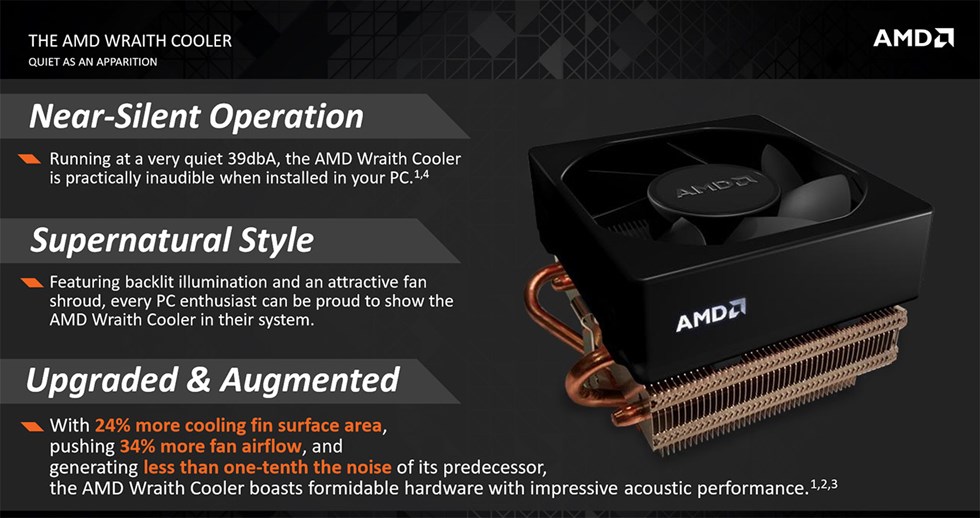 Sadly during AMD's acoustic testing they did not provide a scale by which to measure the difference between the sound produced by each cooler, but it is clear to hear how much quieter AMD's new reference cooler is.

While most of us PC builders tend to throw stock coolers on the bin as soon as we can get our hands on an aftermarket heatsink, there is still a very large number of users who are either budget constrained or are otherwise stuck with using a stock CPU cooler, so it is great to see that AMD has worked hard to improve their reference/stock CPU cooler design.

Let's hope that this change in CPU cooler design has not been prompted by how hot their new Zen CPU cores run as we certainly do not want another Volcano CPU from AMD, especially given how cool Intel CPUs run these days.

You can join the discussion on AMD's new Wraith CPU cooler design on the OC3D Forums.

Feronix
Poor Wraith, now all newbies are going to think he named himself after an AMD cooler

AlienALX
I'd be honored if they named a cooler after me. Unfortunately **** probably wouldn't be appropriate. (C word)Quote