AMD Q2 performance proves they are now a High-End company

AMD can no longer be called the PC market's underdog

AMD Q2 performance proves they are now a High-End company

AMD has released their Q2 2021 earnings report, continuing the story of the company's explosive growth and rising profit margins. With boosted revenue and rising margins, it is now clear that AMD is a high-end PC company. The days of AMD as an underdog are over.

Right now, the only thing that's limiting AMD's potential growth is the global chip shortage. Even so, AMD has managed to exceed its growth expectations and grown its margins by a higher than expected amount. Compared to Q2 2020, AMD has increased its Q2 revenue by 99% in 2021, which, when accompanied by rising margins, more than doubles its profitability. AMD generated $3.85 billion in revenue this quarter, easily surpassing their $3.6 billion revenue expectations.

AMD's gross margins have risen to 48%, representing a 2% increase over Q1 2021 and a 4% increase over Q2 2020. These gains are due to increased high-end Ryzen sales, stronger Radeon sales, and rising EPYC market penetration.

Today's AMD is firing on all cylinders and is selling practically every piece of silicon it can produce. AMD is supply constrained, making the company's manufacturing capabilities the only limit on the company's growth. That said, this is not stopping AMD from increasing its full-year 2021 growth expectations from 50% to 60%.

At the start of 2021, AMD predicted that its full-year 2021 revenues would be 37% higher than its 2020 revenues. Now, AMD is predicting 60% revenue growth. A lot has changed over the past six months, and it will be interesting to see if AMD's growth predictions will rise again at the end of Q3. 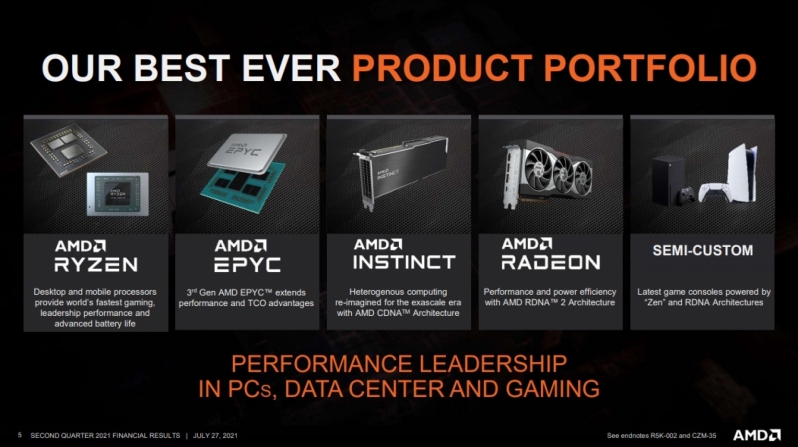 Currently, AMD expects its Q3 2021 revenue to be $4.1 billion, expecting growth in all areas of its business. Quarter-over-quarter revenue gains are expected to be primarily driven by AMD's data centre and gaming businesses, which means that AMD expects strong sales growth from its Radeon and EPYC product lines. AMD's Gross Margin is expected to remain at 48% in Q3. 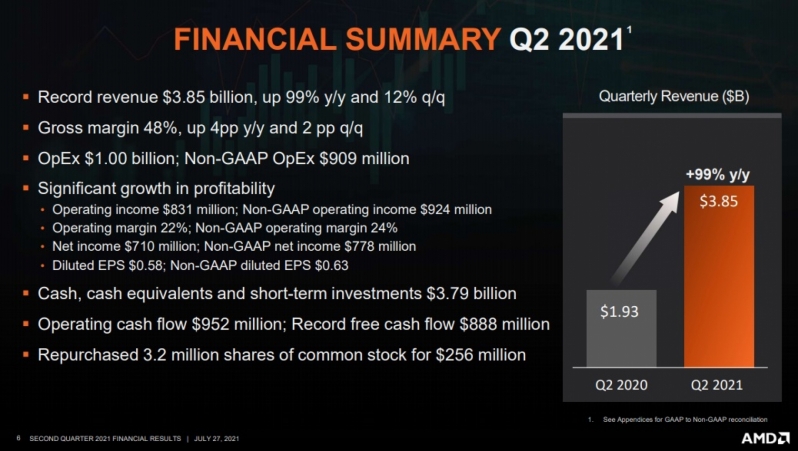 During H1 2021, AMD's strongest growth has been seen within the company's Enterprise, Embedded, and Semi-Custom segment, which has seen tremendous growth over the past quarter thanks to the launch of AMD's 3rd Generation EPYC Milan platform, and the continued success of AMD-powered consoles like the PlayStation 5, Xbox Series X and Xbox Series S.

AMD's now in a strong financial position, a staggering turnaround given the company's finances five years ago. Back then, AMD was at risk of going bankrupt, and now, AMD's finances have never been stronger. Today, AMD now has almost $3.8 billion in the bank and $313 million in debt. 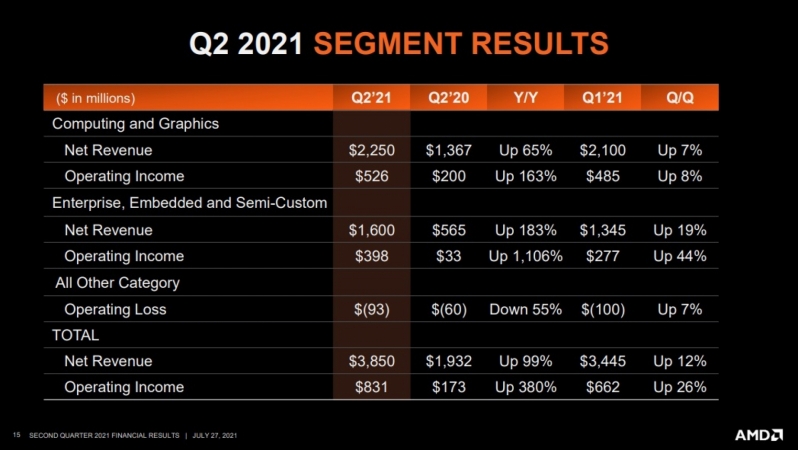 AMD's acquisition of Xilinx is expected to be approved by the end of 2021, a move that should cement further growth over the coming years. Things are looking good for AMD, and that outlook isn't going to change anytime soon. 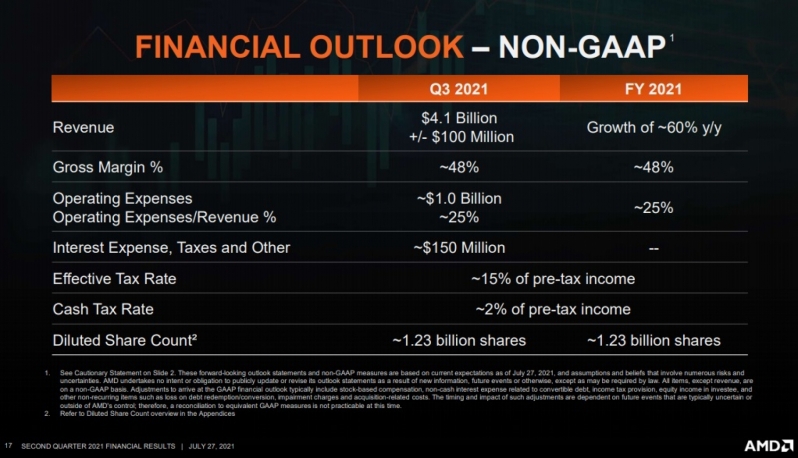 You can join the discussion on AMD's record-breaking Q2 performance on the OC3D Forums.