With Generation 4 EPYC, AMD will be diversifying their CPU lineup, delivering optimised CPUs for general purpose computing, cloud computing, technical computing and telecommunications work. All of these processors will be based on AMD's Zen 4 architecture, with each design offering custom tweaks to deliver higher performance levels, higher efficiency levels, or lower pricing to the customers that need it.

For most users, Genoa will be an great option for AMD's customers, but AMD knows that they can deliver better products for selected markets by optimising their Zen 4 architecture for specific workloads. That's where Genoa-X, Bergamo, and Siena come into play. 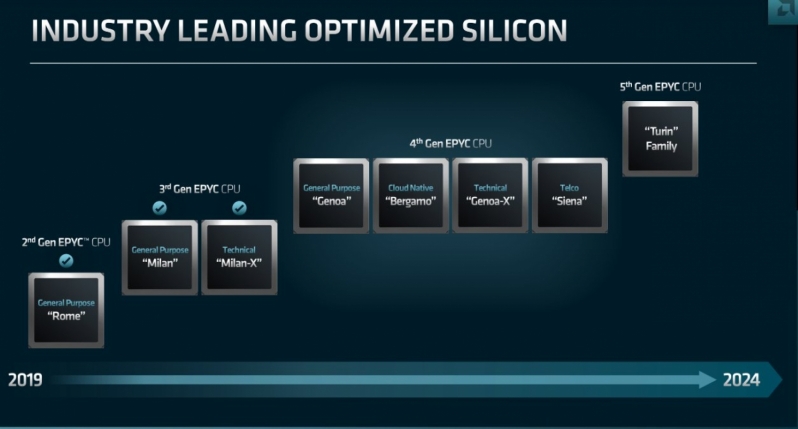 Genoa-X is just like Milan-X, upgrading AMD's baseline EPYC processors with 3D V-Cache to offer customers more L3 Cache to accelerate technical computing and database workloads. Like Genoa, Genoa-X will offer AMD's customers up to 96 CPU cores per socket, and thanks to V-Cache, Genoa-X will offer users more than 1GB of L3 cache per socket.

AMD has stated that their existing Milan-X customers are already interested in upgrading to Genoa-X, as AMD's promise of higher core counts, zen 4 enhancements, more L3 cache, and DDR5 memory support should all help to accelerate their workloads further. Milan-X has already proven to he a huge hit within AMD's target markets, and Genoa-X aims to build upon this success.

Siena is a newly announced product line from AMD, offering users up to 64 Zen 4 CPU cores on a "lower cost platform" that is designed to deliver users "optimised performance-per-watt". With Sienna, lowered TCO (Total Cost of Ownership) is critical, and with this product, AMD hopes to expand into the telecommunications market and intelligent edge market. 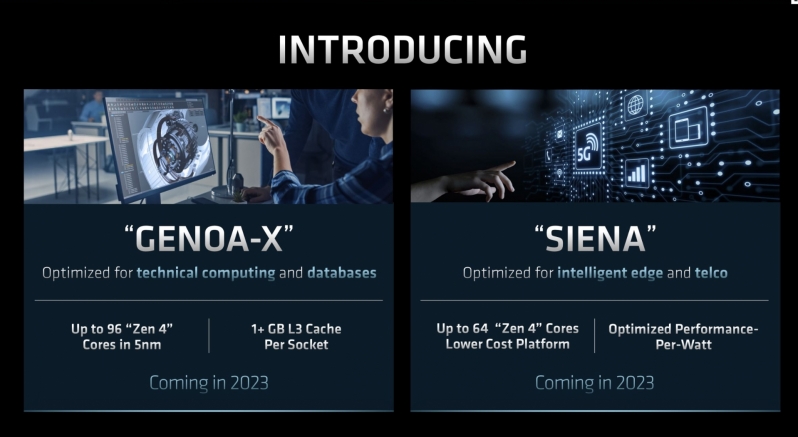 With Bergamo, AMD has tweaked their Zen 4 architecture to create Zen 4c, an optimised Zen 4 core that's designed to be more core dense due to its densified caches. This allows AMD to deliver up to 128 cores per socket with Bergamo, which is a significant increase over what AMD's standard Zen 4 EPYC offerings will deliver.

While Bergamo offers more cores than Genoa, Genoa will be the best EPYC processor for generalised workloads. Bergamo is designed for cloud-native workloads, where core count is king and larger caches have limited benefits. With Bergamo, AMD aims to deliver more performance-per-watt and raw performance to users that need it, allowing AMD to deliver more cost-effective processors to these customers and gain market share within this specific area of the enterprise CPU market

The days of general purpose processors are over. Customers require CPUs that are optimised for their workloads and do not want to pay for features that they cannot use. Genoa exists because not all of AMD's customers would benefit from Genoa-X's enlarged 3D caches, and Bergamo and Siena exist to deliver more performance and more cost effectiveness to specific areas of the server CPU market. Through diversity, AMD can deliver more to their customers, whether it be specific performance tweaks for specific markets, or cutbacks that will make their processors more cost-effective to specific customers.

With Genoa, AMD is delivering to their customers more cores, more memory bandwidth, and faster connectivity though PCIe 5.0. Beyond that, Genoa will support CXL, and other advanced features that Gen 3 EPYC CPUs lack, giving AMD's customers even more features to exploit.

You can join the discussion on AMD's new EPYC CPU roadmap on the OC3D Forums.