AMD's APUs have always held a lot of promise within the gaming market, promising to offer low price tags while delivering compelling performance levels on both the CPU and GPU side.

AMD is the only company that currently offers high-end CPUs and graphics cards, placing the company in a unique position to develop single-chip solutions for the notebook market, products that would be ideal for gamers on a budget and professional users whose workflow would benefit from GPU acceleration.

So far, AMD's Ryzen Mobile APU offerings have been limited to low-TDP silicon, with their Ryzen U-series offering configurable TDPs of 12-25W. While these products are ideal for some users, others would prefer to access higher performance levels, something that is only possible with higher-TDP offerings. This is where AMD's new Ryzen H-series comes in.

Specifications for both AMD's Ryzen 5 2600H and Ryzen 7 2800H have been released on AMD's website, promising TDPs of between 35W and 54W and clock speeds that start from 3.2GHz and 3.3GHz respectively. Both of these APUs also offer support for 3200MHz memory out of the box, an important factor to consider if gamers want to get the most out of AMD's iGPU. 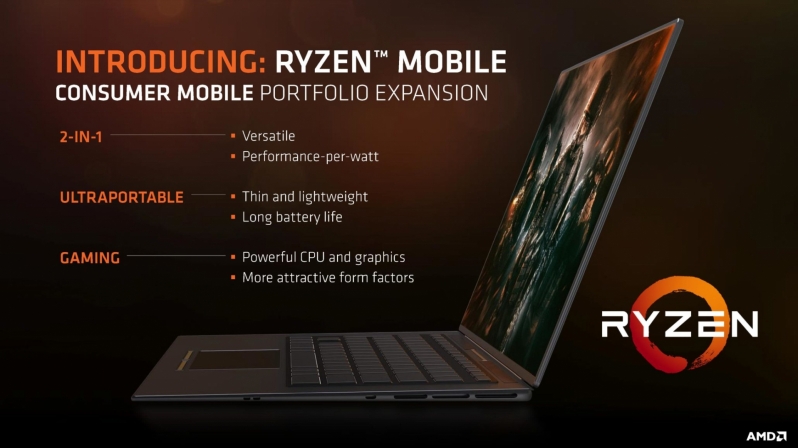 WYP
Quote:
Their higher core count CPUs don't have iGPUs, making them a non-starter in the laptop market for the most part. There are a few notebooks with their Six-core and eight core models though Ryzen 5 2600 and Ryen 7 2700, but they are not really "small and light".Quote

ET3D
Quote:
Me too. While WYP has a point, gaming and workstation laptops come with discrete GPUs and a Zen+ CPU would likely reach pretty good performance at 35-45W, making for a potent combination.Quote

grec
Quote:
Very doubtable. Would almost certainly just result in significant portions of dark silicon or such cripplingly low clocks you'd probably be better off with dark silicon. You have more waste heat due to having to have two memory controllers, two banks of memory, external chipset(The APUs are a full SoC), ect that in total would almost certainly lead to at least 20Ws of wasted energy in comparison to an APU based system. And this is besides the fact you'd likely have needed 70W+ minimum from the get go to make proper use of more than one CCX and 11 Vega cores without them throttling.Quote

NeverBackDown
Quote:
Pretty sure he was referring to a Ryzen non APU chip with a dedicated Nvidia graphics as an example.Quote
Reply