It won't be long before we see these hit retail shelves

AMD has revealed more information about its Ryzen Mobile 4000 series processors, the CPU series which is set to secure AMD a stronger position within the mobile CPU market. The series brings AMD's mobile offerings to 7nm and delivers major improvements to both the CPU and graphics components of AMD's mobile APUs, changes which will make AMD much more competitive with Intel.

The laptop market currently accounts for over 60% of the consumer CPU market, making strong performance from AMD a key way for the company to gain market share from Intel. AMD claims that its latest processors can surpass Intel in all key areas, making 2020 a big year for AMD's notebook ambitions.

Yes, AMD wasn't able to upgrade to Navi with this release, but that hasn't stopped them from offering significant gains in graphics performance. For starters, AMD has been able to increase its GPU clock speeds and GPU efficiency significantly. AMD has claimed that they have achieved a 59% increase in per CU performance with Ryzen 3th Generation Mobile, thanks to AMD's clock speed and efficiency gains.

AMD has also confirmed that what it has learned for Vega Mobile has also translated into future Radeon desktop architectures, partially explaining the performance/watt gains of RDNA 2.

Up to eight cores at 45W

Both H and HS processors will be available to customers, with HS series products representing AMD's HS series being power-optimised versions of AMD's Ryzen mobile CPUs. These CPUs are HS, which stand for high-performance slim. These CPUs are designed for thinner notebooks and are said to be more efficient than normal H-series chips, that said, these processors will feature lower average clock speeds while maintaining the same boost clocks.

AMD's HS series is somewhat equivalent to Intel's Project Athena and Nvidia Max-Q specifications, requiring notebooks to meet specified standards to be worthy of the HS label. It's more than just downclocking to meet a specific TDP envelope. Lover TDP U-series variants will also be available for ultraportable notebooks.

Desktop-grade performance on a laptop?

AMD released the slide below at CES to highlight how much performance their Ryzen 7 4800H processor offers to gamers and workstation users. This kind of performance firmly places AMD within the high-end of the mobile CPU market, delivering higher performance than a lot of desktop systems. 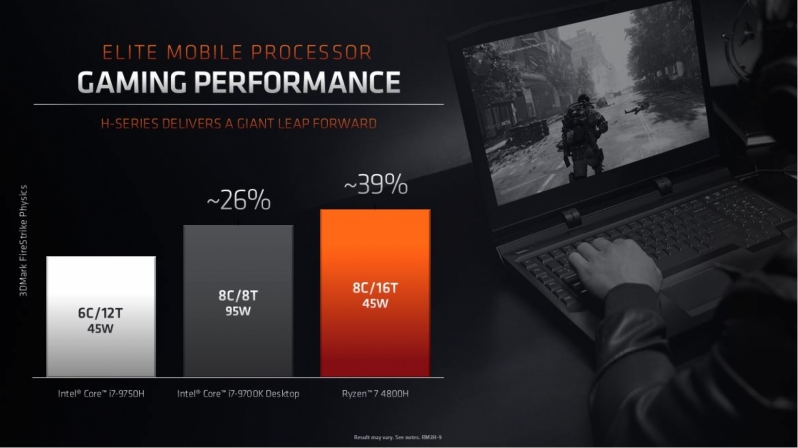 And now we wait

We will need to wait and see how much performance AMD will really be able to offer within the mobile market, but as it stands, AMD is poised to take some market share from Intel, assuming their performance claims turn out to be true.

AMD will need to confirm its battery life and performance claims to secure sales, and for that, we need to see these notebooks in the hands of reviewers. As nice as AMD's data is, we need to see 3rd party confirmation before we fully buy into the hype. AMD's Ryzen 4000 series APUs certainly marks a huge improvement for the company, but it remains to be seen whether or not this will secure AMD a real-world performance and power advantage over Intel.

You can join the discussion on AMD's Ryzen Mobile 4000 series processors on the OC3D Forums.