AMD's AM4 socket is getting a last hurrah!

AMD's Zen 4 processors are due to launch in H2 2022 alongside AMD's new AM5 motherboard platform, bringing to an end the AM4 era. That said, AMD's AM4 socket is not dead, and AMD plans to unleash a new Ryzen 5000 series processor that promises a generation leap in gaming performance. That's right, V-Cache is coming to Ryzen.

At CES 2022, AMD revealed a single V-Cache enhanced Ryzen processor, the Ryzen 7 5800X3D, a new AM4 processor that promises to deliver an average performance boost of 15% in gaming workloads when compared to a Ryzen 9 5900X, which is currently AMD's fastest gaming CPU. In AMD's testing, performance gains of between 9% and 36% are showcased, highlighting the performance benefits that a larger L3 cache can deliver.

When compared to AMD's standard Ryzen 5800X, AMD's Ryzen 7 5800X3D features 96 MB of L3 cache. That's a 3x increase in L3 cache size over a standard Ryzen 7 5800X. Aside from that, the CPU is almost identical, featuring the same core count and thread count. 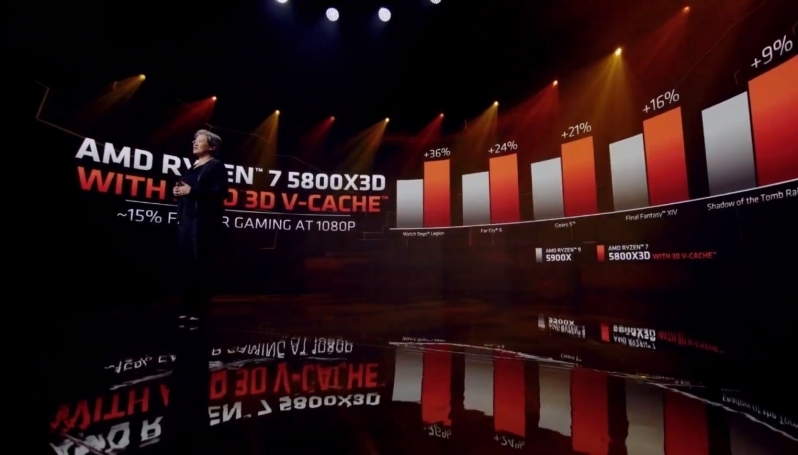 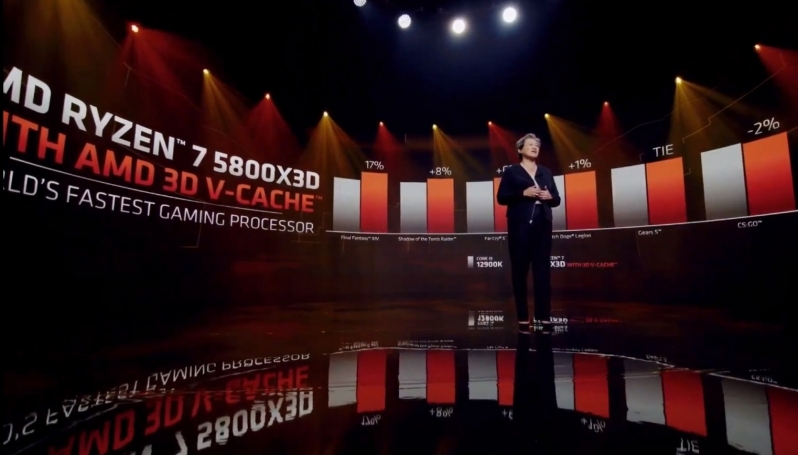 With these results, AMD has claimed that they have created the "world's fastest gaming processor", delivering performance advantages as large as 17%. This is good news for AMD, as it gives AM4 users a clear upgrade path that doesn't require a new memory standard or a new motherboard. Upgrading to a Ryzen 7 5800X3D will be cheaper than an upgrade to Alder Lake.

AlienALX
Oh what a fantastic name choice there. Not.

FFS at least call it a 5850 or something to stop the confusion.

Dicehunter
Going by their last claim of "best" it'll be in very select titles likely with very select settings.Quote

Dark NighT
Should have called it the X58++++++ maybe then it would make people laugh and be excited no?

AlienALX
TBH having read all of it I think that.

A. You would be silly to upgrade to this (because tbh there's nothing wrong with the 5000 series as it stands) and
B. If you were buying from new Intel would likely work out cheaper. There are DDR4 boards for Alderlake you know.

TBH if I already had a 5000 CPU I would not touch this with the new one coming out shortly after. This all seems like a stop gap to me.Quote

WYP
Quote:
Yes, but it supports motherboards that go all the way back to X470/B450. Those users could be using Ryzen 2000 series CPUs.

This is a huge upgrade for Zen+ and Zen 2 users, and it would be a cheaper upgrade than going to Alder Lake or AM5 when the time comes.

It's not a huge upgrade for Ryzen 5000 series users, but users of older Zen CPUs will see huge gaming benefits.Quote
Reply