Over the past few years, AMD has not had much success in the CPU and server market, so much so that their market share in the server market dropped from a high of 30% to below 1%.

With their new Zen architecture and their Naples server platform, AMD plans to hit the server market in a big way, with plans to offer CPUs with up to 32-cores and 64-threads and significant increases in both performance per watt and performance per clock (IPC) when compared to their older offerings.

AMD's new Zen architecture and their move to 14nm FinFET has allowed AMD to create CPUs that have higher core counts and much greater efficiency that they ever have before, making their offerings competitive in the modern server market, though the story of AMD's Naples server platform does not end there. 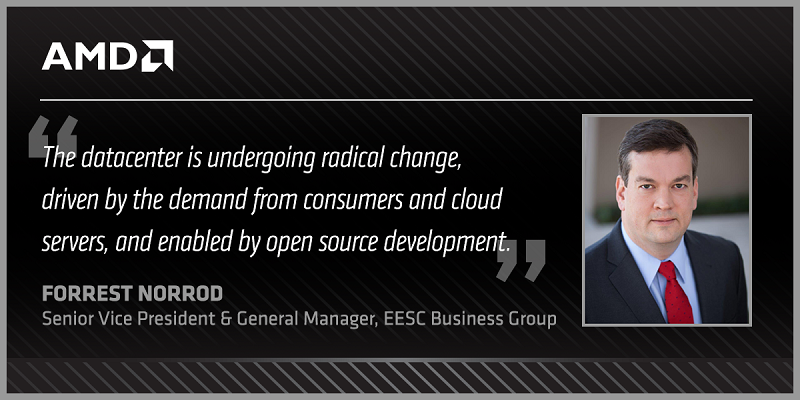 With Naples, AMD wants to offer high levels of CPU performance and connectivity in both single processors servers (1P) and dual processor (2P) servers, with recently leaked information stating that AMD's Naples platform will support up to 128 PCIe 3.0 lanes.

Connectivity is very important for modern servers and providing this many PCIe lanes in a dual CPU platform will offer their customers with a lot of value for money, especially if they want to take advantage of GPU-based compute or take advantage of large banks of PCIe-based NVMe storage.

With such a large amount of PCI bandwidth at their disposal, AMD is looking to take Intel out of the high performance compute market by allowing platforms to be created that can heavily utilise both CPU and GPU resources. This is key for both the future or Radeon and AMD's CPU division, as it will allow servers to be created that can take advantage ludicrous amounts of GPU and CPU horsepower for AI and other complex calculations.

AMD's Naples CPU platform is also said to feature 8 memory channels, offering AMD servers insane amount of memory bandwidth and capacity, which is something that will be very beneficial for compute given Vega's new memory architecture. This will allow an AMD powered server to use GPU compute with some exceptionally large datasets, which will be very beneficial for large rendering machines and other GPU-based tasks that require larger than average datasets.

The Naples CPU platform looks like it will be making a huge impact on the global server market, especially for those that are looking to deliver GPU-based analytics or compute solutions. It seems that Intel is going to have to work hard on their next generation server platform, as it seems their market dominance may be close to an end.

You can join the discussion on AMD's Naples server platform on the OC3D Forums. Find all of the latest PC hardware and gaming news on the OC3D Homepage.

Thelosouvlakia
AMD also has "virtualGPU" technology which will allow their enterprise server GPUs to be pastthrough virtual machines, this could be proven really usefull for render servers and thin pc clientsQuote

RobM
AMD whilst being the underdog do have a habit of being quite resourceful and innovative especially when considering the difference in funds with the competition.Quote

NeverBackDown
Should be noted though.
Gaining market share will be very difficult. With everyone already using software designed specifically for Intel and all there features, or I/O. It will be probably about a year before software can be transported over to support AMD in the same way. In addition they have to be that much better than Intel for people to consider switching, otherwise they will just use AMDs new CPUs as a bargaining chip over Intel to force them to cut prices down. They have a very long tough road ahead.Quote
Reply