While we can never guarantee that any given product is going to be well received, we can say with great certainty that AMD's 3rd Generation Threadripper processors will address most of the shortcomings of the company's existing Threadripper/TR4 lineup. With both Ryzen and EPYC AMD has shown the merits of its new multi-die CPU architecture, and those same benefits will extend to Threadripper.

Today, what appears to be a Ryzen 3rd Generation Threadripper processor has appeared on the Geekbench database, offering users 32 cores, 64 threads and a base clock speed of 3.6GHz. This processor is using an "AMD WhiteHaven" motherboard, suggesting that this is a Threadripper series CPU, as WhiteHaven is AMD's Threadripper codename. Beyond that, the performance offered by this processor is much greater than what is possible on AMD's existing Threadripper series processors, offering a single-threaded score of 5932 and a multi-threaded score of 93344. This benchmark listing was first spotted by momomo_us on Twitter.

To put this score into context, our Rzyen Threadripper 2990WX review lists a stock Geekbench single-threaded score of 4961 and a multi-threaded score of 31985. Yes, AMD's alleged 3rd Generation Threadripper processor delivers a Geekbench multi-threaded CPU score that's almost 3x as high as a 2nd Generation Threadripper processor with the same core count. While these performance gains won't apply to all workloads, it clearly showcased the benefits of AMD's new multi-die CPU architecture. 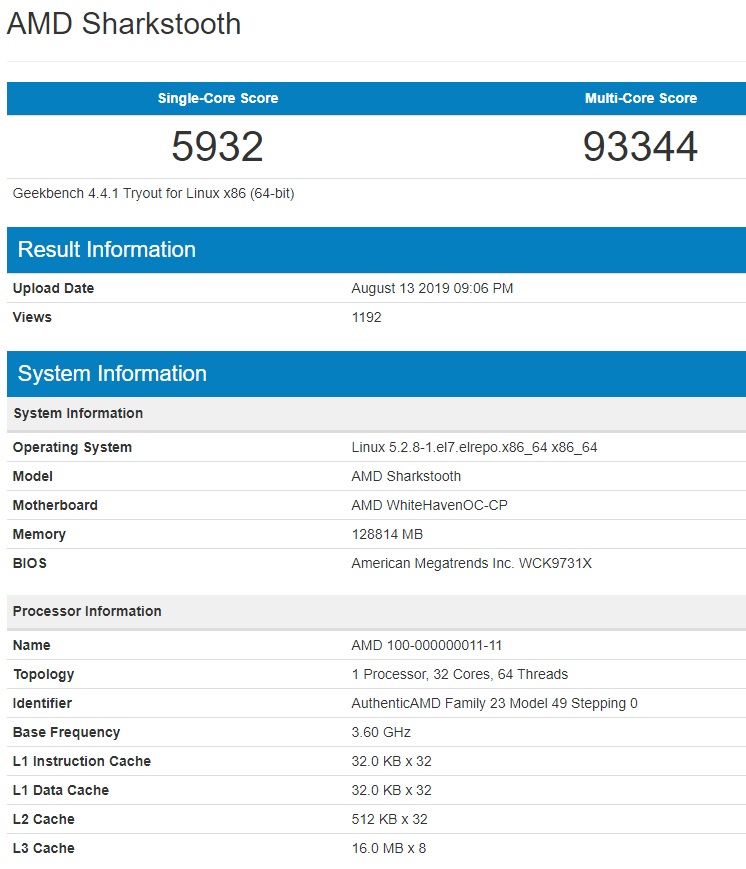 With Zen 2 AMD has proved that a multi-die processor is possible with minimal downsides. We have found no workloads where AMD's Zen 2 processors perform worse than their single-die Ryzen 2nd Gen counterparts. This showcases the power of AMD's latest designs. With Ryzen 3rd Generation Threadripper, these gains will be amplified. In short, AMD has addressed the main criticisms of Threadripper in one fell swoop by delivering what's effectively a beefed-up version of the company's AM4 Zen 2 offerings.

Unlike AMD's existing Threadripper processors, Ryzen 3rd Generation/Zen 2 Threadripper will utilise a single, unified memory controller on a separate I/O/memory die. This is similar to what AMD has shown with their Zen 2 EPYC processors. With 3rd Gen Threadripper, AMD can deliver a true quad-channel memory setup with identical memory access latencies to all CPU cores. This is impossible on AMD's previous multi-memory controller solution.

You can join the discussion on AMD's Ryzen 3rd Generation Threadripper processors on the OC3D Forums.

RobM
wow that is impressive indeedQuote

grec
Nice to see how well MCM tech has matured already thanks to AMD's pushes, 5-9 dies on a single package, almost every one a top end gaming CPU in itself, without caveats.Quote

In lengthy and massively threaded tasks, that base clock is much more important than the single core boost. That's pretty insane.Quote

Thanos
Quote:
From that same review

Note that Base clock under Linux Geekbench 4 doesn't necessarily mean the same as the actual CPU specification base clock. 3x the performance is stretching things, by a lot. Also we don't know the RAM speed for SharksTooth and that can have quite an effect too.Quote

Jaxel
250W TDP just doesn't do it for me man...Quote
Reply