AMD has released new Zen 4 gaming benchmarks, highlighting the performance gains that their Ryzen 5 7600X offers over its Zen 3 counterpart, the Ryzen 5 5600X. On average, AMD has claimed that their new Zen 4 processor can offer 21% faster gaming performance on average when tested with a Radeon RX 6950 XT at 1080p high settings.

While some games seem minimal performance gains with Zen 4, like Grand Theft Auto V and CS:GO, others see massive performance gains, with Middle Earth: Shadow of War, F1 2021, and Rainbow Six Siege seeing 34%, 36%, and 40% performance gains respectively. These gains are huge for AMD, especially after considering that AMD's new Zen 4 CPUs do not utilise the company's V-Cache technology.

AMD's boosted gaming performance with their Ryzen 7000 series comes thanks to AMD's architectural changes with Zen 4 and its increased clock speeds. AMD has described Zen 4 as a refined version of their Zen 3 CPU architecture, a design that has been shrank using TSMC's 5nm lithography node and re-architected to maximise performance. 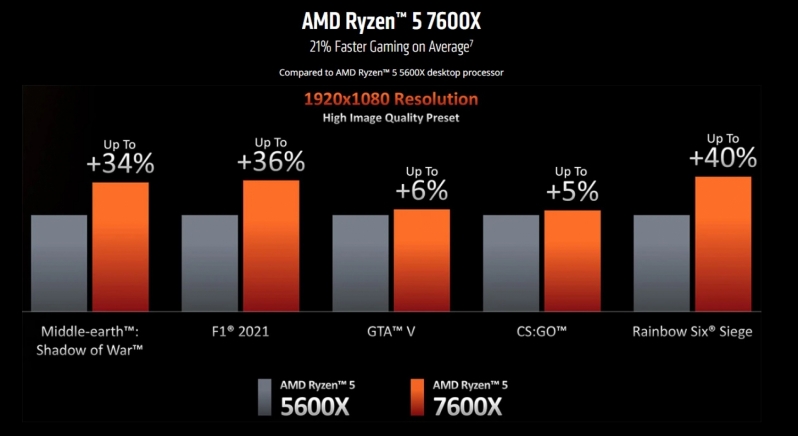 AMD has also compared their Ryzen 6=5 7600X to Intel's i9-12900K, showcasing a 5% performance lead over Intel on average. These are excellent gaming numbers for AMD's 6-core Zen 4 model, and better results are expected from AMD's higher core count offerings.

Comparing AMD's benchmarks above and below, we can see that Intel's i9-12900K has a significant performance lead over AMD's Ryzen 5600X in games. While AMD's performance gains with Zen 4 are impressive, it highlights how far Intel were ahead in many gaming workloads with their 12th generation Alder Lake processors. 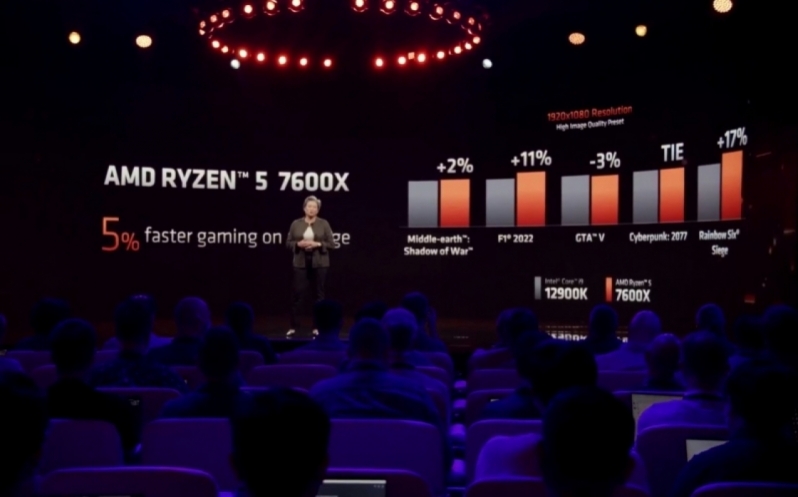 With Zen 4, AMD has claimed performance leadership in games, even without their performance boosting V-Cache technology. If AMD released Zen 4 processors with V-Cache, AMD will be able to deliver even higher levels of gaming performance level.

You can join the discussion on AMD's gaming performance gains with Zen 4 on the OC3D Forums.