Let's hope that these preliminary prices are inaccurate

Rumour has it that AMD's Ryzen 7000 series processors are launching later this month, upgrading AMD's high-end products with Zen 4 CPU cores, integrated graphics, and additional benefits though AMD's new AM5 CPU platform. Consumers expect big things from AMD's Zen 4 architecture, and a new listing from a Canadian retailer has revealed four Zen 4 products and some preliminary prices for them.

As spotted by @momomo_us on Twitter, the PC retailer PC-Canada has listed AMD's Ryzen 9 7950X, Ryzen 9 7900X, Ryzen 7 7700X, and Ryzen 5 7600X processors. These processors are tray CPUs for OEMs that do not ship with retail packaging or included heatsinks. The preliminary pricing of these processors are as follows.

With these prices coming from early retail listings, it is likely that these early CPU prices are inaccurate. However, rumour has it that AMD will be increasing the price of their high-end Ryzen 7000 series CPU models. We should wait for AMD to reveal finalised pricing before concluding anything about AMD's Ryzen 7000 series, as placeholder prices are frequently set higher than official prices. 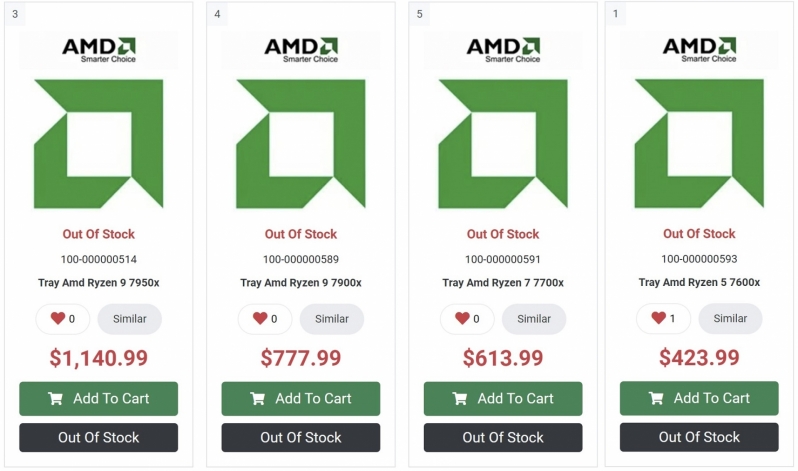 What to expect from AMD's Ryzen 7000 series

AMD has showcased 5+GHz clock speeds from their Zen 4 Ryzen silicon on multiple occasions, confirming that the company's Ryzen 7000 series processors will feature much higher core clock speeds than their predecessors. When combined with other core and architectural design changes, we should expect significant increases in both single-threaded and multi-threaded performance with AMD's Ryzen 7000 series processors.

AMD has confirmed that Ryzen 7000 series processors should offer users a greater than 15% increase in single-threaded performance. In theory, this means that +15% performance gains are the minimum that we should expect from Zen 4 processors. Even higher gains should be possible in specific workloads.

You can join the discussion on AMD's first Ryzen 7000 series CPU listings on the OC3D Forums.

AngryGoldfish
I do hope those prices are not true. They'd be giving Intel too high of a chance to easily beat them in a few months time if they do.Quote

robbiec
Quote:
How come? What does Intel have to go up against the R9 7950X? These prices look to be the same as (inflation adjusted) the original pricing of the 5000 Series.Quote

smilertoo
If they're going to bump up the price of the top two they better be adding pcie lanes or something to justify it.Quote

Digikid
As a Canadian this looks normal. We have to pay customs, environmental fees on electronics, and other BS stuff our moronic government comes up with.


This is no surprise whatsoever.....I can only imagine how much the boards are going to cost.

Looks like it is PC-Canada that listed these prices.Quote
Reply