Does AMD's V-Cache have a latency penalty?

AMD V-Cache Tested - Does V-Cache have a downside?

When AMD revealed its 3D V-Cache technology, there was a question that needed to be answered. Does V-Cache have any performance downsides? Larger caches typically come at the cost of increased latencies, and with V-Cache AMD's boosting the 32MB L3 Cache on their 8-core Zen 3 chiplets to 96MB. Does that 3x boost in L3 cache increase the cache's latencies? Chips and Cheese have the answer!

Having gotten hold of a AMD EPYC 7763 (Milan) and an AMD EPYC 7V73X (Milan-X) processors for testing, allowing them to deliver comparative testing for both CPUs. In their early tests, Chips and Cheese compared the cache and memory latencies of both chips in terms of line latency and cycle latency, revealing that AMD's new Milan-X processors only feature a minimal increase in L3 cache latency of only 3-4 CPU cycles. That's nothing when your processor's running in at clock speeds in the GHz range.

Ideally, all memory would interact with processors with minimal latencies, allowing CPUs to act quickly when new data is delivered, decreasing idle time, boosting system performance, and increasing the overall efficiency of systems. Sadly, memory latency is a problem that is challenging to overcome, and that is why on-CPU caches are so beneficial to modern processors.

Caches allow data to be stored on your processor, keeping data close to your system's number-crunching cores for quick and easy access. These caches are split up into layers, L1, L2, L3 etc, with lower level caches offering minimal latencies (often being within CPU cores), while larger caches offer larger latencies, larger capacities and are directly connected to multiple CPU cores.

Larger caches allow more data to be stored on-chip, minimising the number of times that data needed to be taken from system memory. System memory, DRAM, has latencies that are orders of magnitude longer than on-chip caches, which means that your CPU will need to wait for that data in the meantime and performance is left on the table. Larger caches can help to minimise your CPU's idle time by keeping more data on-chip, where it can be accessed quickly. 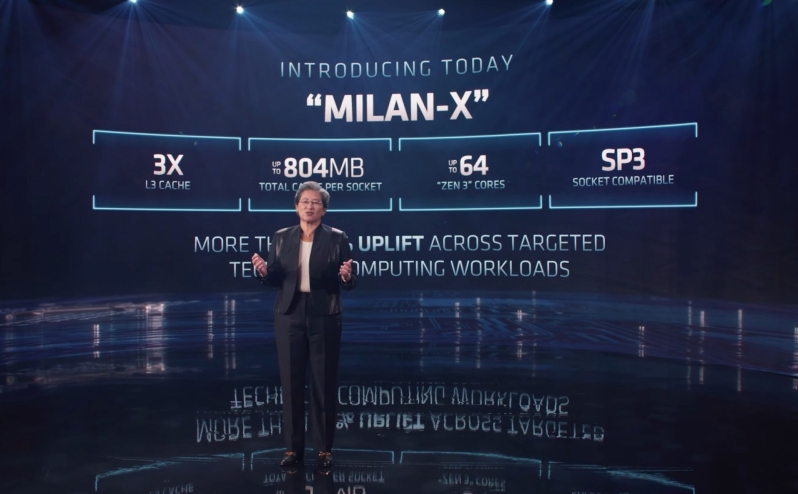 Does V-Cache have a downside? - V-Cache Latency Tested

With AMD's Milan-X processors, AMD has managed to increase the size of their L3 cache size by a factor of three. Given V-Cache's minimal latency penalty, the technology can be said to have no real downside for AMD aside from cost. V-Cache chiplets and packaging costs matter, but in terms of raw performance, AMD's V-Cache tech has no real downsides.

When AMD revealed Milan-X the company stated that targeted workloads saw performance increases of 50% on average (November 2021), highlighting how important large caches can be for data-heavy workloads. That said, not all workloads benefit from larger caches, making V-Cache a feature that is not worthwhile for everyone. That said, for workloads that exploit it, V-Cache is a revolutionary add-on.

(Chart from Chips and Cheese)

Why V-Cache Matter for Consumers - Gaming!

AMD's launching V-Cache enhanced CPUs to consumers this year with their Ryzen 7 5800X3D (January, 2022). With this processor, AMD has claimed that they have created the "World's Fastest Gaming Processor".

Gaming workloads are latency sensitive, which is why fast DRAM with low CL timings are often recommended for gaming PCs. With this in mind, AMD knows that adding a large L3 Cache to their Ryzen CPUs will deliver a significant boost to their gaming performance, highlighting a 15% performance benefit on average across a range of popular PC titles.

As you can see in the image below, larger gains of 36% are possible in some games, with Far Cry 6, Watch Dogs Legion, and Gears 5 all showcasing 20+% performance gains thanks to AMD's addition of V-Cache. 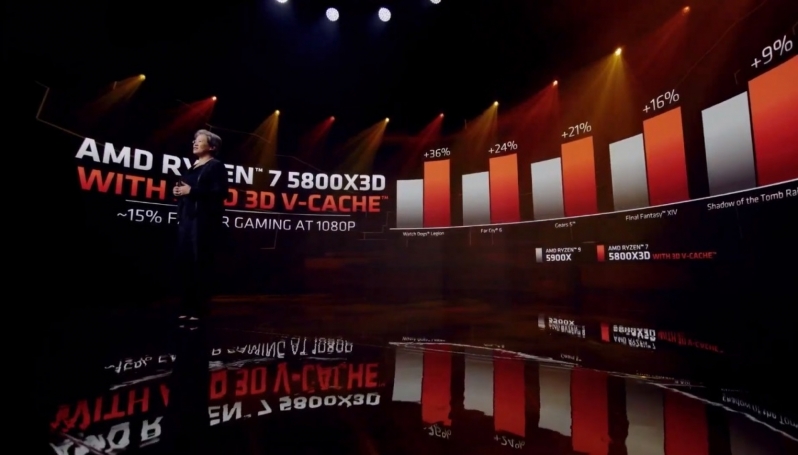 You can join the discussion on AMD's 3D V-Cache technology on the OC3D Forums.

WYP
Quote:
Pat is really pushing things when he says stuff like that. While Alder Lake is a good product, it is not ahead of Ryzen in all areas. That said, Alder Lake should be excellent in gaming laptops, where AMD's CPUs tend to have much less cache.

Intel still needs to prove that they can execute, and they need to do something about EPYC in the enterprise market. Intel are not out of the woods yet. Alder Lake was a big step, but they need to keep taking steps forward. Zen 4 is coming later this year.Quote

Dicehunter
Quote:
Based on current info we'll be seeing Raptorlake and Zen 4 around the 2nd half of the year, Will be very interesting seeing the competition.Quote

AlienALX
Quote:
If he is saying that just to mouth off then fair enough. If, however, they are already on their next true shrink? then he may well be right.

Obviously they can't compete at all in the server space, but that has never mattered much. People will still go Intel.

That said when Intel do catch up? then yes, AMD will fall behind. Ryzen is really good, but has relied *a lot* on mistakes and luck for Intel. When Ryzen launched it was the same sort of IPC as Broadwell. Which at the time wasn't exactly great, given it started as a failed shrink. Remember the desktop Broadwell CPUs? most won't, as they were only out for about two weeks then discontinued and that was because they clocked like dog crap and were useless for desktops. Good for servers, mind, but yes, clocks were poor.

Ryzen has since shrunk. And is about to again. However, you need to remember they are on a lower node than Intel are, so when Intel reach that node? it's quite clear their technology will beat AMD. Which isn't surprising, given they are Intel and have cavernous budgets.

When the Ryzen 5000 series launched Linus joked "It'll take Intel two years to catch up !" and that was about spot on tbh. They've now caught up. Just. However, it is what they do next and after that that will IMO put them way back ahead.

I hope they haven't forgotten what it feels like to be the under dog and offer value, because right now? they totally have.

As of now? the Intel fanboys who have been dormant are starting to show up again on enthusiast forums. Which is really, really dangerous for AMD. Mostly because they just make every one feel like they felt before Ryzen and that is the only serious choice is Intel. That mindshare has not gone away and it certainly won't when Intel take the lead back.

I just hope AMD are planning way ahead of Ryzen.Quote

WYP
Quote:
It will be a very interesting time. Raptor Lake looks promising if it delivers what's expected.Quote
Reply