Could this APU be a budget gamer's dream?

It looks like AMD's revealing a new mainstream laptop APU at Computex 2022, a quad-core CPU known as "Mendocino" that features four cores and an RDNA 2 integrated graphics chip. This APU will be build using TSMC's 6nm lithography process, and it is projected to deliver a 10+ hour battery life for mainstream $399-$699 laptops.

Based on what we know about Mendocino, it's APU sounds a lot like what Valve has used to create their Steam Deck gaming system, as it also features four Zen 2 CPU cores and an RDNA 2 based graphics component. That said, it remains to be seen how powerful this chip's RDNA 2 GPU is, and what memory type this new APU can be paired with.

If this new laptop APU proves to have a respectably powerful iGPU (integrated GPU), AMD's new Mendocino chip could be an excellent chip for low-end PC gaming, especially if you want to play some older PC titles. A moderately powered APU and access to a gaming library service like Xbox' Game Pass for PC, and PC gaming newcomers will have a great time. 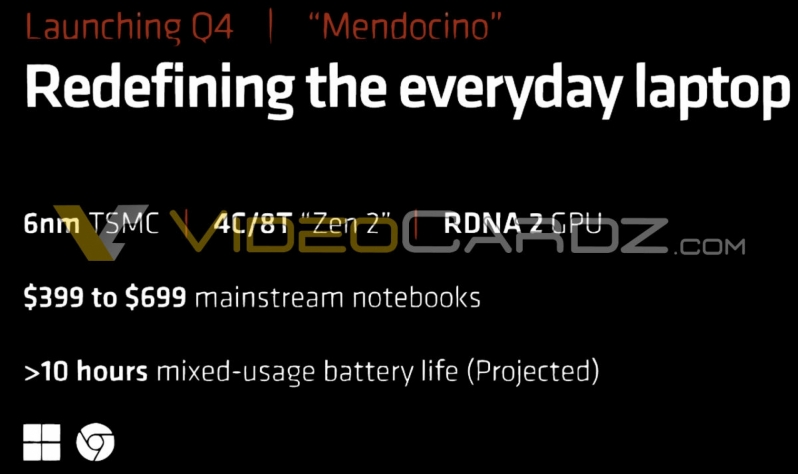 With four cores and eight threads, AMD's Mendocino APU will not exactly be a powerhouse in gaming and non-gaming workloads. That said, this chip is designed to be affordable and capable, making it a great option for mainstream Windows devices and Chromebooks.

You can join the discussion on AMD's Mendocino mobile APU on the OC3D Forums.

ET3D
What iGPU is the real question.

The Steam Deck has 4C/8T Zen 2 and 8 CUs. If this is the same (and it would require LPDDR5 support), then it will be a decent basic gaming CPU.

If on the other hand we're looking at 6 CUs and down (or LPDDR4) then we're probably back to Vega levels, which isn't bad but not as exciting.

Not that it's strictly bad. 4C/8T Zen 2 + 4 CUs will likely have about the performance of a 5300U, and that's still usable for gaming.Quote
Reply