AMD's AM5 platform will fall behind Intel when it comes to PCIe 5.0 adoption - Leak Confirms

AMD will be behind Intel with PCIe 5.0, but does this matter?

AMD's AM5 platform will fall behind Intel when it comes to PCIe 5.0 adoption - Leak Confirms

Yesterday, Intel released a tonne of information about their new Alder Lake processors, confirming that they will support PCIe 5.0 when they launch later this year. This should allow Intel to become the first x86 manufacturer to release PCIe 5.0 compatible hardware, ushering in a new era of high-speed connectivity.

Thanks to TechPowerUp, who has reported on AMD documentation leaked through a recent ransomware attack on Gigabyte, we've had a look at a block diagram for AMD's upcoming AM5 (probably 600-series) motherboard platform. This leaked image confirms that AMD's first AM5 processors and motherboards will lack PCIe 5.0 support, giving Intel a connectivity advantage.

What does AMD's AM5 platform offer?

Based on the block diagram below, AMD's first AM5 series motherboard platform will support a total of 28 PCIe 4.0 lanes, with four being dedicated to AM5 chipset connectivity.

This configuration leaves AMD with 16+4+4 PCIe 4.0 lanes. The first sixteen lanes will be dedicated to PCIe devices like graphics cards, while four will be utilised for M.2 connectivity, and the other four will be used with an external USB4 controller chip. AMD's AM5 chipset can be used to connect an additional PCIe 4.0 M.2 NVMe storage drive alongside a wide range of other devices.

AMD's AM5 socket CPUs will support dual-channel DDR5 memory. The block diagram does not list the supported speeds of AMD's AM5 memory controller, though the DDR5 memory standard is designed with baseline speeds of 4800 MHz (JEDEC DDR5-4800) in mind. AMD's AM5 platform also appears to support DisplayPort 2.0 and USB4 utilising the same I/O ports.

AMD's AM5 chipset appears to be designed to support USB 3.2 20Gbps (USB 3.2 Gen 2x2) ports and can connect to compatible WiFi modules. Since today's AM4 motherboards can already support WiFi 6E, AM5 should also support the WiFi 6E standard. 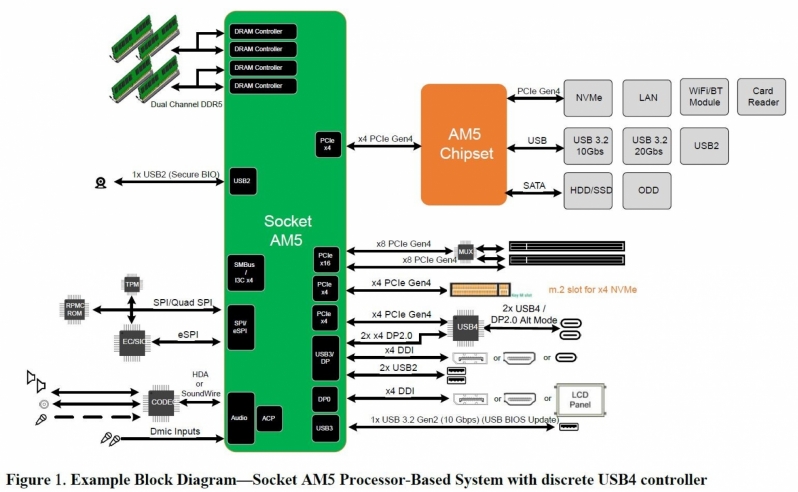 The addition of PCIe 4.0 support was a big deal for AMD when they launched their Ryzen 3000 series of Matisse processors, but does the same hold true for Intel's Alder Lake processors and PCIe 5.0?

When AMD launched their Ryzen 3000 series CPUs, PCIe 3.0 compatible M.2 slots were saturated by the performance of the latest M.2 NVMe storage devices, so much so that it was difficult to differentiate between high-end storage devices. When PCIe 4.0 arrives, there was a genuine need for more bandwidth within some areas of the PC market, and SSD manufacturers were quick to create faster, PCIe 4.0 compatible SSDs.

Today, PCIe 4.0 SSDs are getting close to saturating the PCIe 4.0 x4 connectivity of M.2 slots. Most users currently do not benefit from the additional performance offered by PCIe 4.0 enabled SSDs, making even faster storage devices purposeless for mainstream consumers. While APIs like DirectStorage will change this, it will take a while for most mainstream software to be fully optimised for the NVMe SSD era, making PCIe 5.0 unnecessary for mainstream users.

With Alder Lake, it feels like Intel is forcing through PCIe 5.0 as a headline feature, hoping that consumers will lap it up and invest in a feature that they currently cannot use. In this regard, PCIe feels like a marketing stunt, not a useful feature. When PCIe 5.0 becomes useful to consumers, AMD's next-generation AM5 motherboards will likely support it.

You can join the discussion on AMD's implementing PCIe 5.0 support after Intel on the OC3D Forums. 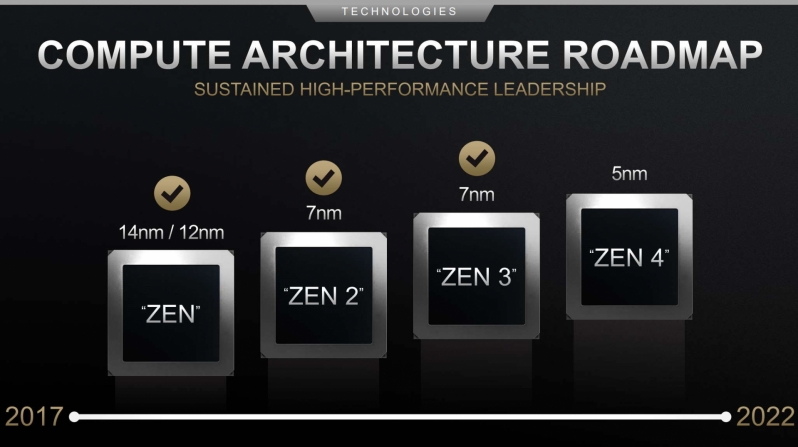 g0ggles1994
Quote:
I agree. But you can guarantee Intel and their fan boys will be screaming PCIe 5 from the rooftops.Quote

looz
Quote:
Why would we when even PCI-E 3.0 is absolutely indistinguishable from 4.0 except for benchmarks. :PQuote

demonking
By the time we have devices that are limited by gen 4 pci-e these systems will be so outdated that you wont want to pair then with these chips.
I mean Sandy bridge was the first to use PCIe 3, imagine how much a 2500k would bottle neck with a 2080ti and that card does not even saturate the connection.
I think it would be foolish to think anyone needs gen 5 at the moment, not in the consumer space anyway and probably rarely in the professional/ scientific useageQuote
Reply