AMD's bringing Zen 3 support to their oldest AM4 motherboards

AM4 motherboards with AGESA 1207 will support AMD's Zen 3 processors, including their Ryzen 7 5800X3D

This update is coming thanks to AMD's AGESA 1207 update, which is due to be implemented by motherboard vendors in April and May. If your motherboard has a BIOS/UEFI update with AGESA 1207 or newer, you will be able to update your motherboard to support all of AMD's Zen 3 CPUs, even their V-Cache enhanced Ryzen 7 5800X3D.

If your motherboard receives an AGESA 1207 update, you will be able to upgrade from AMD's original Ryzen 1000 series processors to AMD's latest generation of Ryzen models. This will allow users of older Ryzen systems to benefit from several generations of hardware upgrades. AMD's latest Ryzen processors can feature higher core counts, larger caches, significant clock speed increases, offer greater power efficiency, and deliver more computational performance per clock cycle. Moving from Ryzen 1000 to Ryzen 5000 will be a huge upgrade for any PC builder. 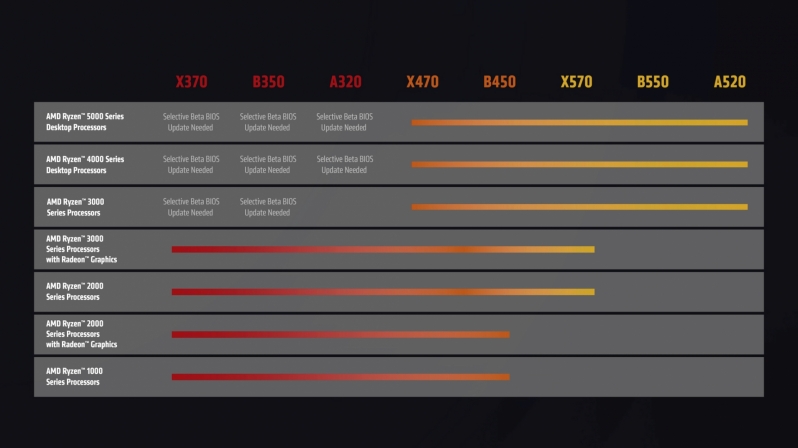 You can join the discussion on AMD's Zen 3 CPUs being officially supported on AMD's oldest AM4 motherboards on the OC3D Forums.

KingNosser
Intresting, use FSR in most games that support it and it's done very well over time even on the higher quality setting i see a nice bump, dying light 2 is the only game i've gone with medium and tbh it done that well also, this could be really good if adoption is similar to the first.Quote

NeverBackDown
All this screams at is there next GPUs probably will have 0 AI instructions which in turn means it'll still only have RT cores. Remains to be seen if that's the right move.Quote

KingNosser
Quote:
With the amount of extra power them next gen cards are going to have i don't see that as a concern, but the prices on all next gen ouch in a big way.

If you thought prices were high now lol just wait.Quote

NeverBackDown
I see it as a big deal. Brute forcing performance is the most nonefficient way to use power. Nvidia's AI accelerated instructions garner you substantial performance gains while not consuming much in the way of power in context of the overall consumption.

If AMD continue to try to win on rasterization they will be continuing down the same path they have been for over a decade. Not being 1st. DLSS is only going to get better and more applicable. Every time it does it hurts AMDs positioning on the market. If a for example 4060 competes with a 7800xt, you could bet what people would end up buying. This is of course a more extreme but it's not without the realm of possibility. Not to mention Intel is coming in and seemingly has AI on board. However that remains to be seen as it's not released.


I also fully expect prices to go up. They'll use the pandemic excuse everybody is but they'll never drop prices back down once supply improves.Quote

KingNosser
Thing is they will have the brute force as it's multi chip also they already use a lot less power and going forward it's Nvidia that is rumoured to have 600watt cards coming. DLSS is not without it's faults i've seen them in the way AI changes things slightly at times from the original. When it comes to DLSS it really depends on the game as to how big a gap there is at times and while I have a 144hz montior even in some new games on rasta I am not getting to that level of fps maybe if i had a 5800x it might be more possible for me.

Prices are going to shoot to the moon, it's not the pandemic you need to worry about not that you ever needed too imho.

AMD have the advantage in multi chip since they already have been doing so with ryzen and with vcache it helps them more so, but i expect in terms of performance it'll be fairly close this one last time but ahead it'll really come down to nvidias implementations on their multi chip and until then they only have DLSS to rely on and while there is a gap it's not as much of an issue as being made out to be.

The other fact is they AMD were not so far away from being bankrupt they don't have the software house size that Intel and Nvidia do at least not as huge and while everyone is saying a 3rd player is needed in the GPU market you could have been looking at one less, being fair to AMD means stating what they have done right and looking between Nvidia and AMD, I think if your honest which one has made more headway lately.

I am Baised and tbh simply supporting the underdog in the fight, as for Intel coming into the market i don't see them doing very well for a time and they are very late to the party.Quote
Reply