AMD's next-generation of EPYC processors are going to deliver a transformative change to the company's enterprise-grade product offerings, with leaks suggesting that the company will offer their users faster PCIe lanes, more CPU cores and additional memory channels with faster DDR memory. If true, these leaks point towards breakthrough server products from AMD, assuming that the company can ship enough products to meet the market's demand for additional chips.

According to ExecutableFix on Twitter, AMD's plans to move EPYC to a new SP5 socket. This move has been on AMD's hardware roadmap for some time, though it looks like AMD plans to deliver its customers more than a simple socket switch with support for DDR5 memory.

Is ExecutableFix is correct, AMD's Genoa (Zen 4) EPYC processors will feature up to 96 cores, 192 threads and utilise an LGA-6096 socket. This platform will reportedly support up to twelve channels of DDR5 memory, CPUs with TDPs of up to 320 watts (configurable to 400 watts) and 128 lanes of PCIe 5.0 connectivity. 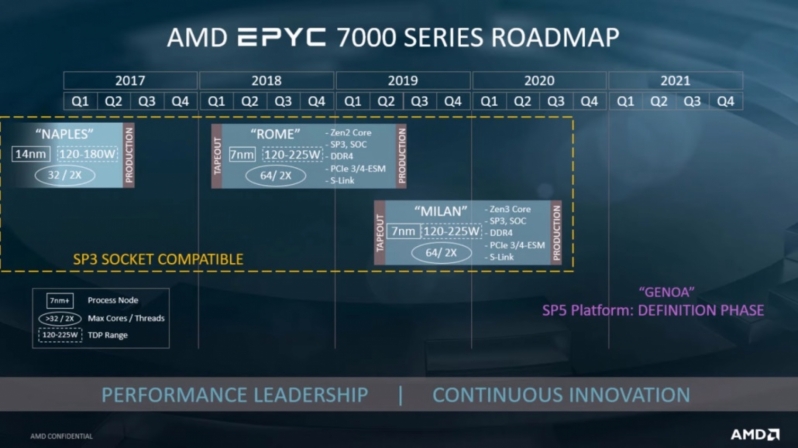 Other rumour sources have suggested that AMD's Zen 4 EPYC processors could feature a 29% IPC improvement over an equivalent Zen 3 Milan processor with the same core count and clock speeds. That alone is a tremendous feat for AMD, especially when Genoa should also offer users more DRAM channels, faster PCIe connectivity and more CPU cores.

AMD's Zen 4 processors are expected to launch in 2022, utilising a 5nm node (likely TSMCs) and a new socket design. At this time, it is unknown when AMD's Zen 4 Ryzen processors will launch, with many suggesting that AMD will release intermediary Zen 3+ processors before launching Zen 4.

Below is a mock-up fo AMD's Zen 4 Genoa design from ExecutableFix. 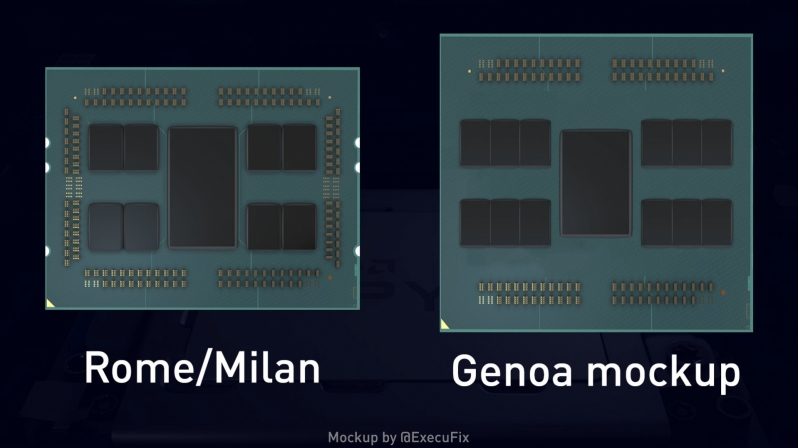 You can join the discussion on AMD's EPYC Genoa processors on the OC3D Forums.

AngryGoldfish
I know a lot of companies will still use Intel for their servers, but 96 cores is insane for any company that moves to AMD.Quote

NeverBackDown
When it comes to HPC they will spend the extra money. They will end up saving time and speeding up research which both costs money.

These CPUs will be pure raw power. Absolutely insane performance going to be coming out of these...Quote

Warchild
And here I am sitting on a 4core CPU.

AMD will be rolling out the QuBit soon.Quote

NeverBackDown
Quote:
As far as anyone is aware they haven't spent any time in research for that on a serious level. Out of the traditional chip makers only Intel has a slight investment into that industry.


They all really need to start hoping on that train. Don't want to be caught behind.Quote

tgrech
Quantum Computers will exists alongside traditional computers, they won't be fast enough in all applications for it to make sense getting rid of traditional computing, so AMD doesn't have much to be worried about.

Their most likely practical use cases will be as accelerator "add-ins" (very large ones) to traditional supercomputers for the first couple of decades. If they can ever scale the cooling challenges and such down enough to be viable for consumers, it will be as an acceleration unit type thing, no one is going to abandon a century of software.Quote
Reply