When AMD released their Zen-based Athlon 200GE processor, they revealed that the processor would be their first locked Zen-based desktop processor, lacking support for precision boost and other performance-enhancing features.

Things have changed over the past few months with the YouTube channel TechEpiphany discovering that the Athlon 200GE is overclockable using certain BIO files, revealing a similar UEFI bug to what was seen in early Skylake non-K processors.

Using this method, TechEpiphany managed to achieve a clock speed of slightly over 3.9GHz, a significant boost over the dual core's default 3.2GHz clock speed, representing an increase of over 20%. Tom's Hardware has managed to validate these findings using an MSI X470 Gaming M7 AC motherboard using its latest BIOS files. 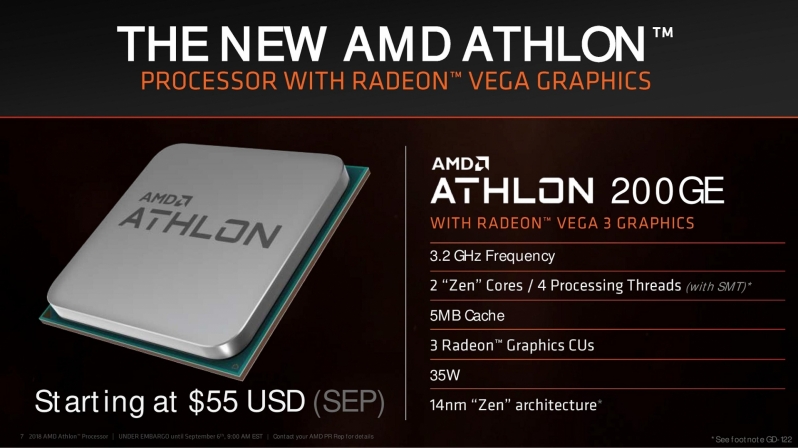 While overclocking a dual-core may not be high on some people's priority list, the performance bump seen here may be more than worthwhile for those who use the Athlon 200GE as a basic desktop machine or as part of an HTPC or a home file storage server. This will push the CPU over its 35W TDP, though depending on the user the additional power draw may be a price worth paying.

You can join the discussion on how new MSI BIOS files have unlocked the Athlon 200GE on the OC3D Forums.

Was only watching a video on unlocking Phenoms to quad core this morning.

ImprovizoR
I kinda can't wait to see the OC results on a $55 chip.Quote

WYP
Quote:
I'll be honest. I'm thinking of building a small file server ATM and the ability to OC this chip could be useful.

Maybe there is a little build log on the horizon.Quote

AlienALX
I would have got one of these for sure but I got a 4590s and 8gb ram for free.

I might, however, build myself a media PC (for music mainly, to hook into my hifi).Quote